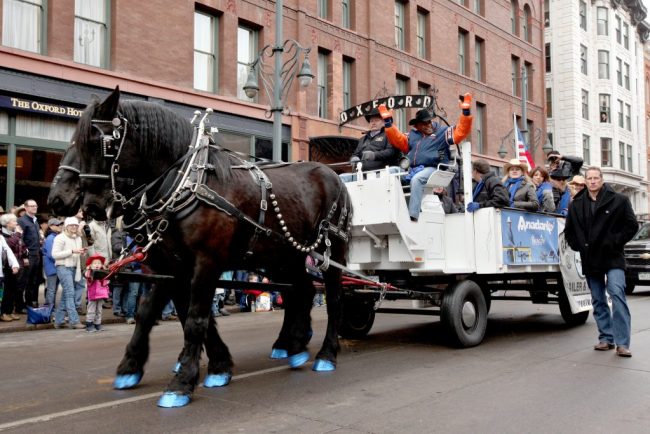 What to do in Denver Every Weekend in January

Denver is kicking off 2019 with several annual favorite events alongside new exhibitions, performances and more. In addition to Denver’s year-round renowned arts and cultural offerings, thriving culinary scene and urban adventure, there are hundreds of exciting events that encourage people to visit The Mile High City and reclaim the weekend.

Below are several events taking place during January weekends; for more, visit DenverWeekends.com or our event calendar.

Denver’s own Colorado Avalanche will take on the Rangers at Pepsi Center.

Movie at the Symphony: Harry Potter and the Order of the Phoenix™ in Concert (January 4-6)

The Harry Potter™ Film Concert Series continues with Harry Potter and the Order of the Phoenix™. The unforgettable score will be performed by the Colorado Symphony as the film is projected simultaneously on the big screen at Boettcher Concert Hall.

Final Weekend of Rembrandt: Painter As Printmaker (through January 6)

Denver Art Museum is the sole venue for Rembrandt: Painter as Printmaker, which showcases more than 100 prints, drawings, and paintings from Rembrandt van Rijn’s career spanning from 1625 to 1665. Unforgettable images of biblical, portrait, allegory, still life, landscape and genre artworks of the time demonstrate the mastery that cemented Rembrandt as one of the greatest artists in history. The exhibition shows how Rembrandt used his view of the world around him to fuel his artistic journey and gives a deeper understanding of his working habits as an artist, and moreover, as a printmaker.

Other picks include Pride and Swagger’s Hot Mess Brunch and Brew You Yoga at Burns Family Artisan Ales.

Several generations of outdoor enthusiasts from Colorado and the Rocky Mountain region attend this annual exposition at the Colorado Convention Center, which features product offerings, destinations, activities and more. The Youth Fair, hosted by Colorado Parks and Wildlife, educates and inspires thousands of future outdoor enthusiasts.

Join Denver Brass at the Ellie Caulkins Opera House as they welcome New York pianist Steven Mayer and the acclaimed Cleo Parker Robinson Dance Ensemble, who will bring to life the great American sounds of Gershwin, Bernstein, Copland and more.

Final Weekend of Above and Beyond (through January 13)

Wings Over the Rockies Air & Space Museum is hosting Above and Beyond, an exhibit that celebrates the power of innovation to make dreams take flight. This traveling aerospace exhibition features immersive simulations, interactive design challenges, iconic historical touchstones, visionary concepts for the future and inspiring stories from game-changing innovators, past and present.

Other picks include the Resolution Brew Run with Resolute Brewing and City, O’ City’s Beat Brunch with DJ Jonny D.

Held every January at the National Western Complex, the National Western Stock Show & Rodeo is the world’s largest stock show; and each year is bigger and better than the last, with more than 15,000 animals, rodeos, bull riders, horse shows, livestock competitions, auctions and booths selling everything from cowboy boots to Native American jewelry.

Performed at the Buell Theatre, Broadway’s hit crowd-pleaser takes audiences to the stoops of the Bronx in the 1960s — where a young man is caught between the father he loves and the mob boss he would love to be. Bursting with high-energy dance numbers and original doo-wop tunes, A Bronx Tale is an unforgettable story of loyalty and family.

Final Weekend of ¡CUBA! (through January 20)

¡CUBA!, the latest major exhibition at Denver Museum of Nature & Science, explores the dynamic culture and abundant biodiversity of the Caribbean’s largest island. Although its complex politics and vibrant music have primarily attracted the attention of the world, Cuba is also home to the unexpected. It is a place of stunning contrasts: mysterious caves and bright boulevards, sweltering fields and cool forests, hard challenges and high energy. This lively experience—presented in English and Spanish—takes a look at the people, landscapes, unique species and daily life of this intriguing country.

Other picks include Denver Museum of Nature & Science’s Dinner and a Movie, screening Oceans: Our Blue Planet 3D in IMAX, Saturday’s Backstage Pass! At Black Shirt Brewing Co. and more.

Featuring the music of iconic bands such as Styx, Poison, Twisted Sister and Whitesnake among many others, this 10th Anniversary production – performed at the Buell Theatre – features a dynamic new cast revisiting the larger than life characters and exhilarating story that turned Rock of Ages into a global phenomenon.

The NBA’s Philadelphia 76ers visit Pepsi Center for a game against the Denver Nuggets.

Established in 2004, the Denver Winter Brew Fest celebrates craft beverages from around Colorado and beyond and features live music, food, and other vendors at the beautiful and intimate Mile High Station.