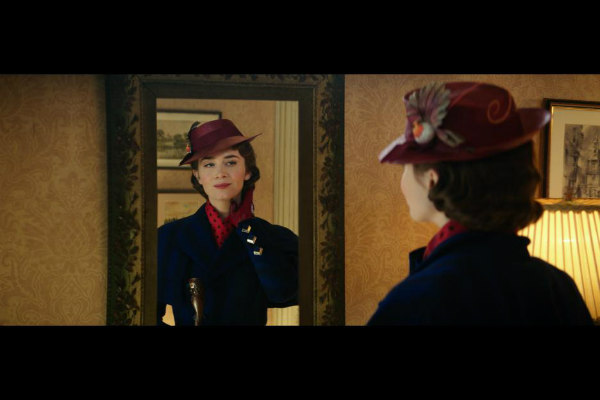 Mary Poppins, queen of all nannies, with her wondrously deep carpet bag and sassy umbrella, floats into London and onto big screens everywhere just in time for Christmas. Emily Blunt has some stylish and magical shoes to fill as she takes on one of the most iconic characters in movie history.

Mary Poppins Returns is not a retelling of the original story. Rather, two decades have passed since the Practically Perfect Mary left with changing winds. Michael and Jane Banks are grown up. Michael (Ben Wishaw), a recent widower with three young children, finds himself about to lose the family home. In his fog of grief, things fell through the cracks. Jane (Emily Mortimer), the steadier older sister, has inherited her mother’s love of political activism. She is a great help to Michael and her nephews and niece, but can’t help heal their wounded hearts. Who can?

Through a lovely nod to the past, Mary is successfully summoned to 17 Cherry Tree Lane, London. She make it clear she is there to help all five of the Banks children. She sweeps in with her crisp, but warm, sense of duty and authority and truly hits the ground running (or swimming?) Nobody has forgotten her and she hasn’t aged a day. Of course.

Every Mary must have her Burt. Mary Poppins Returns introduces us to Jack (Lin-Manuel Miranda), a London lamplighter in a brotherhood that’s just as musical and spry as the chimney sweeps of old. Jack was a child when his friend Burt knew Mary. Jack knew her as well, so when Mary returns he is not surprised by her abilities. He is willing and able to dive right in to all the merry adventures inevitably in store.

Being Lin-Manuel Miranda, it’s a given he will sing and dance. One of the many show-stopping songs, “A Cover is Not the Book” is a cheeky, highly energetic song and dance duet with Emily Blunt. It takes place in a colorful cartoon landscape that is animated in the exact style as golden-age Disney animated movies. It’s absolutely delightful to watch that style after years of slick computer animated fare. The effect of nostalgia it creates is wonderful and warm.

Nostalgia is the foundation of this film. It definitely helps if you and your kids have seen the original 1964 Mary Poppins starring Julie Andrews and Dick Van Dyke (who makes a memorable cameo in this film, too, reprising one of his characters). At times, it felt like Mary Poppins Returns wanted to match the first outing song by song and theme by theme. Even characters have their counterparts. Meryl Streep is Topsy, who reminds us of Uncle Albert. Jack is Burt and the lamplighters are the new chimney sweeps. The bankers continue to be the villains. Colin Firth is Wilkins, the nephew of Mr. Dawes who terrorized boy Michael by wanting his tuppence. Can he be reformed, too? It might take a kite, or maybe this time around, a balloon?

Mary Poppins Returns is visually beautiful. It is packed with fun songs and some heartfelt moments. Grief and loss are central themes and Blunt does a great job walking the tightrope of being no-nonsense Mary with empathy and love for all the children in her care, even the grown kind. Sometimes, the placement and song styles was distracting and took me out of the film. Oh, here is the “Chim Chim Cheree” of 2018. Will “The Place Where Lost Things Go” become the new “Feed the Birds”? Overall, it was a lovely experience to imagine and see Mary return.