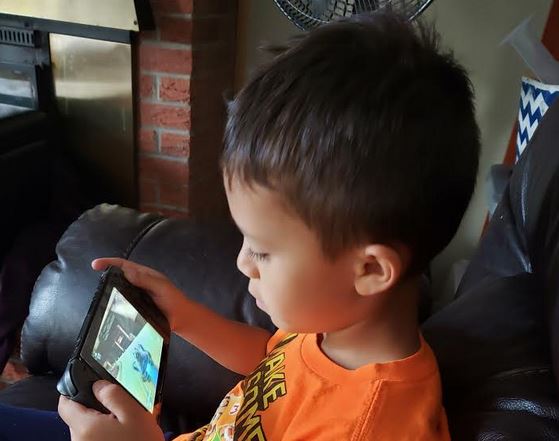 How Much Time on a Device Should Your Kid Have? Part II

Medical and academic professionals agree that excessive screen time for children is unhealthy, for several reasons. In recent studies, psychologists have observed that too much screen time, in fact, is dangerous for kids. Excessive screen time has led to unhealthy attachments to technology. The overuse of devices and technology have been linked to impairing the growth of a child’s brain, which happens to very impressionable during development.

Between birth to three-years old the developing brain is highly sensitive to surrounding environments. Unfortunately, a child has their brain consistently locked on a device, it’s difficult for them to engage and process their environments.

Picture this, your kids’ eyes locked in place (the screen of the device) while the brain is sending signal after signal. At that moment dopamine (which is the feel-good chemical made by the brain) is being manufactured, sending the “I’m happy” signal, ultimately pushing your kid to go further into the technology in front of them.

The intense visualization floods the brain’s activity causing it to become more engaged. Eventually, adapting the brain to heightened stimuli. Over time, just like any other substance, the high or feel good feeling can cause a media dependency.

These developmental components are far too important to the long-term success of a child, just to ignore. Some kids are more sensitive to developing an unhealthy dependency towards electronics and media than others. That’s why they encourage screen time limits.

How Much Time on a Device Should Your Kid Have

The American Academy of Pediatrics (AAP) recently published new media recommendations for each age group in children. The AAP stated, “Problems begin when the use of technology displaces physical activity, hands on exploration and face to face social interaction in the real world, which is critical to learning.” It’s also been seen to cause problems in their sleep patterns.

It may be helpful to determine what is healthy for your family as whole. Identify how much device time is acceptable for everyone in the house. Modeling strong healthy habits to our kids is providing them with the tools they’ll need to be the best versions of themselves in the future.

Check-out Part 1 of this 3-part series for additional information on “The Effects of Technology on Children” and stay tuned for Part 3 next week!

Nicole is a thirty-something mother to four amazing children. They are third generation Colorado Natives, and proud of it. Her life revolves around raising strong, self-confident children. Their family is deep in Colorado adventures and they love sharing their experiences with anyone who will listen. She authors a parenting lifestyle blog at Keepcalmitslife.org, where she focuses on empowering mothers to not be perfect, but simply parent through learning and love.