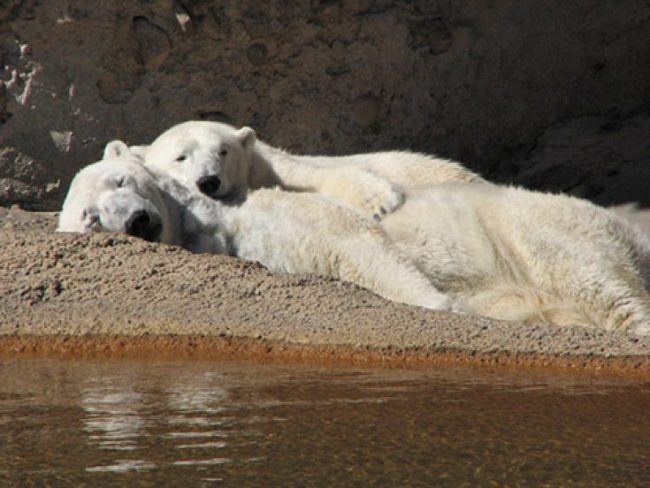 Love. It’s not just for humans.

The Denver Zoo announced this week that its two polar bears, Cranbeary and Lee, will depart this fall to be paired with new mates in the hopes they produce offspring, and so their current exhibit can be repurposed as a new and improved home for the Zoo’s two grizzly bears. Cranbeary, the Zoo’s 16-year-old female, will leave in October for The Alaska Zoo, while Lee, her 18-year-old mate, will depart later in the fall for Columbus Zoo and Aquarium at the recommendation of the Association of Zoos and Aquariums’ (AZA) Species Survival Plan® (SSP). Denver Zoo’s leadership and Board of Governors are committed to bringing polar bears back to the Zoo, which would require raising the necessary funds and sufficient time to plan for and construct a new, innovative exhibit.

“Polar bears are an iconic species and have a long and storied history at Denver Zoo, and we know they’ll be missed by our staff, volunteers, donors and the community,” said Hollie Colahan, vice president for animal care at Denver Zoo. “Denver Zoo is committed to all of our animals, and while our polar bears receive excellent care, it’s important that they are paired with mates who may prove to be better breeding partners. The decision to relocate Cranbeary and Lee will benefit the welfare of both polar bears in the long run. ”

Currently, there are only 44 polar bears in North American zoos, and the species faces increasing threats in the wild. As a longstanding member of the AZA, Denver Zoo is active in a number of SSP Programs, which are collaborative breeding programs that facilitate that survival of the species by keeping zoo populations sustainable and genetically healthy, for a wide range of animals. The Polar Bear SSP is an important element in the effort to ensure the long-term well-being and security of the species.

Denver Zoo’s two grizzly bears, Kootenai and Tundra, will move from Bear Mountain into the existing polar bear exhibit, which will serve as a more suitable and improved habitat following necessary updates and renovations. These and other developments around the Zoo are part of implementing the vision of the “A New Denver Zoo” Master Plan, which was approved by the Denver City Council in 2015, and will ensure the Zoo remains a model for animal care, conservation and sustainability. Guests will start seeing a number of other improvements around the Zoo, including upgrades to existing animal habitats and the construction of a new animal hospital.

Denver Zoo invites the public to come say goodbye to Cranbeary and Lee and learn about polar bears and efforts to protect the species. Guests are encouraged to attend special zookeeper talks in front of the polar bear exhibit every Saturday and Sunday at 12 p.m. starting on October 6. For more information, please visit DenverZoo.org or call 720-337-1400.