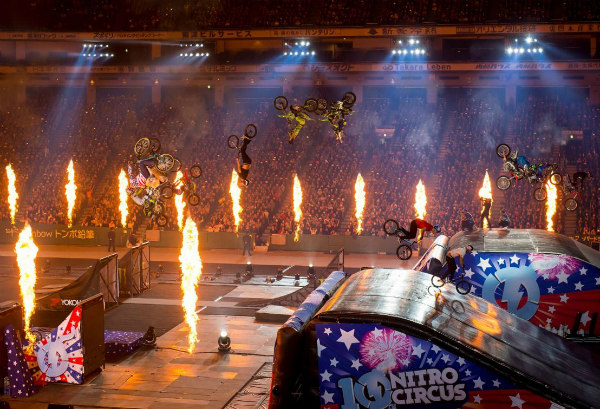 Win Tickets to Nitro Circus: You Got This

Nitro Circus: You Got This is coming to Denver for an October 16 Pepsi Center show. Fans can get a jump on the action, though, with tickets on sale  at nitrocircus.com.

Nitro Circus’ biggest moments, and some of its most notorious crashes, have come from the mind of Travis Pastrana. For the action sports icon, pushing the envelope is just another day at the office. But Pastrana also has the uncanny ability to encourage his fellow riders to go big or go home as well… In some cases despite their better judgment! Now with the 2018 You Got This tour, Travis and company will ramp up the shenanigans with the greatest, craziest, funniest show in Nitro Circus history.

“Nitro Circus is turning me loose! With the You Got This Tour, I’m putting all of my best – and worst – ideas into one huge show. Everything I’ve ever wanted to see live, we’re taking on the road,” Pastrana says. “Expect bigger, brand-new ramps and even more ridiculous stunts. It’s going to be unreal! Look out, though. There may be a few rough landings.”

Nitro Circus: You Got This will feature Travis Pastrana along with Nitro Circus’ best athletes in FMX, BMX, Scooter and Inline, including multiple X Games medalists and several Nitro World Games champions. Pastrana will lead this all-star roster as they attempt both never before seen tricks and completely ill-advised stunts. This tour will debut an audacious production complete with new huge ramps and crazy contraptions. Expect some sketchy challenges to be thrown down. Who will take them up? With this crew, you never know what will happen, but without a doubt You Got This will be totally wide open, with more thrills, more excitement and more irreverence than ever before.

Mile High Mamas is giving away TWO family four-packs of tickets. You may enter as many as five times below.