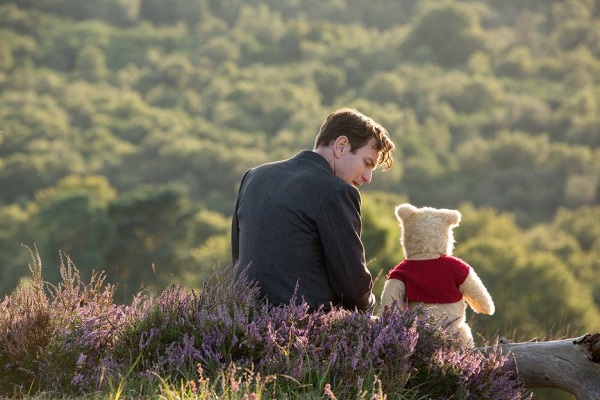 Disney’s latest live-action family film is a trip down memory lane. That lane leads straight to the One Hundred Acre Wood. You know it as the place where a lad named Christopher Robin spent barefoot childhood days with his gang of beloved friends. Where animated Disney films focused on A.A. Milne’s treasured Winnie the Pooh, Eeyore, Piglet, and the other stuffed-with-fluff lovies, Christopher Robin is centered around the boy—and eventually the man— himself.

Through a nicely done montage, we watch Christopher (Ewan McGregor) grow up. He endures heartache. He falls in love with wife Evelyn (Hayley Atwell) and marries. World War Two breaks out. He returns home to a daughter, Madeline (Bronte Carmichael), who was born while he was away. Is he the same person Winnie the Pooh misses and Evelyn married? Does he even remember the silly ol’ bear when career and family pressures mount?

Grown-up viewers will identify with Christopher’s mix of struggles, stressors, and sense that everything idyllic and magical is behind them. jA lot of the more serious elements of the film will sail straight over younger viewers heads. Thankfully, comic relief abounds exactly where you’d expect it:

If you think he’s merely a figment of Christopher Robin’s imagination, you are wrong. Voiced by Jim Cummings, he is as sweet and sticky and earnest as always. But he’s real, real enough to travel to London and get into the kind of trouble you’d expect. Honey is involved. Lots and lots of honey.

The sequences with Winnie the Pooh and friends are delightful, funny, and the best parts of the film. Frequent nods to the Pooh you remember from your own childhood are most welcome. Tigger sings his Tigger song, Eeyore is mopey, Rabbit is bossy, Kanga is calm, Roo is curious, Owl is a know-it-all, and Piglet is worried — yet they are dear friends devoted to messy picnics, Pooh Sticks, and each other.

The pacing can be slow and quiet, particularly as it builds in the first half of the film. It’s directed by Mark Forster, who has directed some very not-Pooh bear films like World War Z and Quantum of Solace. The scenery and mood is one of sun-soaked nostalgia, with waving fields of wildflowers in the English countryside turning into foggy mystery, cold post-war London, and back again.

It’s good to know the One Hundred Acre Wood is out there. Somewhere.