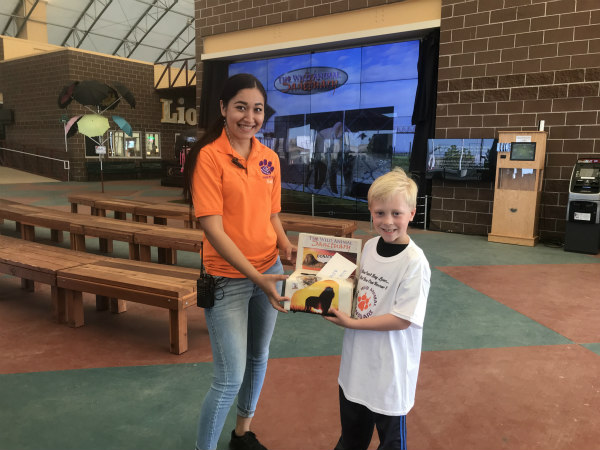 Dreading another birthday party where your kid will receive 20 more plastic toys?  With that in mind, we were trying to come up with an alternative for my son’s 7th birthday.  We talked about options with our son and together we came up with the idea to collect donations for the Wild Animal Sanctuary in Keensburg, Colo. in lieu of birthday gifts at his party. His parents and grandparents would still get him a couple of special gifts.

The whole experience turned out better than we ever expected. Even from the beginning, Xander was super excited to “help save the wildlife.”

Xander made and decorated a collection box.  At his birthday party he collected $370 …when neighbors and close friends found out what he was doing, they voluntarily handed over another $140.  My son added $30 from his allowance that he had been saving for a year and my husband’s company has a match program and gave him an additional $300…bringing his donation collection to $840.

Wow, with that much money, my son had choices to make…what animals should he sponsor? 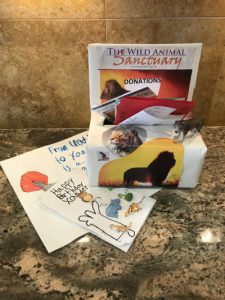 They offer such a cool program at the Wild Animal Sanctuary , whereby You can sponsor various animals at the Wild Animal Sanctuary. Small animals can be sponsored for $120 a year (serval, bobcat, lynx, fox, coyote, coati mundi, raccoon, emu or alpaca); medium animals can be sponsored for $240/year (leopard, jaguar, mountain lion, camel, horse, ostrich or wolf) and large animal sponsorships are $360/year (lion, tiger, bear). The program offers sponsors a photo and information on your chosen animal; medium and large animal sponsors also receive a one-year membership to the Wild Animal Sanctuary (and you can bring up to five guests each visit for no charge).   The nearly 500 animals have bios listed on their site to help you decide whom to sponsor.  https://www.wildanimalsanctuary.org/rescues.

Xander decided to sponsor Zimba a beautiful male lion, Diego a stunning white Tiger and Shaka a male African Serval.  Zimba was a Mexican zoo performer who was surrendered to the Sanctuary because he was too aggressive for performances. Diego is a male White Tiger that was confiscated by the Mexican Government agency due to a history of severe abuse and neglect.  He was rescued from a roadside Zoo where he used to be sedated regularly so people could take pictures with him.  Shaka is a Male African Serval that was being kept in a small cage located in a junk-ridden back yard of a couple living in New York State. Zimba, Diego, Shaka and the nearly 500 animals at the Sanctuary now live a better life thanks to the amazing workers, volunteers and donors.

As parents, we wanted to share this story to help inspire other kids. This has been such a great experience for Xander.  He is genuinely joyful about how he was able to help the animals, he humbly appreciated being spotlighted in the Wild Animal Sanctuary Summer Newsletter (see pages 32 &33), he also loves the human friends he has made at the Sanctuary, and we don’t miss any of the toys he would have received.

Our son is an amazing person and we look forward to all the ways he will continue to make the world a better place.