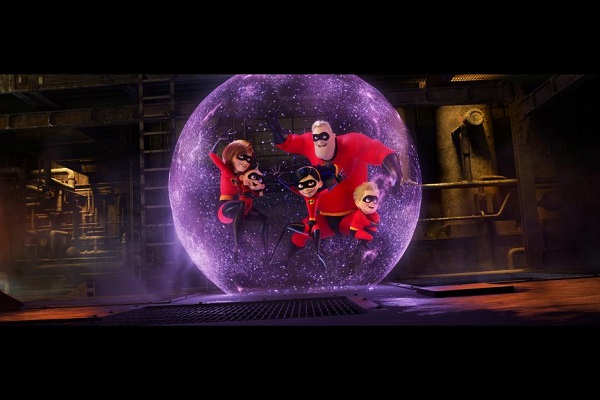 Incredibles 2 is Incredible, Too

It has been nearly 13 years since we met The Incredibles. The family of superheroes zoomed off with our hearts and stretched our imaginations. Since then, we have been treated to a parade of superheroes. From Marvel to DC to superheroes invented to sell cars on local TV, we are a culture that loves the thought of being rescued by charming people with amazing powers. Some of us even dream of having a few superpowers of our own. The Amazing Invisible Mom, anyone?

While we had to wait an entire teenager for another Incredibles film to swoop into theaters, Incredibles 2 picks up, literally, where the first movie left off. Without missing a beat, we are reconnected with the Parr family about to take on Underminer. The battle to undermine Underminer showcases deft and creative fun animated action sequences that not only entertain but highlight the family’s strengths—and weaknesses.

Incredibles 2 is loyally consistent with the themes established in the first go-round. Identity and family dynamics are always in the forefront. How do you raise normal kids, go to work, provide, guide, soothe, and find your own way when you have to keep so many secrets? Worst of all, how do you sleep at night knowing you aren’t able to express your true self?

More importantly (and amusingly): How do you sleep at night when you have a baby with dozens of uncontrolled superpowers? You don’t.

Mr. Incredible (Craig T. Nelson) and Elastigirl (Holly Hunter) find themselves switching their roles. She goes off to work for the wealthy Deavor siblings, Winston (Bob Odenkirk) and Evelyn (Catherine Keener). They promise to use their connections and technology to make it legal for Supers to wield their powers in public again. Meanwhile, Mr. Incredible/Bob stays home to grapple with the wildly varying needs of their three kids. He stumbles and fumbles everything from dealing with Violet’s broken heart to Dash’s schoolwork to the highly challenging and very surprising development of Jack-Jack’s deep set of skills.

He also (very humanly) struggles with jealousy as Elastigirl/Helen uncovers a truly creepy villainous plot and gains worldwide fame. But can she fight this battle on her own?

Incredibles 2 honors the first film by deftly switching focus between action-packed battle scenes, laugh out loud comedy, and quieter, introspective moments. Brad Bird, who wrote and directed both films, retains the spirit of the first movie while taking this new offering to higher heights. It’s a movie aimed at children and families, but it’s also thoughtfully stocked with things for adults to ponder while emptying a large bucket of popcorn.

Incredibles 2 is slick, stylish fun with intelligence and heart.

Incredibles 2 is a Disney/Pixar film. It is rated PG and opens officially on June 15, 2018.