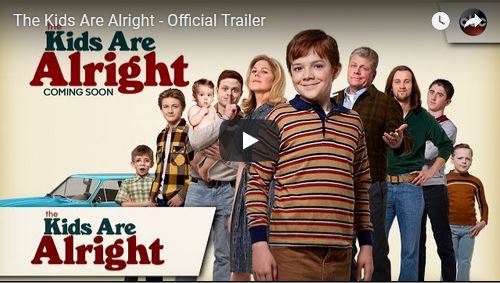 New Series “Single Parents” and “The Kids Are Alright”

Is the summer television series drought getting you down?

Here’s something to look forward to! ABC has released some of the trailers for its new comedies and dramas as part of the 2018-19 series orders. I can’t tell you how thrilled I am some of them are family-centric comedies that look like they’ll be hits! Here are a couple of my favorites.

The Kids Are Alright — Comedy
Produced by ABC Studios. Set in the 1970s, this ensemble comedy follows a traditional Irish-Catholic family, the Clearys, as they navigate big and small changes during one of America’s most turbulent decades. In a working-class neighborhood outside Los Angeles, Mike and Peggy raise eight boisterous boys who live out their days with little supervision. The household is turned upside down when oldest son Lawrence returns home and announces he’s quitting the seminary to go off and “save the world.” Times are changing and this family will never be the same. There are 10 people, three bedrooms, one bathroom and everyone in it for themselves. The series is inspired by the childhood of writer/executive producer Tim Doyle.

Single Parents — Comedy
Produced by 20th Century Fox Television and ABC Studios. A group of dysfunctional single parents lean on each other as they raise their kids, look for love, and ultimately realize survival is only possible with the help of each other. This ensemble comedy follows a group of single parents as they lean on each other to help raise their 7-year-old kids and maintain some kind of personal lives outside of parenthood. The series begins when the group meets Will, a 30-something guy who’s been so focused on raising his daughter that he’s lost sight of who he is as a man. When the other single parents see just how far down the rabbit hole of PTA, parenting and princesses Will has gone, they band together to get him out in the dating world and make him realize that being a great parent doesn’t mean sacrificing everything about your own identity.