Rebecca Lukens: The Mom with a Will of Iron

If you’re looking for a unique Mother’s Day gift for the favorite mom in your life, look no further than Tough Mothers!  In concise, deeply researched vignettes, accompanied by charming illustrations,  the author of Rejected Princesses illuminates these fearsome women, explores their lives, and pays tribute to their accomplishments. A celebration of motherhood and female achievement, Tough Mothers reminds us of the power of women to transform our lives and our world.

In June, her husband suddenly died from fever, joining her father and two of her children, who’d died in the previous year. On his deathbed, her husband made Rebecca promise to continue running the family business, an iron working plant…which was heavily in debt and had a massive order to finish. Rebecca’s mother, Martha, was so dead set against Rebecca running the plant, she began trying to repossess it.

And Rebecca was pregnant. With her sixth child.

In that situation, what’s a woman to do? Well, if you’re Rebecca Lukens, you start kicking butt.

Born Rebecca Webb Pennock, the future Mrs. Lukens was from a well-to-do Quaker family in Pennsylvania. She had a pretty sweet childhood: riding horses, getting an education, and even enjoying a fairytale romance. She and her husband fell for each other hard (he proposed on the second date—bold move!). Her husband integrated himself into the family quickly, going into business with Rebecca’s father. The newlywed couple leased the old Brandywine Iron Works factory from Rebecca’s father and began rebuilding it to get in on the manufacturing boom. It was hard work and a lot of it, but they were happy.

Then, in her words, “in summer of 1825, I lost my dear and excellent husband, and I commenced my hard and weary struggle with life.”

Challenge number one was keeping the employees. According to family lore, many of the workers were packing their things and ready to leave for good when she ran out the door and called them back, one by one. As Rebecca’s granddaughter later put it, Rebecca took some time to brush up on her multiplication tables, and then formally took the reins.[1]

Rebecca not only got the business back on track, she made it boom. Her task was to complete the massive order they’d just undertaken: plates for the Codorus, the first iron-hulled ship in the United States. Over the next 22 years, she established Brandyworks iron as some of the highest quality on the market. When one of their suppliers provided inferior product, she was unafraid to bring them to court. She was not about to let someone walk all over her.

She overcame endless difficulties throughout all this. A financial crisis in 1837 wiped out several iron working plants—but not Rebecca’s. Realizing the massive financial instability afoot, she temporarily shut down the plant and put her employees to work upgrading the facilities. When they ran out of work to do, she put them to work on her estate. Not only did her plant survive, she even retained her workers.

But by far the biggest thorn in her side was her mother, Martha. Feeling that a woman running a business was unfeminine, Martha did everything in her power to screw Rebecca over. Martha kept trying to give the plant to Rebecca’s brothers—despite Rebecca having rebuilt it herself, and having paid her late father money for the privilege. But due to her father’s will being poorly worded and her late husband’s will being nonexistent, Rebecca had to fight her mother in court over the deed for 20 years—and when Martha died, Rebecca had to continue fighting her own brothers.

In the end, Rebecca was victorious, but she had to pay for the property two or three times over. 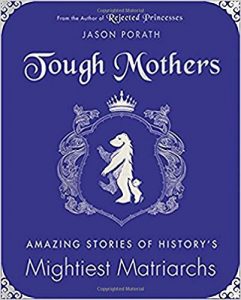 Rebecca’s true strength in all of this was realizing she could not go it alone and reaching out for help. She folded her family life into her professional one—she brought on her brother-in-law to help manage the plant and her daughter to serve as bookkeeper. Additionally, Rebecca relied on the religious community of Quakers for support, and continually referred to the religion’s Rules of Discipline to conduct business in a moral manner.

After Rebecca spent 22 years hard at work, her health began to decline, and in 1847, she withdrew from running the business. By the end of her life, she’d accumulated over $100,000 in personal property, a far cry from the $15,000 of debt she’d started with. She carefully earmarked much of it for her children—she was intent on not making the same mistakes with her will as had her late father and husband.

After her death, the Brandywine Iron Works was renamed the Lukens Iron Works and later Lukens Steel in her honor. It was a Fortune 500 company for quite some time and was managed for 125 years by her descendants. In 1994, Fortune magazine recognized Rebecca as America’s first female industrialist leader and inducted her into the American National Business Hall of Fame.

Much of the vibrance of Rebecca’s story is due to her being able to tell it in her own words. Her diary, found some 150 years after her death, reveals the personal struggles of a woman trying to move on from tragedy. Of the early days after her husband’s death, she wrote: “With some fear, but more courage, I began to struggle for a livelihood. I think at this period I must have possessed some energy of character, for now I look back and wonder at my daring. I had such strong, such powerful incentives for exertion that I felt I must succeed.”

This is a decently accurate representation of the Brandywine Iron Works. Thankfully, a depiction of it on a bank note survives to current day and serves as excellent reference. The furnace embers are a bit of artistic license. Of course the iron workers would not want embers floating around a wooden building, but they added a bit of wonder to the composition.

[1]          Neither of these anecdotes are historically confirmed, and are likely a bit of hyperbole, but come on. Just go with it.