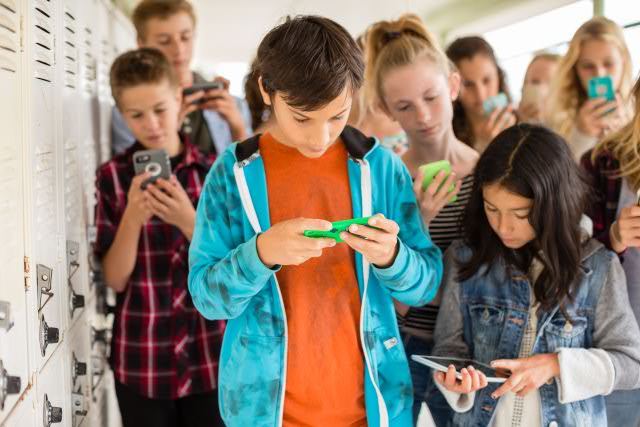 “…the initial setup menu could be expanded so that, just as users choose a language and time zone, parents can enter the age of the user and be given age-appropriate setup options based on the best available research including limiting screen time, restricting use to certain hours, reducing the available number of social media sites…”

For several years I have been saying to parents and educators that it shocks me that we don’t have phones that are set up this way. I have also spoken about how hard it is to get individualized data plans within family plans that put different data limits on each person’s device. Limiting a youth’s data plan would help them better manage their screen time as well as to be more in the moment when they are without WiFi.

It is great to see a stronger call for companies to have more social responsibility. In the meantime what can we do? One thing that is key is to find ways to help youth gain insight into the sheer amount of time they spend with entertainment on screens, i.e., YouTube, video games, social media, etc.  Studies show people significantly underestimate the amount of time they spend on screens. The first step to changing behavior is to get data on it. Some third-party apps and devices can help with this.

Recently my 16-year old daughter Tessa said she felt like she was on her phone more lately so I talked to her about how getting data into her actual usage could be useful. I proposed that for one week we use an app that paired our phones and would record her time on apps like Snapchat and Instagram. The tool we’re using does not let me see her content (which is fine because that was not my goal). Tessa was hesitant because she knows that I want her to be on her phone less and she worried that data would be used as ammunition against her.  I assured her that my goal is for her to get insight that would help her make her own decisions about time use. After one week I’ll have Tessa guess how much time she thinks she used over the 7 days. From there I am sure we will have some good conversations about her reactions and her ideas for balancing tech with everything else in her life.

** But I have to say, not saying anything is super hard for me–but it will make the information much better if I keep my mouth shut. Of course, she still has rules like turning her phone in at 9:00 pm during the week. (My motto is sleep is supreme.)

Here are some questions for this week’s Tech Talk Tuesday to open a dialogue:

For more discussion ideas, you can peruse past Tech Talk Tuesdays. If you are interested in seeing Screenagers, you can find event listings on our site and find out how to host a screening.