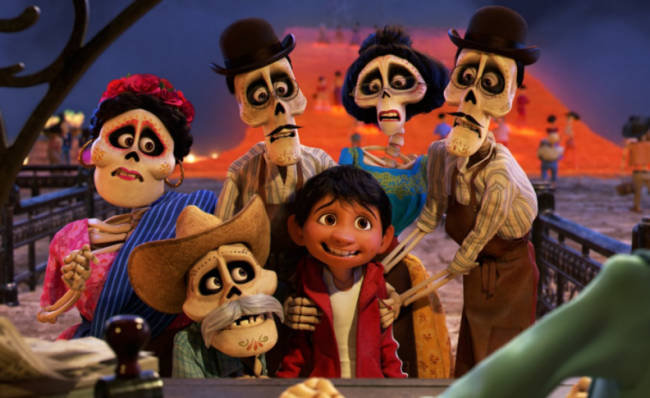 Coco is a beautifully decorated cake. On the surface, it’s coated with sweet buttercream and dotted with sprinkles and roses in every color of the rainbow. From the opening moments, Coco draws you in with laughs, detail, and striking animation. It looks good! Let’s take a piece.

Ooh, there are about 18 layers in this cake. Time to dive in!

Miguel (Anthony Gonzalez) is a boy living in a small Mexican town. Everyone is in a flurry preparing for Dios de los Muertos, the Day of the Dead. His family are the local shoemakers, going back several generations. He lives with his loving extended family and it is very understood he will learn to make shoes. The problem: He loves music. He sings and plays the guitar well. Most families would be proud and supportive, but not his.

While his home showcases a shrine to his dead relatives, Miguel has a secret shrine to his musical and movie superstar hero, Ernesto de la Cruz (Benjamin Bratt), the most famous person to hail from his hometown. When Miguel learns the Day of the Dead commemoration includes a talent show, he decides nothing will stop him from entering the contest—even feisty Abuelita (Renee Victor). When that dream is threatened, Miguel goes to extreme lengths to enter the talent show. In the process of risking everything, he makes a startling discovery that could explain why music is sewn into his soul.

That shocking moment lands him, still very much alive, in the Land of the Dead. Suddenly, there’s a person to find and a mystery to solve.

This is where the Pixar animation goes from stunning to breathtakingly stunning. Detail and color are almost overwhelming. The Land of the Dead sequence is one of the finest examples of animation I’ve ever seen.

Miguel quickly encounters his dead relatives, in skeletal form, as they cross the bridge to the Land of the Living for the annual cross-mortal visit. The clock is ticking, though, so if Miguel doesn’t find who he’s looking for in time, he will be stuck in the Land of the Dead forever. He reluctantly accepts the help of ernest Hector (Gael Garcia Bernal).

That cake keeps getting better, layer after layer. Animation, humor, music are all great, but the heart of the movie is found in family and the power of memory. Coco is an unusual movie in that it isn’t afraid to explore pain and regret, or ugly emotions like jealousy and hate. In the end, forgiveness and redemption save the day. Like Pixar’s Up, Coco is not afraid to get the tears flowing but then turn around and make you laugh.

Coco, by Pixar Animation Studios, released by Disney, opens on November 22, 2017. It is rated PG.