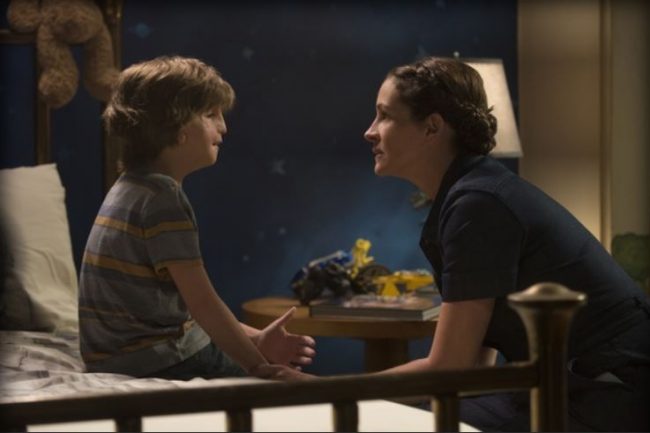 One of the most beloved best selling fiction books in the past five years is Wonder, by R. J. Palacio. Chances are you or your kids have read the story of amazing Auggie Pullman, a 10-year-old boy born with severe facial deformities. While not a true story, it is timely and rings true. Readers embraced the story of Auggie’s journey. He was sheltered by his well-meaning but fiercely loving family. With their help, he ventures out into a wider world where acceptance and friendship are made harder by prejudice and fear.

It’s no surprise Wonder found its way into movie theaters. With an all-star cast, including Julia Roberts and Owen Wilson as Isabel and Nate Pullman, hopes are sky-high that the film version captures the spirit, humor, and heart of this very special story.

Jacob Trembly is a talented young actor you might remember from Room. He takes on the heavy, emotional role of Auggie with courage and warmth. His talent shines through layers of makeup and facial prosthetics, which is a huge feat. The makeup doesn’t wear him. He’s utterly believable. 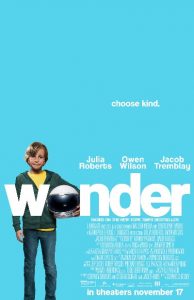 Roberts exudes the fierce love of a mom with ease and grace. She truly shines in the role of Isabel and was a pleasure to watch. As a mom, I could easily identify with her heartache over her son’s pain but also the soaring joy over watching him overcome. Roberts is a treasure in this film. Owen Wilson as dad Nate captures the depth of a man who keeps everyone afloat with his optimism and humor, but he too is vulnerable.

Via, Auggie’s sister, is capably portrayed by Izabela Vidovic. Her complicated emotions add another layer to Wonder in an important way. In the novel, chapters revolve around the viewpoints of different characters, some major, some minor, but all lending insight into Auggie’s journey and their own. The movie version is divided in a similar way. We see Auggie through Via’s friend, Miranda (Danielle Rose Russell). We see into the heart of sweet Jack Will (Noah Jupe). These viewpoints build upon each other.

Wonder aptly captures the raw emotions of letting go, heightened by very real fears for Auggie’s well-being. Kids can be cruel, but where does that cruelty start? Can kids (and adults) learn to overcome prejudices based solely on appearance?

There are a lot of laughs and sweet moments sprinkled throughout the film. Be prepared with some tissues, though, because tears will flow. Let them come. It’s the season to celebrate the love of family and friends and to look beyond surface appearances.

Is it important to read the book before you see the movie? Do your kids need to read it first? No. Wonder, as a movie, stands on its own merits and strengths. I predict the book will be in your future, and that’s a good thing. Movies can’t do it all, but Wonder comes close. Wonder is rated PG. It opens everywhere on Friday, November 17th, 2017.