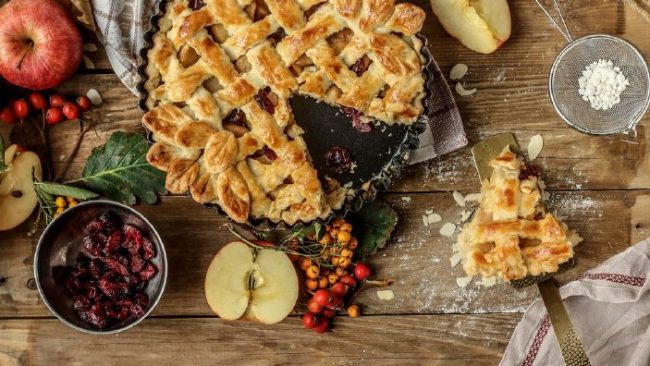 Next to over (or under) cooking the turkey, a succulent pie is the top of my Thanksgiving stressers (particularly since I’m a crust snob and nothing short of flaky will do). However, making pie crust can be so overwhelming so I was thrilled to find this “Pie School” tutorial from Studio 5 on how to make the perfect pie crust.

Fold with fork until flour is absorbed and dough comes together. Flour surface and rolling pin well. Flatten dough gently with hand to make round shape. Roll out from center to about 1/8” thickness. Fold in half, lift onto pie plate. Open and shape to pan.

Tips:
-Dough may be easier to handle if chilled for an hour or so.
-Try rolling the dough around the rolling pin and then unrolling right onto the plate.
-Try ½ regular and ½ butter flavor Crisco.
-Some people like to “cut” the flour in with their fingers.
-Don’t cut the flour and shortening too much, the pieces of shortening are what make the crust flaky, you want to have pebble size pieces of dough before adding the water.
-If your pie is getting too brown on the edges, but not on top, take a piece of foil, fold in half to make a square then cut a half circle out of the middle. Unfold and put over your pie.
-Brush beaten egg white over your pie dough before filling with pumpkin to avoid soggy bottom crust.
-If baking for a single cooked crust, prick the entire bottom crust with a fork (to allow steam to escape). Set the oven to 500 and bake for about 6-10 minutes on the middle rack, watching carefully to insure the crust doesn’t burn. Remove the crust when done and let cool, then fill with custard or other filling. This is for a single cooked crust only. Do not prick the bottom of the crust when baking a filled single crust pie (such as pumpkin or pecan).