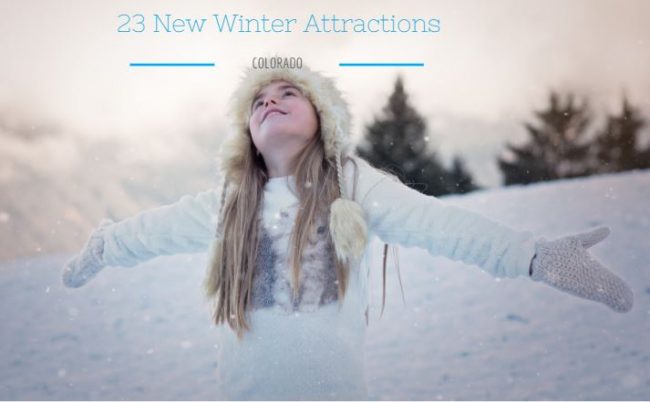 Colorado is heading into a winter filled with new offerings for visitors. From soaring down the mountain year-round on four new mountain coasters, skiing 468 acres of new terrain at Arapahoe Basin and celebrating Snowmass’ 50th anniversary, to exciting hotel and restaurant openings and unique packages and experiences, Colorado is filled with winter fun just waiting to be explored. Following is a sampling of what’s new for the winter season in Colorado. For more information on Colorado, visit www.COLORADO.com.

Colorado Welcomes Winter Olympic Experiences: Colorado welcomes the 2018 PyeongChang Olympics with several Olympic experiences. Attend ski and snowboard Olympic qualifiers at the Dew Tour in Breckenridge (December 14-17, 2017) and the Toyota U.S. Grand Prix at Copper Mountain (December 6-10, 2017) and Aspen(January 10-14, 2018), visit the Olympic Training Center in Colorado Springs, train where Olympians train at Woodward at Copper, experience Steamboat’s 2018 Olympic Send-Off Celebration (January 27, 2018) and more.
The Brown Palace’s 125th Anniversary Champagne Cascade, November 19, 2017: Denver’s elegant welcome to the holiday season with a master swordsman who uses a Napoleonic saber to sever the bottlenecks of Moet & Chandon Champagne bottles at the historic Brown Palace Hotel. The Champagne is then poured into the uppermost glass of a two-story, 6,000-glass pyramid, overflowing to the glasses below, creating a dazzling display. The 2017 Cascade will honor the hotel’s 125th anniversary.
Snowmass Ski Area Celebrates 50 Years: This winter season marks the 50th anniversary of the Snowmass Ski Area. The season-long celebration includes vintage, 1967 lift ticket pricing of $6.50 on Friday, December 15 as well as a festive weekend of anniversary activities December 15-17 such as a retro party at Elk Camp restaurant, fireworks display, the return of Banana Days, an on-mountain celebration at Spider Sabich Picnic arena and more. Additionally, throughout the season, the celebration continues with new gold signs that mark the original ski trails, monthly fireworks display over Fanny Hill, a new mural in Base Village commemorating the history of Snowmass and more.
New Kidtopia Signature Event Series at Keystone Resort: New for 2017-18, the Kidtopia Signature Event Series will feature three distinct events throughout the winter to complement the family experience at Keystone. Events include the Kidtopia Spectacular, a holiday mountaintop celebration from December 15-24; the first-ever Kidtopia Culinary Festival, a celebrity chef event catering to the youngest of foodies from February 9-17; and the Kidtopia Music Experience, rock’n’roll parties, dance parties and more to kick off spring skiing from March 2-10.
Cooper Celebrates 75th Anniversary, December 31, 2017: Cooper, a gem resort just outside of Leadville, the highest incorporated city in the U.S., turns 75 this year. In honor of the anniversary, Cooper will hold a 75th birthday party and New Year’s Eve celebration with cake, balloons, a torchlight parade and more.
Loveland Launches Winter Wonderlights, November 25, 2017 – January 14, 2018: The magic of the holidays can be found at Loveland’s Winter Wonderlights, a new walkable holiday lighting attraction situated in the award-winning Chapungu Sculpture Park at Centerra. From November 25 until January 14, guests will be mesmerized as they stroll through the north end of the Sculpture Park. Holiday string lights, twinkling bulbs, lit trees, holiday characters and illuminated African stone sculptures only found in Loveland will transform a special section of this 26-acre outdoor park into a winter wonderland.
Outdoor Retailer Makes the Big Move to Denver, January 25 – 28, 2018: Denver recently announced the city was selected to host the prestigious Outdoor Retailer trade shows for the next five years, which represents a dawning for a galvanized, energized recreation community that will grow from Colorado, fomenting support for public lands, environmental health and the outdoor recreation industry. The first winter market show will take place in conjunction with the Snow Show.
2018 Olympic Send-Off Celebration in Steamboat, January 27, 2018: Steamboat is known for having produced more winter Olympians than any other town in the United States. The community celebrates that heritage and prepares to root for the next generation of Olympic athletes at the 2018 Olympic Send-off Celebration. Almost 90 athletes with ties to Steamboat have competed in the winter games and many of these former athletes will gather with 2018 team hopefuls during an evening with athlete autographs, fireworks, interviews and more.
Degas: A Passion for Perfection, February 11 – May 20, 2018: Appearing for the only time in the United States at Denver Art Museum, Degas: A Passion for Perfection will showcase prolific French artist Edgar Degas’ works from 1855 to 1906. More than 100 works consisting of paintings, drawings, pastels, etchings, monotypes, and sculptures in bronze will be on view. The exhibition will focus on the most prominent and recurring themes throughout Degas’ 60-year career. These include his interest in learning from the art of the past and from that of his contemporaries, a lifelong fascination with the nude, a passion for horses, and his strong interest in opera and dance.

Arapahoe Basin Expands Terrain: For the 2017-18 season, Arapahoe Basin will be adding a total of 468 acres to its inbounds skiable terrain, bringing its total acreage to over 1,400 acres. The expansion is one of the only expansions taking place in North America. Construction on the new terrain began this summer, with patrolled and maintained hike-back skiing available starting in the 2017-18 season. There will be 339 acres of lift-served skiing in The Beavers, including intermediate and advanced open bowl and tree skiing. The Steep Gullies will remain hike-back terrain, and will be some of the most technical and challenging in-bounds terrain at Arapahoe Basin.
Colorado Welcomes Three New Creative Districts: Colorado Creative Industries recently announced the certification of three new Creative Districts into the Colorado Creative Districts Program. The newly certified districts are Manitou Springs Creative District, Steamboat Springs Creative District and Westwood Creative District (Denver) joining the existing 18 Colorado Creative Districts.
Colorado Field Guide Launches: The Colorado Tourism Office (CTO) introduced a new initiative aimed at inspiring travelers to explore the state’s hidden gems and carry their dollars to less-visited destinations in the state. The itineraries, which include specific recommendations for things to do and places to eat and stay, are housed on Colorado.com in a brand-new trip planner built from the ground up for Colorado by Utrip, an artificial-intelligence-based destination discovery and planning platform.
Copper Mountain Opens The Rocky Mountain Coaster: This fall, Copper Mountain opened its new alpine coaster that will span 5,800 feet. With a vertical drop of 430 feet on an average grade of 10.9 percent, the Rocky Mountain Coaster will provide an exciting activity in both the summer and winter months.
Cross Country Ski Association Offers Punch Pass: Cross country ski across 13 Colorado resorts with the Cross Country Ski Association (CCCA) Punch Pass. The CCCSA punch pass is similar to having a season pass, but instead of just one resort, ski across several resorts throughout the state. The pass includes 12 trail passes at six resorts and great lodging, rentals and tour discounts at the other seven resorts.
Ouray Hot Springs Pool Unveils $10.6 Million Renovation: Ouray Hot Springs has undergone a $10.6 million renovation and recently unveiled the finished product in time for the springs’ 90th birthday. One of the many goals of this project was to make the hot springs more accessible, secluded and inclusive for all visitors, while maintaining the pool’s historic oval shape. New additions joined the two soaking pools, which opened in May as the first leg of the renovation. Other add-ons and improvements include new shallow and hot sections, an overlook, activity pool, slides, lighting and more.
Powderhorn Mountain Resort’s New Ski Patrol Ski Along: Get the ultimate insider’s guide to Powderhorn with the new Ski Patrol Ski Along. Ski with a professional Ski Patroller and learn some of the tools of the trade such as safety, transporting and caring for guests on the mountain. The ski along is open to all ages and starts at $75 per person.
Purgatory Resort Opens New Mountain Coaster: Opening in late 2017, Purgatory Resort in Durango will feature a new mountain coaster that will be accessible right from the base area and will operate during both winter and summer seasons. The coaster will be 4,000 feet in length with a 300-foot-vertical, and will feature nine switchbacks and one loop, giving guests another fun activity snow or shine.
Snowmass Opens New Breathtaker Mountain Coaster: With a target opening of December 2017, the Breathtaker Coaster will feature a 5,700-foot-long track with a total ride time of seven to nine minutes. The coaster will span 410 vertical feet with the speed controlled by the rider, but there will be anti-collision technology for safety and a tandem option for small children.  The Breathtaker will be open for both summer and winter operations in which the coaster will wind through the trees between Gunner’s View and Sandy Park ski trails on Snowmass Mountain.
Steamboat Ski Resort Debuts Outlaw Mountain Coaster:  Steamboat’s new Outlaw Mountain Coaster descends more than 400 vertical feet with a riding length of more than 6,000 linear feet, making it the longest mountain coaster in North America. The track will be in the vicinity of Christie Peak Express lift and rise between 4 and 40 feet above the ground with dips, waves, turns and 360-degree circles.
New Intro to Alpine Touring Program at YMCA Snow Mountain Ranch: This new ski program is geared toward those who want to learn the basic skills needed to have a great day touring the backcountry.  The tour focuses on how to use modern Alpine Touring equipment, and touches upon the basic principles of how to use an avalanche beacon, shovel and probe.  This program is perfect for those who have always wanted to see what it’s like to ski on their own outside of the resort.
Zen Compound Expands into Denver Market with Groundbreaking Facility: This fall, San Francisco artist-deejay-entrepreneur Paul Hemming will open his second Zen Compound, a groundbreaking facility that divides four distinct but related concepts into a single space: ECO-SYSTM, a co-working space for artists and musicians; Mirus, a gallery hanging pieces from locals as well as internationally-known artists; Hive, a unique coffee bar; and Temple Nightclub, an innovative club known for its programming, production feats and legendary hospitality.

Winter Park Express Train Expands Service: The Winter Park Express, which reopened in January 2017, will expand service to select “First Fridays” of every month. In 2018, the train will run every weekend from January 5 to March 25 with additional Friday service on January 5, February 2, and March 2- 27 total days, which is four more days than last season. Ticket prices have been lowered to $29 one way on select departures.