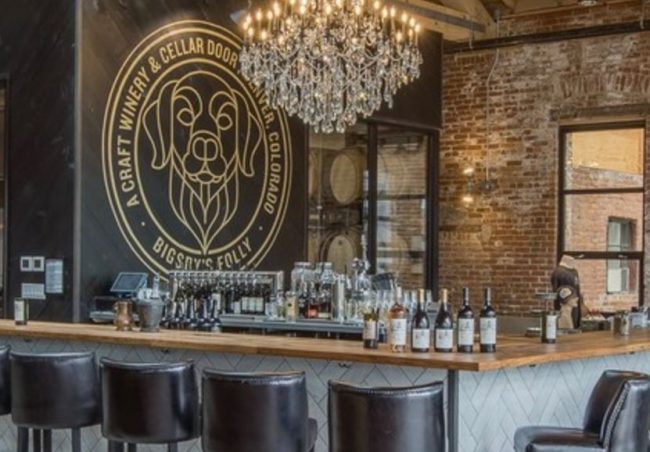 Desperately need a date night? Grab your sweetie or your girlfriends and check-out these fabulous new offerings in Denver!
Bigsby’s Folly, Denver’s New Craft Winery: Opened this summer, Bigsby’s Folly is a new craft winery where artisanal meets accessible at the full-production urban winery. The winemakers pair the authenticity of California’s most prestigious vineyards with the approachability of the Roaring 20s-inspired tasting room with a restaurant and full bar menu. The winery offers a “Winemaker for a Day” experience where visitors can blend their own red wine.
Brian Dayton Opens Corrida in Boulder: This Fall, Bryan Dayton, co-owner and beverage director of OAK at fourteenth, Acorn and Brider, will open Corrida on the rooftop level of downtown Boulder’s PearlWest building – a coveted space that offers one of the only unobstructed views of the Flatiron mountains within the city. “Corrida,” a term that loosely translates to “bullfight,” serves as a nod to the restaurant’s Spanish roots. The menu will be largely inspired by northern Spain’s Basque Country and its rich culinary heritage – focusing primarily on the great steak restaurants found throughout the region.
Ginger and Baker Opens in Fort Collins:  Ginger and Baker is coming to the former Northern Colorado Feeders Supply in Fort Collins. Slated to open in September, the charming spot includes a pie shop and restaurant, cooking school and market.
Ski Cooper’s Moonlight Mountaintop Yurt Dinners: In 2018, Ski Cooper will introduce Moonlight Mountaintop Yurt Dinners. Guests will be shuttled in a warm snowcat up the mountain to a gourmet feast. Dinner will be served in Ski Cooper’s new yurt at the top of the ski lifts, which opened last season for on-mountain snacks and drinks. The yurt evenings will end with a warm snowcat return to the lodge at the base of the mountain. These dinners will be offered on the first Saturday of the month from January through April.
Top Chef Hosea Rosenberg Opens Santo in Boulder: Award-winning Chef Hosea Rosenberg will open his second restaurant concept this fall in Boulder. Just under three years after opening his flagship restaurant, the critically acclaimed Blackbelly, Rosenberg will dig into his roots for inspiration with his next creation: Santo, a full-service restaurant serving seasonal, modern, northern New Mexican fare. A native of Taos, NM, Chef Hosea will bring to life the vibrant eating and drinking culture of the region with authenticity.
Solutions Lounge & Restaurant Features Escapology® Denver: Set to open in early October, Solutions Lounge & Restaurant is the first and only escape room that also includes a bar and full restaurant. This 6,100-square-foot multi-faceted event space will feature seven escape rooms along with the restaurant that will have largely cheese-centric cuisine.
Jennifer Jasinski’s Ultreia Opens in Denver’s Union Station: James Beard Best Chef Southwest Jennifer Jasinski, along with partners Beth Gruitch and Jorel Pierce will open Jasinski’s second restaurant in Denver’s Historic Union Station, Ultreia, this fall. The restaurant will open in the building’s Great Hall and will offer shared plate pinxtos and tapas from the countries of Spain and Portugal.
Zeppelin Station Opens in Denver: Opening in December 2017, the 100,000-square-foot Zeppelin Station will boast a ground level market hall featuring retail tenants focused in design goods, various street food vendors from around the country, multiple bars and a full-service anchor restaurant. Currently on the roster for the food hall are Denver’s Vinh Xuong Bakery, Boulder’s Fior Gelato, and Chicago’s Aloha Poke Co, with several announcements coming soon. Additionally, the RiNo Arts District will house their headquarters at Zeppelin Station alongside a dynamic retail space showcasing local artisans.
For more great dining suggestions, be sure to go to Colorado.com.