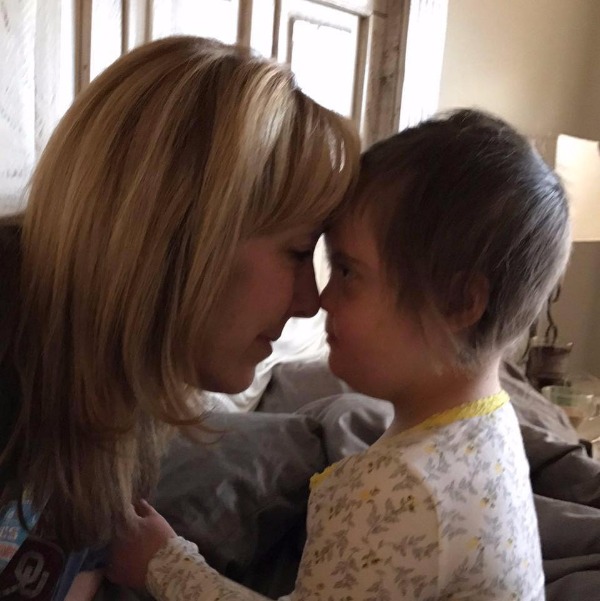 Each day, 42 families in the United States will receive the devastating news that their child or teen has cancer. A couple years ago, I could not have told you anything about it. I can now tell you that September is Childhood Cancer awareness month and that an orange ribbon signifies cancer awareness – like red signifies AIDS or pink signifies breast cancer.
How did I find this out? Two years ago now, my friend and colleague informed everyone that her precious daughter, Carina, had Leukemia (cancer of the body’s blood-forming tissues, including the bone marrow and the lymphatic system). To further complicate matters, Carina also has Down syndrome so her diagnosis was more complicated. I sat down with Carina’s mom Stacie and asked her a few questions.
Gretchen: Carina already has Down syndrome, but can you tell me specifically about how you found out that Carina had cancer?
Stacie: She was having severe leg, arm and chest pain. She was crying so loud and sweating. I took her to five or six different emergency rooms or doctors and they all told me that it was not cancer. There was even one that said, “we don’t see anything wrong with her” but he gave her morphine. I said, “there must be something wrong with her if you think she needs morphine. We’re not leaving this hospital until we figure out what is wrong with her.” One doctor said, “you are wasting my time and taking my room.”
I had another friend who has a child with Down syndrome and cancer and symptoms were so similar. I went into FBI research mode and just pushed and pushed to get her in. Because of her Down syndrome, she doesn’t present like normal kids. I knew this. Parents are our children’s best advocate. We have to be.
Her pain was mainly in the long bone on the left side but n nothing was showing up in her blood. After we took a CBC test (Complete Blood Count) the doctor said, “I’m glad to tell you this is not leukemia  but it is odd. Don’t worry, I will help you and we will get to the bottom of it.”
Gretchen: What is one of the best things that someone did for you? (How could a person support you)?
Stacie: It was tricky since we spent over a month in the hospital at the beginning of treatment and then treatment was a 2 ½ year process.  So many people did so many nice things.  Due to Carina being immunocompromised from chemo, we were restricted with seeing a lot of people. And the people had to have had their flu shots. I had several friends come and sit with me initially. This was nice to have support and get out of the hospital room a little.
Gretchen:  What was the worst?
Stacie: The people who would tell me that God only gives us what we can handle started to bug me.  Not because I don’t believe in God, but because we have been through so much and I don’t think God causes it nor do I think I am special to handle more.
Gretchen: What was a surprising thing you learned in the whole process?
Stacie: I became a cancer/medical expert to keep my daughter alive.  I never wanted to be in the medical field!
Gretchen: Was it worse on you or on Carina?
Stacie: We had one nurse that did our cancer “release from the hospital” class.  She was absolutely horrible and mean.  She basically told me to plan for a funeral during the class.  I will never forget her…she should have been giving hope along with suggestions to keep Carina safe.  This was the most horrible experience I have ever had.
Gretchen: What is something you feel like anyone can do to help you and/or someone they may know with childhood cancer – or the research efforts?
Stacie: We need to get more of the funding to the kids.  Right now, kids are only receiving 4 percent of the total funding while the rest goes to adults.  The kids are the future and they need more funding.
Thank you so much for your time chatting. Thank goodness Carina has finished her two year cancer treatment and is still the smiley girl she has always been.

How You Can Help

Amazon Smile: Get your shopping done while supporting childhood cancer research. Amazon donates 0.5 percent of the price of your eligible AmazonSmile purchases to the charitable organization of your choice. Support CCRF!
Kneaders is proud to be part of the pioneering research  of Dr. Joshua Schiffman at Huntsman Cancer Institute, his research on elephant DNA might hold the key to ending childhood cancer. They Knead your help in this effort. All month long Kneaders will sell elephant-themed items including a delicious cookie where proceeds benefit childhood cancer research. A little hope can have a big impact. For more information go to kneaders.com/hope.
American Childhood Cancer Organization (ACCO) is the largest and oldest grassroots childhood cancer organization in the United States, and the only member of Childhood Cancer International. Find out how you can donate directly.