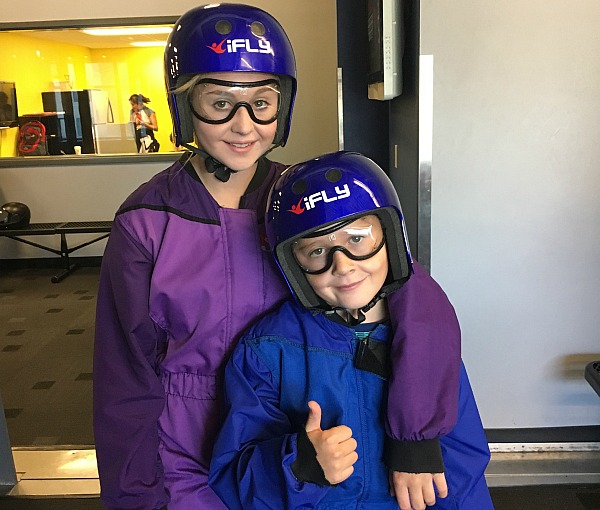 Have you ever wanted to fly? My kids and I were supposed to take flight at iFly Denver earlier this summer but when my daughter unexpectedly broke her arm on a giant floating marshmallow (you can’t make this stuff up), we were grounded. Literally.

Thankfully, time heals most wounds and we were thrilled to check out this high-flying adventure the week before we went back to school. Skydiving has always been on my bucket list but as I’ve grown older, that bucket has been filled with holes and I’m not the adrenaline-junkie of my youth.

iFLY indoor skydiving is the perfect way to experience the freedom of flight without jumping from a plane. This indoor flight facility in Lone Tree offers the simulation of true freefall conditions in a vertical wind tunnel, with room for parties, meetings and even lessons.

What you should know

Upon checking in, we went through a brief training session where we were tutored on two important things: 1) Keep your chin up and 2) Hold still, which is no small feat in a flight chamber with up to 150 mph winds. We learned four hand signals our instructor would be using to communicate and got outfitted in our flight suit, goggles, helmet and earplugs.

Prior to our session, we watched experienced indoor skydivers flip, twist and spin and I was excited to make my own attempts…until I realized as a rookie, my challenge was just to learn to simply fly on the wall-to-wall cushion of air. Our group entered our “wind tunnel” waiting area and one-by-one, we were given a 1-minute turn in the flight chamber. As I stood at the open door to the flight chamber, I suddenly felt anxious but my fears were assuaged when my instructor motioned for me to lean forward…and I was immediately flying as he closely monitored my every move.

A traditional freefall out of a plane lasts anywhere from 45-60 seconds and we had that amount of time to make our own attempt. Initially, I felt like a failed superhero as my arms and legs flailed in the wind but I quickly remembered to keep my chin up and relax…and I was able to fly on my own. It was one of the most exhilarating feelings in the world to give up control and just trust the wind.

For our second attempt, our instructor had a surprise for us–the first 30 seconds we flew on our own but for the second half, he grabbed onto us and we soared up, down and around the chamber with giant sweeping motions. I felt like a bird in flight dive-bombing for my food and just as we were about the hit the bottom net, we effortlessly soared to new heights again. 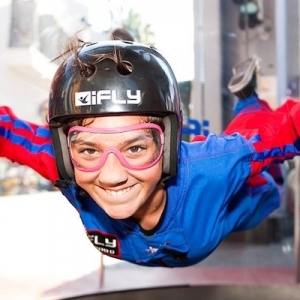 My kids had very different experiences. From the moment my 13-year-old daughter entered the chamber, she felt empowered and electrified as she quickly learned to surf the wind. Eleven-year-old Bode, traditionally more cautious, struggled to fly on his own and the instructor was constantly tweaking his position (which happened with most of the younger kids).  He was fighting off tears as he waited for his second session and he divulged his frustration: he couldn’t understand what his instructor was telling him to do. I advised him to just relax and let the wind do all the work. On his second attempt, he did much better and finally caught a glimpse of what it felt like to soar.

Be sure to bring someone who can take pictures for you or buy the DVD of your experience for $15. Really, the only downside to our adventure is we did the introductory 2-flight package for $59.98, which sounds like enough until you realize each “flight” is only one minute long.

But rest assured, it was two minutes we’ll never forget.