I’ve been hiking in Colorado on weekends and summer vacations since I moved here 17 years ago, and for the most part, I ignored the state parks.

I was a summit hiker. The thrill, for me, was that top-of-the-world feeling, the 360-degree panorama, the lesser peaks fading toward the horizons like permanently frozen waves below my superior island.

Mount Elbert was tops, the tallest of Colorado’s 54 (or so) fourteeners. I reached the summit on my second try and shed tears when I realized that storm clouds, leg cramps and shortness of breath could not stop me. The summit was spectacular, but lessened that sunny day by a legion of other hikers, many on cellphones telling their friends, “Guess where I am!”

There are no fourteeners in Colorado’s 43 state parks. Many of their hiking trails are downright easy. Some are wheelchair accessible.

But as I have come to learn in my post-Elbert years, not every beautiful place in Colorado must be seen from a mountaintop, and the state parks are no exception.

Plus, I’ve grown a little older and a little slower, as everyone does. Nowadays, a walk around a lake no longer strikes me as boring. I’ve finally begun to discover some marvelous state parks within easy reach of Old Reliable, my 112,000-mile-old Ford Escort.

So I’m setting out on a new journey on foot. In the next year or so, I hope to visit all of Colorado’s state parks, take some photos and some good walks, and share what I see and hear.

(And by the way, there’s no shortage of huff-and-puff trails in these parks. For example, the newest state park, Staunton, features an 11-mile hike to Elk Falls Overlook and back, which the park estimates as a four- to five-hour trek. Mueller State Park, near Divide, offers 55 miles of remote hiking trails in terrain with an average elevation of 9,600 feet.)

Before delving into all 43 state parks, let’s take a look at five that are close to Denver and bursting with fall color. 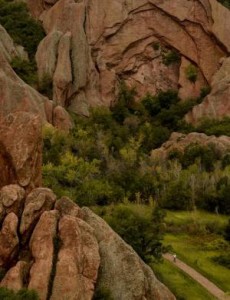 Roxborough belongs to the animals. It closes at sunset, shutting people out, and late-afternoon hikes can be so quiet that for the most part, I hear only my hiking boots crunching on the trail.

My all-time favorite trail in our state parks is the Carpenter Peak Trail, a 6.4-mile round-trip with great views of the Front Range peaks at the craggy summit. In the fall, you can see a splash of cottonwood yellow before sheer red sandstone walls, the reddish leaves of stunted oaks starting to turn, the asters still displaying purple glory — and wildlife. I have seen foxes, deer and eagles in this park, but no dogs. They’re forbidden here.

Though I was there for the foliage during my visit this fall, there’s no escaping the presence of wild animals. On the Carpenter Peak trail, a sign warns hikers to fight back if a mountain lion attacks. About 15 years ago, a visitor was mauled by a lion on this trail and lived to tell The Denver Post about it.

I’ve never seen a mountain lion in the wild. But when I returned to the Carpenter Peak trail last month, a woman at the visitor center warned me that a bear was out there. Parts of two other trails were closed for most of this season after a pair of golden eagles landed and produced twins.

Trail to check out: For a shorter and easier hike, take the 2.2-mile Fountain Valley loop. The left side winds past the bases of towering red spires that jut into the sky like mammoth dinosaur teeth. The right side leads to two stunning overlooks of the park’s range of sandstone spires. I prefer descending to the left, then walking uphill to the overlooks. Bring binoculars.

Another great fall foliage park to visit on foot: Golden Gate Canyon. It’s an appropriate name in October, when the aspen form a golden canopy over thin but well-marked trails destined for lakes and meadows. The trails to Dude’s Fishing Hole and Frazer Meadow are particularly good in October.

Golden Gate Canyon trails are well-signed and rated by difficulty. The park uses wild-animal tracks to identify each trail.

Trail to check out: For a strenuous hike from canyon to mountaintop, follow the Mountain Lion trail from Nott Creek, take a side trip on the hiker-only Burro trail to the Windy Peak summit, then return to the Mountain Lion trail and descend through aspen to an abandoned farm in Forgotten Valley and the trailhead. This route totals about 7.5 miles, so start early during autumn’s shorter days.

Then there’s Lory State Park, which survived two forest fires because someone had the foresight to thin a forest to a natural state before it was too late.

When I first visited the park west of Fort Collins after the 2012 North Fork fire, a stark line separated the black pile of ash left by a fire-suppressed forest and the recovering greenery in the mitigated zone. On that visit, 15 wild turkeys wandered fearlessly through a meadow in the trees, seemingly oblivious to a park ranger’s truck.

Lory, like Roxborough, is a remarkably quiet and beautiful place for an autumn stroll or hike. It also features trails for cyclists, but if you prefer a trail for hikers alone, go to Well Gulch, where I encountered no other humans on a weekday.

Trail to check out: For views of the burned ridgetops, take the Timber Trail up to the hiker-only Arthur’s Rock Trail, a moderately difficult 6-mile hike, plus a road mile back to your car. You can shorten this hike by descending at the Well Gulch trail intersection.

Closer to Denver, suburban state parks offer an assortment of family activities, including an off-leash area for dogs, a hot-air balloon site, horseshoe pits, model-airplane fields and places to rent boats and horses.

I paid no attention to Chatfield as a place to hike until my family moved to the neighborhood across from the entrance. Now I use my state parks pass  to visit Chatfield every week.

To my surprise, Chatfield has 26 miles of trails for hiking and biking, 12 of them paved. I prefer the quieter south end, where herons, white pelicans and cormorants compete with fly fishermen for food. The stands of giant yellow cottonwoods here look wonderful in autumn, but carry insect repellent if you venture within.

One of my favorite haunts is a lakeside trail at the southeast end of the reservoir, which descends to a thin sand beach populated by many birds and few humans. This can turn into a hilly, 10-mile hike if you’re inclined.

An easier trail to check out: The one along the dam at the north end of the reservoir. High above the lake and spillway, walk a flat, asphalt road up to 2.4 miles, then turn around and gawk at the mountains to the west. This is a great sunset stroll.

Just outside of Eldorado Springs, 9 miles from Boulder

Eldorado Canyon deserves its name, which means “heaven” in Spanish. It’s a beautiful place for a state park visit in autumn, whether you’re hiking one of its many trails, scaling the vertical, rook-shaped Bastille or just watching South Boulder Creek waterfalls flow past the yellow trees.

One drawback: the Rattlesnake Gulch loop, which climbs 800 feet to the ruins of the Crags Hotel and 400 feet higher to a Continental Divide overlook, is closed. Flood damage from the September 2013 rains forced the park staff to declare the trail off limits to humans this year. It remains open to rattlesnakes.

Trail to check out: The wheelchair-accessible Fowler Trail snakes beside the creek, and there are descent trails beside the technical climbing routes. I hiked up the West Ridge trail toward the summit of Shirt Tail Peak. Whew, that was steep — but heavenly. 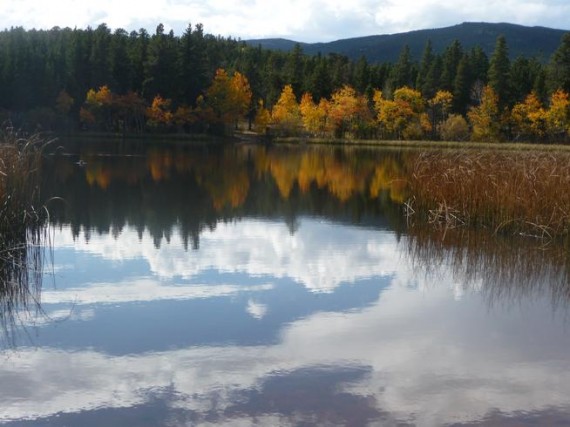