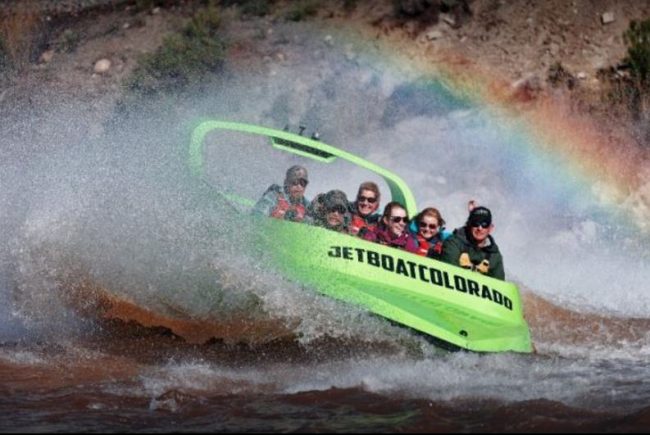 I wouldn’t say I “feel the need for speed” but as we raced across the Colorado River with Jet Boat Colorado, I sure did like it. A lot.

I had never heard of jet boating until a friend went to New Zealand last year and posted a video of her 45 mph adventure through narrow canyons as their boat barely skirted the banks of the river. I never dreamed I would have the opportunity to try it out myself until I learned Jet Boat Colorado offers Coloradoans the same adrenaline-charged adventure as our Kiwi counterparts on a slice of the Colorado River outside of De Beque, a historic community nestled near the Roan Plateau and Grand Junction.

“Location is key here,” says owner and operator Joe Keys and after barreling down the river at top speeds, I could see why. This stretch of the Colorado River is seldom used due to its remote location and lack of public access. “We wanted an area where we could go fast without bothering our neighbors or worrying about tubers or fishermen.”

Jet Boat Colorado offers two different tours:  Thrilling or Scenic and there wasn’t a question which tour we would do. As we loaded into our florescent green speed boat, we were given a safety debriefing and a preliminary “test” to see how we would handle the adventure.  As we flew across the water, Joe waved his hand in the air in a circular motion like a cowboy drawing his lasso before he launched the boat into a 360-degree spin. Enveloped in the splash and sunshine, we enthusiastically gave him the thumb’s up and declared ourselves ALL IN!

Jet Boat Colorado’s boat, Wild Mustang, is 20 feet long and holds 11 passengers. It is powered by a GM V8 truck engine with 420 horse power and 450-foot pounds of torque. Even though the boat is fast, it is built for more maneuverability than speed. As we experienced cowboy spins, fishtails, power slides and speed runs, Joe seemed to have every nuance of the Colorado River memorized.

With a background in the tourism/recreation business, Joe has spent three decades guiding backcountry hunting, fishing, hiking and river trips. As a Northern California native, Jet Boats were extremely popular and he never understood why so few people were doing it in Colorado. In 1997, he was river guiding in New Zealand and saw the Kiwi Jet Boat design that was perfect for the Colorado River. Fast-forward to 2015 and he started the process of securing permits and the boat design to launch his Jet Boat business. “Our trips are patterned after a New Zealand-style Jet Boat tour but with Western Colorado flair,” he says.

I’ve driven through this part of Colorado many times and had written it off as a barren wasteland but was fascinated to learn De Beque’s rich old west history with ferry sites, homestead stories and fascinating geology. At one point, as he pointed out two eagles’ nests with Mama Eagle and her very large “baby” standing sentry, it was confirmed to me this was an experience like no other.

Taking pictures during our thrill ride was pretty impossible because we were holding onto our bar for dear life but Jet Boat Colorado has a GoPro attached to the boat and they pull 8-12 video clips of the trip, as well as about 40 still photos that can be purchased as a package.

I have yet to see our pictures but two things are for sure: there will be a lot of drenched water moments and just as much laughter.

Jet Boat Colorado operates every day from mid-May through mid-September. Children should be at least 40-inches tall and 50 pounds to participate. For additional information, be sure to read their Frequently Asked Questions.