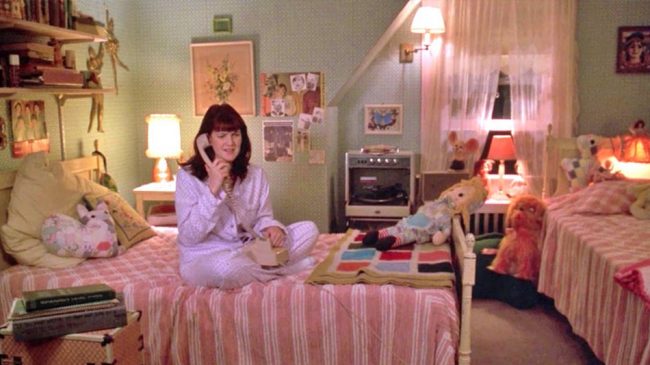 The Joy of the Rotary Phone Squee

When I was young, we spent the greater part of our afternoons and evenings in idle gossip. My friends and I would lie on our respective living room couches, or on the carpeted bedroom floors of our suburban ranch homes, and press telephone receivers up against our ears. We’d giggle into what was, back then, a rotary phone, or a fancy new push button model. Those telephones are not like what we have now. They were connected to the wall by a long cord that seemed, to us, like some kind of social lifeline.

And those plastic-wrapped bundles of wire were social lifelines. What traveled along those wires were our complaints, our gossipy stories, our hopes, our mistakes, and our dreams. What traveled along those wires were not just words, but heartfelt vibrations that started in the receiver, traveled down the coiled handset cord that looked like a slinky, and went straight into the hearts of our girlfriends and, if we were lucky, into those of our boyfriends as well.

In this way, we really heard those we were communicating with. Literally. We heard the guffaws and the wisecracks, the long-winded sighs that would have been impossible to translate into any words. We heard when a friend’s voice was about to crack, so we knew when to back off or stray to another topic. We heard not just the words of our friends, but we heard the tone of their souls. We were in no rush.

Now, we rarely talk to people this way. Most of us rarely, if ever, lie on the bedroom floor for hours, chatting about nothing in particular while unconsciously twisting the phone cord around a pinkie finger. In this age of smart phones and social networking, it seems that social sites such as Facebook, Instagram and Twitter have completely replaced our time spent listening.  More than anything, social networking is not so much about listening as it is about talking.

What fun is there in reading quirky comments on an electronic page, where the guffaws and voice inflections and all-telling sighs are lost somewhere between the pixels? What fun can be found in the swiftness and concision of a text message? What things are we missing that are hidden between the lines?

The sad answer is that we will never know. Will kids raised on social media ever really know the subtleties of meaningful, yet idle, conversation? There are no texts or Facebook posts, however clever, that can compete with the creative conversational meandering that leads a friendship into new, and unexpected, territory. Not to mention the most important part: it is totally impossible to paint our toes while we tweet.

We use bits and bytes and blips and screens and fonts to isolate and compartmentalize our relationships into something that resembles business. Nowadays, we just want to cut to the chase. We don’t want to waste our time. Or our words. As with the 140 character limit of Twitter, we are inadvertently encouraged by the technology to say as little as possible as quickly as possible. This is not how real relationships are built; this is how business is streamlined. We are mechanizing our relationships; we are bringing them to bare bones.

I wonder if some day we may look back and imagine laughing, sighing, and squealing into a receiver as a quaint mode of the past, much like we today view the sending of a telegram, or even the sending of a stamped personal correspondence via traditional mail (when is the last time you got one of those?). In either case, maybe if we had the willpower we would log off and shut down. Maybe we would toss our cells into the sea, like in that familiar beer commercial. Maybe we would instead pick up a phone that is not counting down our “minutes.” 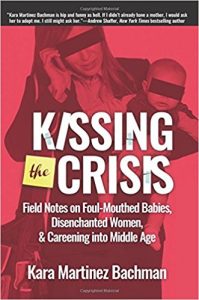 Although I won’t eschew the “socials” any time soon, I personally vote for a back-to-basics embrace of time spent in idle, pointless chatter. And the kind of chatter I speak of is not the kind found in tweets, but the kind found in a voice that is about to crack. Or in a barely audible “hmmm.” Or best of all, in my very favorite: a high-pitched, girlish, totally pointless, un-translatable and highly inefficient “Squee!”

Kara Martinez Bachman is author of the women’s humor essay collection on parenting, relationships and the pros and cons of reaching midlife, “Kissing the Crisis: Field Notes on Foul-Mouthed Babies, Disenchanted Women and Careening into Middle Age.” Her work has been heard on NPR radio and has appeared in dozens of publications, including The Writer, Funny Times, the New Orleans Times-Picayune, the Erma Bombeck Writers’ Workshop and many parenting magazines.