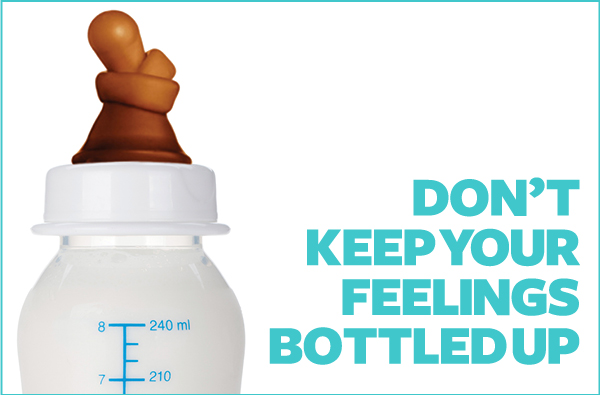 Keeping Up My Happy Mama Facade: One Mom’s Struggle

At 33, after a lot of work and sacrifice, my first son was born.  My husband, Jason, and I were so excited to be parents.This next step in our adventure together would be full of love and joy.  Just like the diaper commercials, love at first sight.

Thanks to maternity leave, we spent 8 beautiful weeks together with our child, adjusting to family life.  At my six week follow up appointment the doctor gave me a questionnaire about how I was feeling emotionally.  I read the questions and responded “I’m fine!  Great!  Everything is awesome!”  I regarded the exercise like a quiz in a magazine.  The kind where you know what the acceptable answer is, and which answers will reveal all your personality flaws.  So things were not 100% awesome, but they were mostly good, and isn’t life supposed to change anyway when you have a baby?  Isn’t discomfort and lack of sleep the punchline of all the mediocre parenting jokes in the world?  I genuinely wondered how many folks actually feel so bad that they would select some of the more severe answers on the questionnaire.  And thus, I began to craft my Happy Mom façade, my protective outer coating meant to help me blend in with all the other moms out there who completely have their stuff together.  I believed that I could fake it until I made it happen.  I’m a strong, smart, capable woman and I should be able to do this motherhood thing.  Pull your stuff together!  Be stronger!

Jason went back to work, and I picked up a new part time job that allowed me to keep my son with me.  Breastfeeding is hard, a new job is stressful, but everything is fine.  Months went by and I began to struggle with new, intrusive thoughts that popped into my head multiple times a day.  I’m not feeding him enough, and he is going to starve to death.  He’s going to stop breathing in the middle of the night.  I’m going to drop or possibly throw this child down the steps.  It might be an accident, but it might not.  No you won’t, that’s ridiculous (and scary!)  What is wrong with me?  Maybe I should drop my child off at the fire department.  It’s a Safe Haven right?

Looking back, there wasn’t any one particular day where I noticed a drop in my well-being, it happened slowly, an undetectable slide into a very painful and exhausting reality.  I thought that if I told anyone, my partner or my doctor, that I’d be revealing myself as the bad mother, the weak female, or the crazy person I suspected I might be.  Maybe my partner would take the kid and leave me.  Maybe someone would call Child Protective Services and take my child away.  Better to stay silent then, and hope that it would just get better on it’s own.

The silence grew long and isolating, and the intrusive thoughts grew louder and more frequent.  I was terrified of myself, and worried for my kid.  I became tired, angry, and secretive in the service of keeping up my Happy Mom façade.  I believed that having a child, one we had worked so very hard to create, had been a mistake, and that I was the worst parent.

Then, I broke.  At seven months postpartum, a stressful personal event brought all these emotions to a head.  I knew that something was wrong, and it wasn’t going away on it’s own, instead it seemed to be getting worse every day.  I reached out to an acquaintance, the wife of a former co-worker halfway across the country.  She had just started her own non-profit organization to help moms who were dealing with pregnancy-related depression, after she had experienced it herself.  She responded immediately and asked for my phone number.  We talked for two hours.

What I remember was her refrain “It can get better.  You are not alone.”  She helped me locate resources in Colorado through the network she worked with, Postpartum Support International.  We picked a support group, and I promised to go to the next meeting.  She promised to hold me accountable and to check in on me.

The group and the facilitator saved my family.  I learned that intrusive thoughts were a part of pregnancy-related depression and anxiety, and I could voice my fears and concerns with other moms who had experienced similar thoughts and reactions.  The facilitator visited my home and talked with Jason about what was happening and how to support me.  Jason had noticed that I had withdrawn, that my behavior was different, but didn’t know how to respond.  He acknowledges now that he had no frame of reference to recognize that this is what pregnancy-related depression and anxiety can look like.   We both know better now.

I did not want to accept that I needed medication to function, fearing that taking medication would be admitting that I was not strong enough as a mom.  That I was a failure.  Then, during a support group meeting after I shared all of the reasons I did not want to try medication, somebody asked the simple question, “What if it works?”  That was enough to send me back to the Doctor, in tears. I revisited that questionnaire.I began taking Zoloft that evening, and within two weeks, I felt renewed.  After a year, I was able to feel like myself again without medication.

We just had our second child 11 weeks ago.  I was afraid that I might repeat my experience with anxiety and depression even though every single pregnancy is different.  Just because you had pregnancy-related depression and anxiety with one child doesn’t guarantee that you’ll have it in another pregnancy.  And just because you didn’t have it does not mean that it won’t happen to you ever.  This time I knew what to look for and what resources were available.  At 8 weeks post partum, those intrusive thoughts returned.  Unlike before, I could name them as what they were, anxiety related to a chemical and hormonal imbalance in my brain.  Not a personality flaw.  Not a lack of strength.  I reached out immediately for help, which I know now, is a sign of my strength as a mom.

Remember, you aren’t alone and you can get help.

If you or someone you love is struggling with pregnancy-related depression and anxiety, visit www.postpartum.net/colorado for more information and to find Colorado coordinators who can give you support and resources in your area. You can also call 1.800.944.4773 for confidential, free and immediate English or Spanish language support. In partnership with Mile High Mamas.