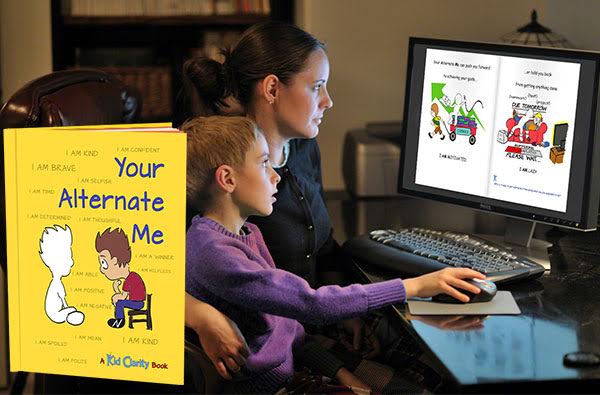 How “Your Alternate Me” Came to Be

I wrote this book to help my 7-year-old self.
Really.
If I’m being completely honest, I have to admit that at that age I was an emotional eggshell, my psyche easily prone to cracking under any form of criticism or adversity. A few examples I vividly remember that very year:
– Breaking my classmate’s pencil in half in a fit of overly-dramatic retaliation for teasing me about having a crush on a girl (which was 100% true)…only to find out he had borrowed said pencil from our teacher.
– Being overwhelmed by frustration caused by procrastination (that was caused by perfectionism) in organizing my thoughts to complete an otherwise straight-forward book report.
– In spite of testing into the highest-level math group, feeling like a complete fraud after not doing as well on the first quiz as I would’ve hoped.
The circumstances themselves weren’t out of the ordinary as far as childhood trials and tribulations go. The way I responded to these and many other situations, however, proved to very significant as time went on—namely how I perceived myself, my environment and my ability to influence their outcomes.
Subsequently, this affected the choices I made well into adulthood, many often characterized by self-doubt and fear. Metaphorically speaking, I would travel along one path with blinders on; occasionally I’d manage to turn my head to catch a glimpse of other roads, ones that I could have/should have diverted onto but held myself back from doing so.
(Don’t get me wrong, I am not wallowing in self pity. I have taken accountability for my decisions and have found peace with where I am in life. That being said, I wish I had these seeds of awareness planted in my mind early on–I’m confident they would have served me well down the road.)
My writing this book was preceded by a solid year of introspection and immersing myself in the psychology of personal development. To clarify, this does not make me a certified expert in the field, nor would I try to pass myself off as one. I simply created it out of a sincere desire to help kids, especially those who are not unlike the one I used to be, grow up with a greater degree of resilience, conscientiousness and caring.
The title of this book, Your Alternate Me introduces a concept that many are familiar with by some other names:
The voice in your head.
Your inner critic.
Your gut instinct.
Kids will learn how their alternate me plays a key role in what they think and do, but also how they in turn can influence it. The goal of this book is to teach kids to realize that they are in control of how they think about themselves and the world around them.
I’ve since decided that Your Alternate Me will serve as a primer for a series of books, collectively known as Kid Clarity. Each book will incorporate the alternate me theme and focus on a single topic (e.g., procrastination, grit, empathy, etc.). The belief is that by instilling these positive traits into our kids’ awareness now, we set them up for success in the future.

Kid Clarity – Your Alternate Me from Greysn Media Design on Vimeo.

In other words, I hope to help children become more mindful thinkers.
Ty Ono is a graphic designer/digital-media editor/Broncos & Buffs fan living in the Denver-metro area with all the respect and admiration in the world for stay-at-home moms. He recently wrote and illustrated his first children’s picture book that’s designed to help kids become more mindful thinkers. You can read for free here: http://www.kidclarity.com/free-book