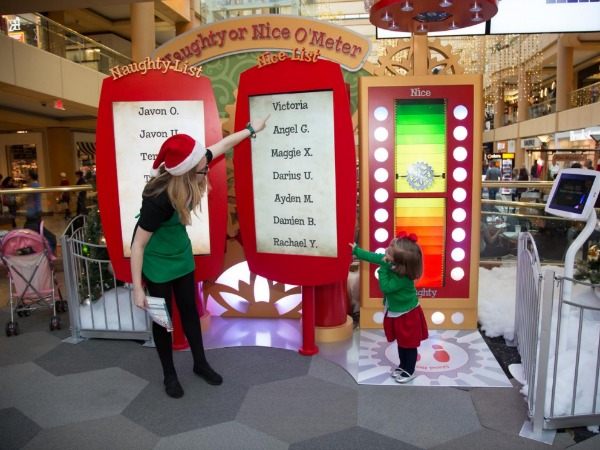 Santa has arrived at FlatIron Crossing, and my kid is not happy about it. 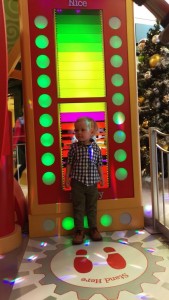 Let me back up. My son is two-and-a-half. He loves the idea of Santa Claus. The entire drive to visit him at FlatIrons, he practiced asking Santa for a certain present, please. (His certain present? A “Big Percy” … which if Santa has any ideas on how to make that happen and what, exactly, that is, I’d love to hear it.) Yet when he actually saw the big man, my son tried to climb up me like a squirrel escaping a dog.

So Santa was a no-go, but there were plenty of other adorable things to enjoy about the new Santa HQ. It’s set up at the bottom of the mall’s grand staircase, a cute workshop ensconced in twinkling Christmas trees, and includes three stations before you get to meet the jolly old elf.

First, kids get scanned by the Naughty-or-Nice ‘O Meter, and their name appears on a big board—one side for nice and one side for naughty. (Can you imagine an overworked elf putting some whining kid on the naughty side? Because I can, and it fills me with terrible glee.) Next, kids can explore Santa’s workshop using Elf-Ray Vision. Using a cool augmented reality tablet, you can take a peek into the hidden workings of Santa’s workshop—holding up the tablet to photos on the workshop walls, we saw animated presents moving down an assembly line. The luddite in me was highly impressed, and my son could have spent the entire visit hanging out in that little room.

Finally, in the last stop before actually meeting Santa, kids get the chance to get their photo in front of a winter scene. And then, the moment they’ve all* been waiting for …. (*All not including my kid.) Santa sits on the back of a big sleigh laden with gifts. And I can tell you from experience that he’s gentle and great with kids, even the ones who clutch at their moms when they come within ten feet of the guy. Good job, Santa. 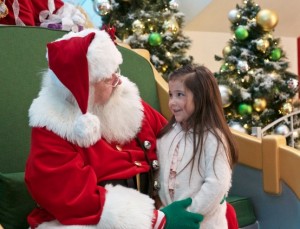 Despite my son being terrified of Santa, we loved checking out Santa HQ. Santa and his elves will stay at FlatIron Crossing until Christmas Eve. Then they’ve got a prior engagement delivering something called a “Big Percy” to a certain Denver toddler.

Reservations are available to meet Santa, but not required. And be sure to check out some of the special events running this holiday season, including special days for pets to meet Santa. Only cats or dogs are allowed, which makes me giggle thinking of what animal incited that rule. I imagine someone leading their alpaca named Dennis to meet Santa and leaving very disappointed. (Maybe next year, Dennis.)

Jenny lives in Denver with her husband, son, and two fat tabbies. She’s a mom by day, a writer by night, and a traveler whenever she gets the chance. Follow her on her blog or on Twitter.

Mile High Mamas is giving away a complimentary photo package for Santa HQ valued at $49.98 to gift. Be sure to enter as many as five times below.