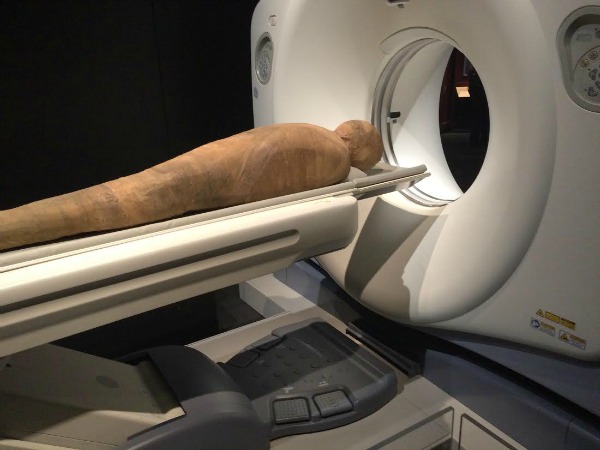 Dead Men Don’t Talk…Or Do They?

The weather is getting cooler. Bare branches make eerie shadows in the moonlight.

There’s never been a better time to go look at some dead stuff.

I’m sure there’s a historian out there who just cringed a little.

But really, when you’re talking about kids and history at this time of year…what better way to entice them?

It was on a cool, fall evening such as I described that my kids and I headed out for an adventure. And here’s what we discovered.

The Denver Museum of Nature and Science is temporarily hosting a remarkable exhibit called Mummies: New Secrets from the Tombs. By combining historical facts with new scientific discoveries, this event is sure to please everyone in the family – from the mom who enjoys looking at the beautifully intricate ancient art…to the kid who can use a CT scanner to investigate a replica mummy.

As an added bonus, the museum is showing Mummies: Secrets of the Pharaohs, the perfect complement to the exhibit. This IMAX film shows not only how archeologists discovered valuable ancient tombs, but also how current scientists are using DNA from the mummies they’ve uncovered (no pun intended) to help find cures for diseases humans still suffer from today.

Did you know that the Egyptians were meticulous in detailing almost everything they did…except the mummification process, which is still a mystery? Neither did I until I saw that movie.

The IMAX film was the perfect introduction to the exhibit; it gave us some background on new and old breakthroughs that really enhanced our experience as we walked through the mummies and other pieces on display. My kids loved listening to the experts scattered around, speaking about ancient techniques and rituals. And I enjoyed learning more about both the Egyptian and Peruvian cultures.

So as the weather gets colder and you’re looking for something to do while you stay warm…go check out the mummies at the Denver Museum of Nature and Science.

Usually mummies don’t go anywhere, but these will only be there until February 5, 2017.