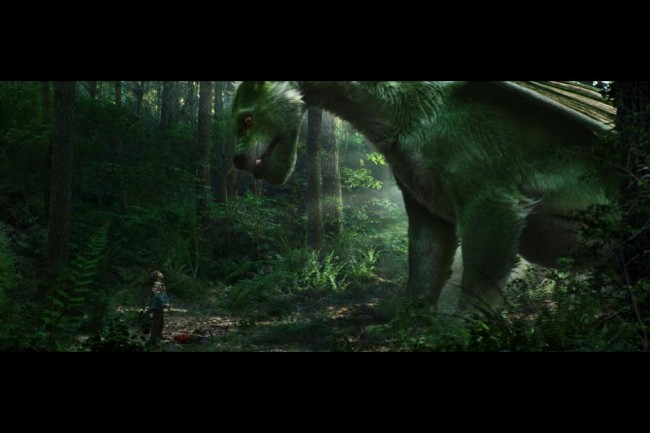 “Pete’s Dragon” Gets a Fresh, Fun Coat of Fur

Disney is slowly amassing a collection of live-action adaptations of their most popular animated movies. In 2015, they gave us the gorgeous and delightful Cinderella. Earlier in 2016, you probably caught The Jungle Book, which was packed with jaw-dropping action and animal hijinks.

Late summer ushers a gentle, tenderhearted re-imagining of 1977’s Pete’s Dragon. Parents might remember an animated doofy-but-loving green and purple dragon named Elliot and his boy, Pete. This is about as far as similarities go between the original film and the new adaptation.

There are glaring, major, key differences in the plots. Ardent fans of the 1977 version starring Helen Reddy and Mickey Rooney should not expect a close mirroring of the story. The circumstances of how Pete and Elliot meet and how Pete finds a human connection are completely turned on their heads. Purists might mourn the changes, but give it a chance. The new version has more depth, with layers of history and driving motivations not found in the first film. Don’t expect singing. Don’t expect slapstick. Do expect to cry—and laugh. Do expect a dragon.

And whoa, what a dragon! 2016’s Elliot is beautifully animated. He’s a charming doglike beast you can’t help but adore. Disney truly stepped it up when they created him in all of his green furry glory, filling him with emotion and enough life to believe he could really be out there somewhere.

Pete (Oakes Fegley) is well-cast as the precocious and mysterious boy from the woods with a tale to tell. Bryce Dallas Howard (The Help and Jurassic World) is skeptical forest ranger Grace who brings steady warmth to move the story forward. She also happens to be the daughter of a man named Meacham (Robert Redford) who loves to regale the town’s children with stories of his own dragon sighting. Could it be true?

Pete’s Dragon suffers a bit from predictability. The villain wants to capitalize on the whole There’s a Dragon in Town stroke of good fortune. Should Pete be raised by a dragon or a human family? There are few surprises when it comes to the story itself. It is saved by solid performances and amazing special effects. We saw it in 3D, which was a good choice. Rather than the typical fly-in-your-face feel, the 3D is done to give it a layered look, almost like a painting. It’s not distracting.

Pete’s Dragon is not the strongest of Disney’s recent live-action offerings, but it’s a sturdy, sweet movie that satisfies.