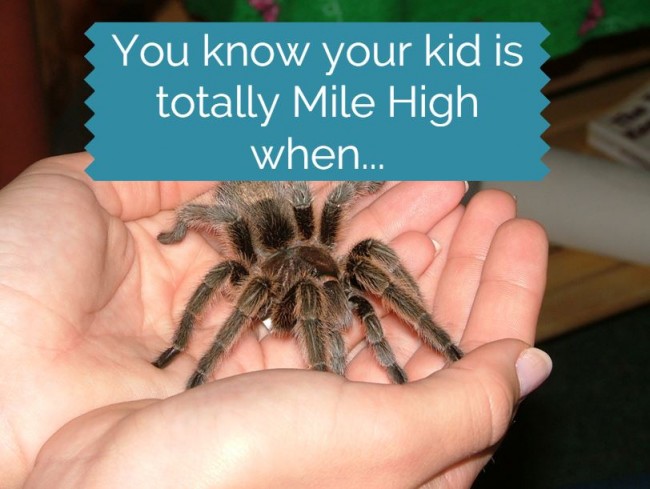 You Know Your Kid is Mile High When….

2. He’s poured half a bottle of honey on a Casa Bonita sopapilla.

3. She skied before she lost her first tooth.

5. One day, they are wearing shorts and romping at the park. The next school is cancelled because of a blizzard.

6. You have a debate whether the Wells Fargo building is a typewriter or a cash register. Then you have to explain what a typewriter is.

7. She’s colored in the bubbles on a CSAP test.

9. He wears Crocs with socks to church.

10. She knows how to pop her ears when driving over Vail Pass.

15. She can almost hold her breath for the entire length of the Eisenhower tunnel.

16. He can say Dick’s Sporting Goods Park without giggling.

17. A week’s allowance has been left in a pay telescope on Lookout Mountain.

18. They have nightmares about the big blue mustang at DIA.

19. She can properly pronounce Uncompaghre, Ouray, and Hickenlooper.

20. When you go on vacation to sea level, it’s the first time you realize she has curls.

21. He has a favorite Tattered Cover.

22. Their idea of a beach is a pebble-covered shore next to an icy, murky reservoir.

23. The biggest palm trees they’ve seen in person are metal and on the corner of 88th and Wadsworth.

25. You don’t let them watch the local news because there was an avalanche, tornado, forest fire, rockslide, flash flood, runaway balloon, and arrested Denver Bronco all in one day.