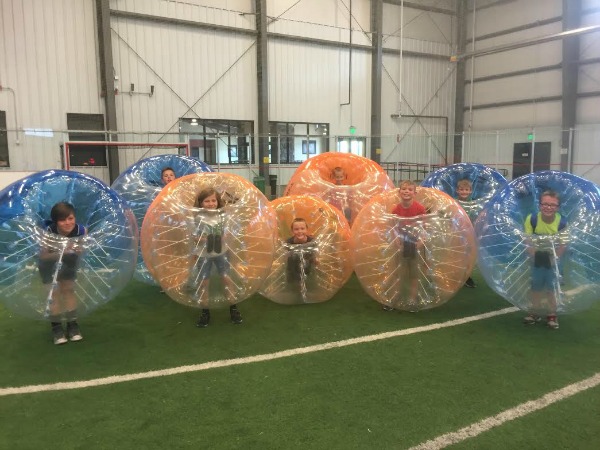 It’s been more than a year since I first saw the Apex Field House in Arvada advertise Bubble Soccer and I’ve since dreamed of playing it with my son’s friends. After all, what could be more fun for a group of soccer-loving boys than to wear an over-sized inflatable suit and be encouraged to knock your buddies over?

The game itself is a cross between soccer and zorbing, a sport where an individual rolls down the side of a hill in a giant plastic orb. The main objective in bubble soccer is to bump, kick and score your way to your opponent’s net.

Now, lest you think this was a big Sumo wrestling free-for-all, let me assure you tha comes later. Apex Center staffer Whitney started by explaining the rules that included the guideline: “You can bump players but be careful not to make ‘illegal’ contact – which is hitting from behind, or against the wall (boarding).” She demonstrated how to slide the bubble over the boys’ heads, adjust the straps, grab the handles and GO!

Whitney threw the soccer ball in the air and the boys fearlessly waddled/rushed to the center of the field in an attempt to kick the ball. Truthfully, it took them a few minutes to get their balance and the strategy behind the game but once they figured it out, there was a lot of laughter, hilarious bumps and rolls and a couple of kids who got lodged upside down in the amazingly impact-absorbing globes.

My son has some friends who play competitive soccer and others who don’t play at all but everyone had a blast–those bubble suits are the great equalizer. There’s nothing like becoming a human wrecking ball to create memories to last a lifetime.

After a sweaty and fun 50 minutes, Whitney gathered us together at center court for a Sumo Showdown to end our one-hour session. The boys faced off two at a time with the objective to push each other out of the circle.  In their bubble suits. And thankfully without thongs. 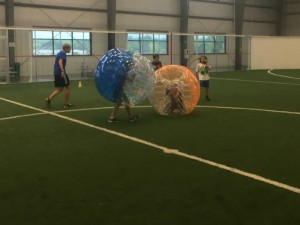 They implemented a few different strategies that involved hitting each other straight-on, running away or trying to trip up their competition but there was none more nefarious that my dear husband Jamie. When I innocently challenged him to a duel, I expected a good-natured bump fest.

What I got: a raging bull with blood-thirsty eyes wrapped up in an over-sized bubble suit. With nostrils flaring, Jamie charged me like I was his dobladore on the streets of Pamplona’s old quarter. He didn’t just knock me over, he gored my bubble with such force that I not only fell flat on my back but he literally knocked my shoe off.

“What the?” I slowly staggered to my feet and before I could find a defensible position, he was back to finish me off, shoeless and all. This time, I didn’t get up.

“Why didn’t you stop the first time?” I demanded.

“You weren’t knocked out of the ring. I had unfinished business.”  Bull-Man did his victory lap playing to the cheers of the crowd.

I later shared the story with friends on social media, ending my tale with the hashtag #GuessWhoIsSleepingOnTheCouchTonight, to which my friend Paul retorted, “At least he’ll have his bubble suit to keep him warm.”

Just beware of the bull.