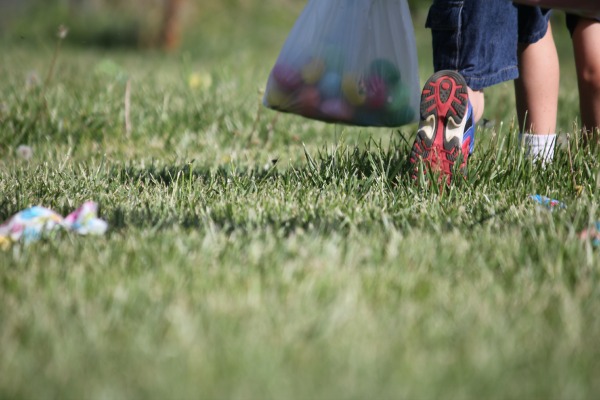 Not mysterious enough? Here’s another one. Why is it that they only put one metal egg dipper in the Easter egg coloring kit? Don’t they know that the average American family has 3.18 kids? Why not 3.18 dippers per box? Because that’s how they get ya, that’s why! If you want 3.18 of those ingeniously designed egg dippers, you’re going to have to buy 3.18 boxes of egg coloring. And you know you have to because spoons just don’t work as well. You just can’t dye eggs without those dippers!

Here is something you can do without: that annoying, green, fake grass that goes in the Easter baskets. That stuff gets everywhere! It’s like finding sand in your underwear days after you’ve been to the beach. Every year I end up cleaning up little strands of Easter grass until Independence Day.

Speaking of Independence Day, every year we know that Independence Day will be on the fourth of July, no fail. But, Easter changes from year to year. Why is that? This is a mystery that actually has an answer. According to the all-knowing Wiki:

Easter falls at some point between late March and late April each year, following the cycle of the moon. After several centuries of disagreement, all churches accepted the computation of the Alexandrian Church, now the Coptic church, that Easter is the first Sunday after the first fourteenth day of the moon (the Paschal full moon) that is on or after March 21st (the ecclesiastical spring, or vernal, equinox).

Although Easter Sunday changes from year to year, I never miss watching The Ten Commandments. What is the mystery in that? The mystery is this: How is it that year after year Yule Brenner just keeps getting sexier? I love it when he says, “Moses and the Hebrews think they can out-wise my fathah.”

Oh, there are many things that are mysterious about Easter but probably the biggest mystery of all is why the Easter Bunny brings eggs? Bunnies don’t lay eggs, chickens lay eggs. Should an Easter Chicken bring eggs? The Easter Bunny should bring, um, Easter Pellets?