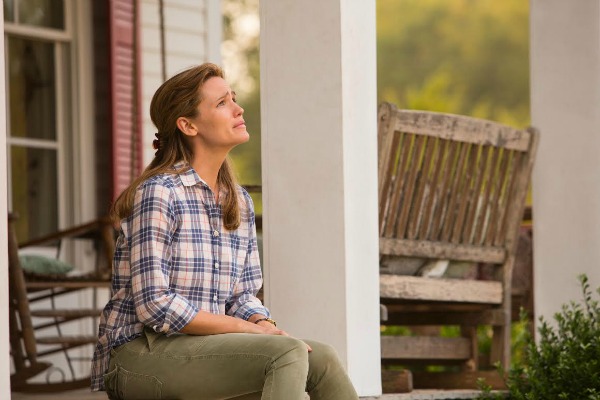 Miracles from Heaven: One Mom’s Miraculous Fight for her Medically Fragile Child

Mothers will go to the the fringes of the universe for their children. For mothers of medically fragile children, these fringes become home. They pursue answers and possibilities, educating themselves along the way. They are armed with hope, wisdom, and a fierce love that maintains tenderness. At the end of the day, they are the source of tenderness in a painful, bewildering set of circumstances.

But mothers are human. They sway under the weight of worry. Their faith is challenged. Finances are drained as they watch once-vibrant children fade away. How do families cope when a child suffers a deadly disease?

One Texas mom, Christy Beam, wrote an extraordinary account of her own family’s journey through receiving a frightening, terminal diagnosis for their young daughter, Anna. Beam’s book is called Miracles from Heaven. Mile High Mamas recently met Christy Beam and the filmmakers behind the new movie of the same title.

Initially thought to have an easy-to-fix upset tummy, Anna worsened drastically until she was diagnosed with an incurable disorder called Pediatric Chronic Intestinal Pseudo-Obstruction (or called CIPO). A child’s intestines lose the ability to move food and waste through, leading to the inability to absorb nutrients. It’s painful, debilitating, and eventually requires tube feeding. CIPO causes a drastically shortened life span. There is no cure, only medications to ease symptoms. Only 200 children a year are diagnosed with CIPO. Few doctors recognize the symptoms. Fewer have the knowledge and skill to treat it.

After years of treating Anna’s symptoms, consulting specialists, and travelling across the country, it looked like options were few. Hope was dimming and faith was frayed. That’s the perfect time for a miracle.

However, the word “miracle” wasn’t on the tip of anyone’s tongue. It wasn’t even a passing thought with such a dire diagnosis on board. Yet, it’s what they got.

Anna was miraculously cured. She had a bizarre accident that should have killed her. Anna walked away with surface injuries, which is a miracle in itself. Soon, it became apparent her accident was the beginning of a remarkable, documentable, complete healing of her entire body. Her pain faded. Her stomach bloating decreased. She could eat, digest, and live normally.

Beam’s story is so compelling and remarkable it has been adapted into a Columbia Pictures film starring Jennifer Garner, Queen Latifah, and Kylie Rogers. Miracles from Heaven, the film, opens on March 16, 2016. The Beam family worked closely with the cast and crew to breathe beautiful life into a big-screen experience that will capture hearts and stir possibilities.

Hollywood doesn’t have the best track record when it comes to representing people of faith with respect. Miracles from Heaven doesn’t shy away from the Beam family’s beliefs there is a loving God who is in control. The church community is depicted positively, with warmth and accuracy rarely found. This is a testament to the power of the Beam family’s story.

A medical miracle occurred. There is no scientific explanation, no medical explanation. It’s indisputable. It’s a movie-worthy, book-worthy, newsworthy story. But it’s more than a happy, mysterious, tidy ending.

Miracles from Heaven is a gorgeously told love story about how far a family will go to save one of their own. Take away the miracle aspect and you have a solid drama about courage when hope is gone. Jennifer Garner is perfectly cast as Christy Beam. She is warm, yet tough. She is bewildered, but wise. She brilliantly conveys the emotions a mother would feel as she watches her beloved child deteriorate. Garner and Beam became fast friends, relating to each other as moms.

Garner shared her initial reaction when she read the script. “I stayed up all night.I felt sick. Don’t you? Don’t you just feel sick? Did you even know that Pseudo Obstruction Motility Disorder was a thing that children are suffering from right now and moms are sitting next to them while their kid is going in for their twelfth colonoscopy of the year?”

Beam was quick to praise Garner’s dedication and heart for the story. “Jennifer and I got to be fast friends and I shared so much. She had so much to learn and she absorbed it just like a sponge, she was so great.” 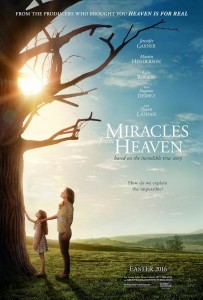 On the surface, Miracles from Heaven appears to be solely about the diagnosis and ultimate miraculous healing of Anna Beam. However, the film deftly underscores a key theme that we are all part of miracles happening daily, right under our noses or behind us in the drive-thru line. Miracles are a timely smile, a friendly offer, the person who goes above and beyond to help a stranger when they don’t have to. Miracles occur when we bend the rules a bit, when we listen to our intuition, when we reach out to one another.

Christy Beam shared what she hopes audiences will take away from the film: “I love the message about the miracles are around you and they’re happening daily…I want people to leave with new lenses in their eyes,they see differently, they have a better hope and inspiration and they’re encouraged by it. I want it to be that when I was going through such darkness and trial and struggle I just kept my head down, put one foot in front of the other and just get through it. And I look back and I see all those miracles that were happening and I missed them. And I feel like had I not missed them, those would have been such messages of hope to inspire me and propel me forward without me just having to do it with the grit of my teeth. And so that’s what I want other people to walk away with, recognizing those things that are going on around them that can propel them, that can give them the hope and inspiration they need.”

Yet, Beam admits it’s not easy seeing such a painful time in the life of her family on the big screen. When asked if it was emotionally difficult to watch the film, she confided, “Every time. Every time it’s hard. It’s a struggle every time. Even though I know it’s a happy ending, I still watch how well they were written…they were written so exact to what we endured that it still rips open old wounds.”

Some of the more wrenching events of Anna’s frightening ordeal occurred when they were seeking a diagnosis. They literally begged doctors to look deeper into why Anna was deteriorating so rapidly. Beam was asked if the film fairly depicted the attitudes of some of the medical providers they encountered. “I feel like it was so well done. I don’t feel like their hearts were mean or their hearts were setting out to do something wrong. I don’t even feel like they were incompetent at what they do, I just feel like it was just another day in the office, it was just another child with an illness, it was just another test or diagnosis. It was the way it was written and the way they played it out was so spot on to what it was. It wasn’t malicious or hurtful. It was just ‘eh’ and that’s how it was.”

Beam was quick to note that much good has come about from this experience. The book has brought attention to a rare, fatal childhood disease and the Beam family continues to give back to the hospital and doctors who helped save Anna’s life, especially Dr. Samuel Nurko of Boston’s Children’s Hospital. 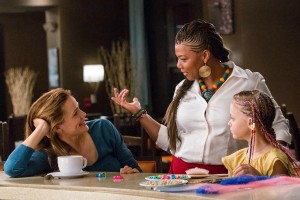 Asked if they’ve returned to the hospital since Anna’s healing, she shared, “We did go back….and it was good for Annabel because she never really got to say goodbye to Dr. Nurko. And so it was good for her. She got to come full circle with him because he is such an important part of her life. She loves him so very much and so we did that. They actually just opened up a foundation. It’s called the Annabel Motility Research and Care Fund and so they’re working to help parents with children with this horrific disorder and give money to research and find what can help cure this incurable disorder. And so we’re involved with that and it’s very fun.”

Parents can relate to the Beam family’s passion to care for one of their own and their spirit of giving back. When a child is medically fragile, miracles seem to be in short supply and few families ever receive a bonafide, confirmed miracle that leads to the complete restoration of health.

Do you believe in miracles? Have you been a part of a miracle or witnessed a miracle?

Miracles from Heaven opens on March 16, 2016.  It is rated PG for dramatic medical situations and depictions. Visit the website for more updates, trailers, and news: http://www.miraclesfromheaven-movie.com/

Be sure to read yesterday’s article The Inside Scoop on this Amazing True Story.