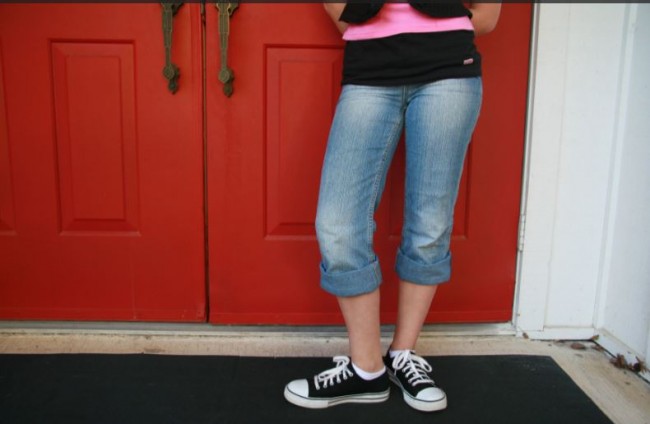 Can We Bully the Bullies?

She meandered across the street in front of my car and grinned at me with her braced teeth.

“Take your time,” I mumbled.

“She’s mean,” my son said from the passenger seat.

“She’s in my choir. She’s a year older than me. Our teacher asked us to move over a little on the risers and when I did she said, ‘Take it easy, b—ch.’”

I looked at the offender again, still grinning at me in a what are you going to do about it? kind of way. “Are you kidding?” I asked my son. “When did this happen?”

Well, never mind that the insult didn’t even make any sense…I watched this girl with a new eye.

Keep walking. But I’m watching you.

This statement, coming from my 14-year-old daughter, who covets her down time, was a little bit of a shock at 11:00 PM.

“She texted me that she needed the Spanish homework printed off from last week and I told her I was already in bed. Now she’s texting me that I’m a b–ch and a whore.”

Now, this is a sports teammate of my daughter’s; everyone else on the team does not speak to this girl because of her behavior and my daughter has always tried to maintain a friendly relationship because she feels bad for her. That, mixed with a fear that this girl will spread false rumors about her throughout the school if she gets mad (and let me tell you…high school rumors are something I wouldn’t wish on anyone), has had my daughter somewhat paralyzed in this toxic “friendship.”

At this point I was sitting up. “I’ll talk to her mom.”

I thought for a minute. “We need to talk to the dean.”

Her eyes filled up with tears. “Her uncle is the dean.”

I received a notification from my neighborhood website that a mom is looking for guidance because her child is being bullied. After trying to talk to the parent about what was going on, the parent of the bully called her many vile names. This was followed by the mother of the offender waiting at the bus stop until the frightened child got off the bus so that she could further harass her.

My neighbor was asking for information about home surveillance systems.

I’ve made a huge mistake in teaching my kids to be good people.

No, seriously…it’s true. They’re scared to speak up for fear of retaliation. They go to school each day, ridiculously expecting that other people are there to learn, maybe talk in the halls a little too long, and drink their Capri Suns in peace at lunch.

In all of my parenting concerns, I didn’t foresee parents who would champion their kids stomping on the weaker, encourage children to belittle whoever they could get their insecure hands on, and generally do what they could to make their own insignificance matter.

As I sat and read the mother’s post on my neighborhood website, the words it’s not fair kept rolling around in my head. Other neighbors offered up helpful advice about restraining orders and contacting the school to ensure the child’s safety. I caught myself before I suggested that the woman install the home security system she was asking about and then send the other family the bill (which I think should be allowed – why should the victim have to pay?).

This isn’t new. When I was in school, the class before me was so bad the middle school principal quit. Two teachers in my high school couldn’t take them anymore and left. This group of kids bullied and cursed, tripped those of us they deemed lower than them and laughed as they stomped on our Trapper Keepers.

Maybe my own mom’s foot dangled over that brake a couple of times.

Catherine Tidd is the author of CONFESSIONS OF A MEDIOCRE WIDOW.  You can read more of her pieces on her blogs,  Widow Chick and Yes, You’re Crazy.