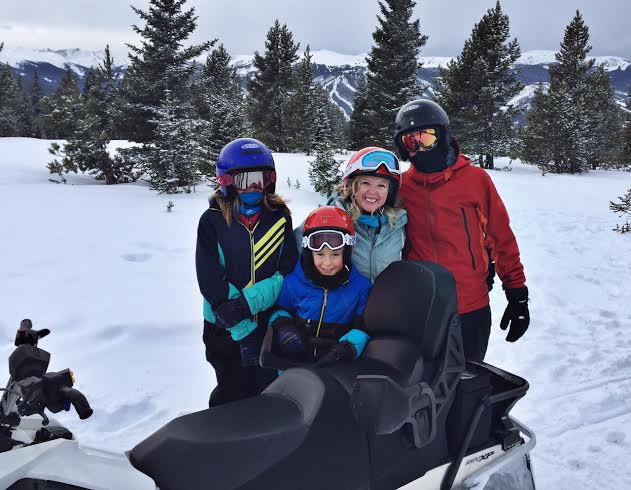 Winter Park: 7 Grand County Family Activities On and Off the Slopes

As I reached the crest of the first hill, I briefly paused to marvel at my exuberant family breaking trail. The snow whirled around them, casting alabastrine shadows that dipped and rose with the terrain as they hopscotched their way on skis down the mountain.

We were in Grand County. As the closest major destination resort to Denver, the Winter Park area is a veritable winter wonderland with a bevy of activities for the entire family–from snowmobiling to free ice skating at Cooper Creek Square to careening down Colorado’s fastest sledding hill at Colorado Adventure Park to warming up at the Foundry Cinema and Bowl. Our weekend was full of fun, laughter and (mis)adventures. And  yes, I’m referring to  when I got locked in the bathroom at Zephyr Mountain Lodge and the kids thoughtfully fed me Starburst under the door. It’s weekends likes ours where memories are made.

About 60 percent of Winter Park resort’s skiers/riders are from the Front Range, making it a local’s favorite with Seven Territories across 3,081 acres. 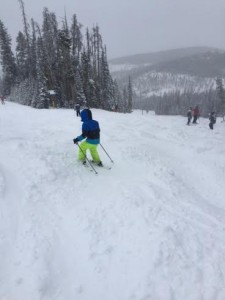 The makings of an amazing ski day: Eat breakfast at Goody’s Mountain Creperie. Gorge on six inches of fresh snow while falling in love with this easily navigable mountain. Capitalize on fresh powder stashes off the Olympia Express Lift (an intermediate Mecca) and try some of the easier bumps at infamous Mary Jane.

We had a brush with mortality while lazily coasting under the Hi-Lonesome Express lift. My kids love skiing in the trees and this beginner’s area is brimming with fun just off the main trail. Jamie took the lead and as we followed him through the gladed obstacle course, he yelled at us to “STOP!” narrowly preventing us from following his course hat launched him over a creek, thus securing his future in the X Games. A few minutes later, Bode encountered a small jump and, panicked he’d end up like his father, opted to go around. Kind of. This is what a tree hugger (or sitter) looks like in Winter Park. 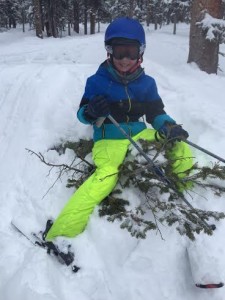 For pricing, ski school and deals information, be sure to read our Winter Park Ski Area feature in our Colorado Ski Guide.

While the rest of my family was born over convenient holidays, Jamie’s entrance to this world was December a.k.a. the busiest time of the year. 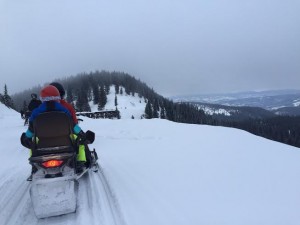 He’s usually overlooked but he was delighted when I surprised him with a guided two-hour snowmobile tour with Grand Adventures, located across from Winter Park Resort. The fact that my kids had never been snowmobiling added to the excitement as we were outfitted with top-of-the-line Ski-Doos with heated hand grips for the driver and passenger (times have changed since my rustic snowmobiling adventures of yesteryear).

Our group followed our hilarious guide Joe through the frosty expanse stipled with Ponderosa and  lodgepole pine, winding our way to nearly 12,000 feet along the Continental Divide. We cut the engines as we marveled at the views of the ski area and the glistening Fraser Valley, listening to the wind clinking through patches of hoarfrost crystals.

There is an extensive network of trails that wind through the Arapahoe National Forest so if you prefer to go it alone, another option is to try Grand Adventures’ two-hour unguided snowmobile rental. If you want to drive over to Grand Lake a.k.a. the Colorado Capital of Snowmobiling, they offer more than 100 miles of trails for the intermediate to advanced rider. Guess what Jamie wants to do for his next birthday? Note to self: don’t set the bar too high. 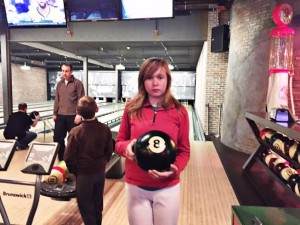 This retro-industrial-designed local’s hotspot in Winter Park is a one-stop shop for indoor fun with a full-service bar, concessions, gourmet grill serving up wood-fired pizza, 8 bowling lanes, two small movie theaters with stow-away snack trays (think airlines but with good eats), billiards, shuffleboard and arcade games. Following a long day in the snow, bowling was the perfect way to unwind…until I bowled my all-time low so sought consolation by sinking into the overstuffed leather couches in between gutter balls.

My son and I battled it out in another way. Me: “The women’s bathroom is the coolest I’ve ever seen with glowing, psychedelic hot-pink sinks!” Bode: “Oh yeah? The boy’s bathroom has TVs above the urinals.” We’ll call this one a draw.

Winter Park Resort has a fun slope-side tubing hill that is convenient after a day on the slopes. However, if you want huge thrills, drive a few miles down the road to locally-owned Colorado Adventure Park, the largest largest and fastest tubing hill in Grand County (and maybe even Colorado). 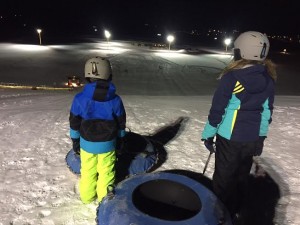 They not only offer Tubing and Double Tubing (starting at $18/hour) but also Snow Scoots, mini Polaris 120 snowmobiles for kids under 5 feet or 130 pounds ($10 for 10 minutes around the groomed track). Purchase a s’mores kit (or bring your own) and warm yourself by the fire.

As we dragged our tubes over to the magic carpet conveyer belt, Hadley looked up at Colorado Adventure Park’s daunting slopes and proclaimed “I’m not going down that.” We retorted “Yes, you are.” “No I’m not.” Once at the top, she was relieved to see there were varying options, ranging from Green (beginner) to Black Diamond (expert) so she relented by taking the easy route. Predictably, she had a blast on this fast, steep and slick hill!

“Now, you’re ready for the Black Diamond run!” Jamie announced. The pitch was almost identical to her previous runs but had two small bumps. “I’m not going down that.” “Yes, you are.” Only this time she needed more forcible convincing and this is where you judge us as parents as Jamie carried her laughing 90-pound body to the hill before they both collapsed in a heap on the snow. The only person not laughing? Me. Note that their chaos caused my tube to shoot down without me. 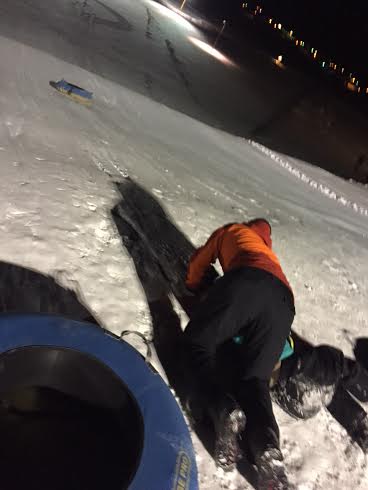 Predictably, she had a blast, as did we all after a memorable weekend in Grand County. 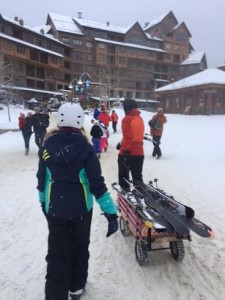 Dec. 31, 2015 – New Year’s Eve Celebration (Hideaway Park). Ring in the New Year with a huge fireworks display over downtown Winter Park. The show starts at 9 p.m., but there’s free sledding at Hideaway Park to keep everyone entertained leading up to the fireworks extravaganza.

Jan. 30, 2016 – Mary Jane’s 40th Birthday Bash (Winter Park Resort & Hideaway Park). This celebration pays homage to Mary Jane Mountain’s namesake, a well-known madam and local lady of the night who lived in the area in the late 1800s. Activities at the base of Mary Jane and Winter Park will keep the “over the hill” party going all day long. The event wraps up with a parade down Main Street starting at 6 p.m., followed by a fireworks display.

For more information on Colorado’s resorts, be sure to go to our Colorado Family Ski Directory. Thanks to Winter Park for hosting!