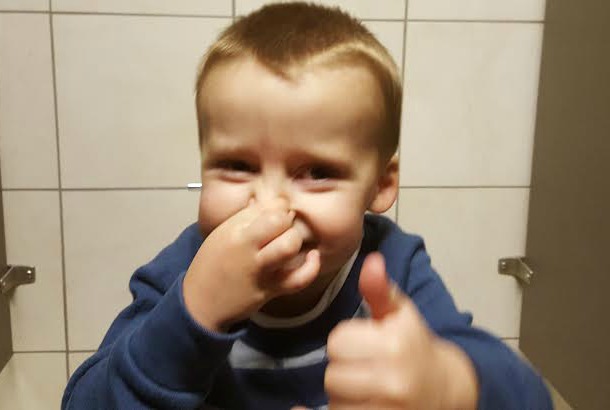 I recently took my son Owen to Sam’s Club to do a little post Halloween/my diet starts on Monday shopping. As I was chasing his sugar high up and down the isles he stops mid stride and says, “Mommy, I have to go potty!” By the look on his face I could tell this situation was about to get serious. I threw him over my shoulder hurdling shopping carts and stiff arming innocent taste samplers, praying I had put him in pants that were easy to pull down.

As we sprinted into the bathroom the first stall was occupied. Respecting the bathroom code of ethics we went a few stalls down and stripped him of his clothing in the nick of time. I stood there eagerly listening for confirmation that I was by far the best mom in Sam’s Club by getting to my child to the bathroom on time….when it happened. The Mystery Pooper from a few stalls down let out a giant fart. I covered my mouth trying not to let my immaturity show when Owen yells, “Do you need my mom to come wipe your butt?”

Channeling my off-duty teacher I gave Owen the silent signal and assured him I would not be wiping anyone else’s tush. Then as we had regained our composure she did it again only this time it seemed to echo throughout the stalls.

Owen shouted, “Good job!! It’s coming! Push your belly.” I was convulsing with “silent” laughter as my son coached the Mystery Pooper through what seemed to be a painful experience. I praised him for being a good friend but told him that people don’t really like to talk in the potty. He smiled and wrinkled up his face, as he does when he is proud of himself, and gave me a thumbs up. Then the finale hit making it impossible to ignore. Knowing now that people don’t like to talk in the potty he smiled at me with his volume on high and said, “Whoa, that was a big one!” At which the lady quickly left the restroom.

As Owen finished up his business, which was a false alarm, I could tell he was thinking about something while he was washing his hands. I asked him if he was ok and he said, “Ya know, that person didn’t wash their hands.” Which made me thankful we had already passed the produce section!

Hope everything came out alright!

Ashley Gustafson is a mom of two young boys (3 and 1), a kindergarten teacher and a stay-at-home comedian. She currently has her own blog thefamilymotto.com where she shares the good, bad, and ugly about parenting, womanhood and humanity