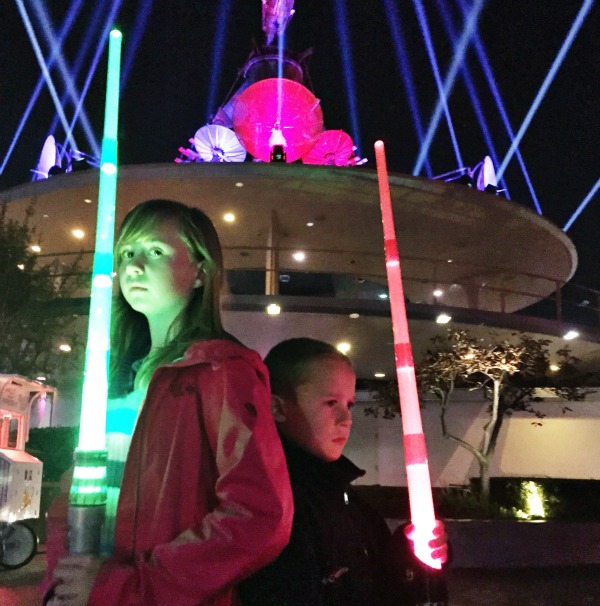 “Season of the Force” Takes over Disneyland’s Tomorrowland

I braced myself for the long, murky descent to the Dark Side on Hyperspace Mountain. “C’mon, Mom. This will be FUN!” my daughter Hadley goaded her spineless mother.

My family was previewing Disneyland’s “Season of the Force,” what Creative Executive at Walt Disney Imagineering Scott Towbridge describes as “it’s basically as if ‘Star Wars’ took over Tomorrowland.”  From the new footage of the not-yet released movie Star Wars: The Force Awakens to re-imagined Hyperspace Mountain to Star Wars: Path of the Jedi at Tomorrowland Theatre, fans have a lot of celebrate with new attractions, thrills, dining options and character encounters. 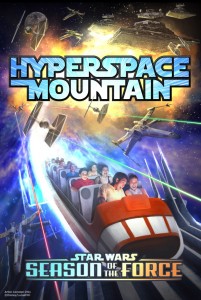 The Season of the Force kicked off on Nov. 16 and here’s what you can expect in Tomorrowland’s galaxy far, far away.

The most hyped change is that Space Mountain has transformed into Hyperspace Mountain. As the only person in America who hated this ride (darkness + rollercoasters = my nightmare), I underwent an evolution…and a revolution. Purists can breathe a sigh of relief because the intergalactic experience is still pitch black but the electronic-infused soundtrack is gone and in its place, an order from Admiral Ackbar to explore the presence of an Imperial Star Destroyer outside of planet Jakku (home to new Star Wars: The Force Awakens character Rey).

After being blasted out of hyperspace and into a barrage of imperial fighters (realistic wall projections), I was on a reconnaissance mission, joining a battle between Rebel X-wings and Imperial TIE fighters with the Star Destroyer looming forebodingly in the distance. The ride came to a climactic end as I was caught in the crossfire of red versus green blasters.

The best news is I was so busy having the time of my life that I forgot to be terrified. There may yet be hope for the galaxy. 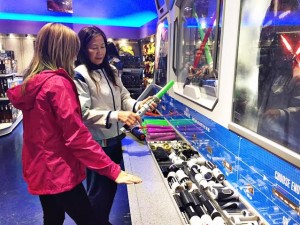 What would Season of the Force be without a new addition to Star Tours, the popular 3D motion-simulated space flight? Without revealing too many spoilers, this popular attraction now features a new scene from Star Wars: The Force Awakens on the planet Jakku with cameos from soon-to-be-favorite characters. Step aside R2-D2: BB-8 is giving you a run for your money!

Following Star Tours, we toured the gift shop where we found signed memorabilia and studio models. The kids customized their own lightsabers starting at $25. Not only do their Jedi weapons light up but also make sounds that correlate to their movements…which are usually targeted right at their aforementioned spineless mother. 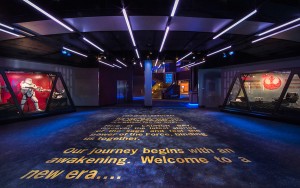 Over at Tomorrowland’s Innoventions building, Star Wars Launch Bar has taken over with special exhibits, recreations of props and costumes, visits with Darth Vader or Chewbacca (warning: the lines are long), sneak peeks at the upcoming Star Wars: The Force Awakens, shop models and so much more. In the Dark Side gallery, check-out Stormtrooper armor and Sith lightsabers, then head over to the Light Side for Rebel flight helmets and Jedi lightabers.

We could have spent hours exploring the various exhibits but my kids’ energy levels were waning…until my son Bode encountered demos of current and upcoming Star Wars video games. And then we couldn’t drag him out of the Star Wars Launch Bay. 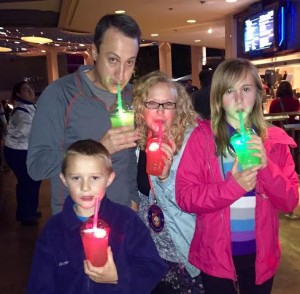 Our fan favorites were the beverages where it came down to good versus evil. My husband and Hadley stayed with The Light Side–all-natural Odwalla lemonade and granny smith apple with yogurt meteors and a souvenir light up Millennium Falcon. Bode and I took a turn to The Dark Side with all-natural Odwalla lemonade and strawberry with a souvenir light up Death Star (both keepsakes glowed for hours).

A family divided yet united in our love for Disneyland’s new Season of the Force.

The Force Lives On 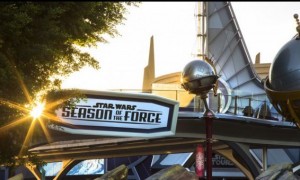 It’s no secret that Star Wars is coming to Disneyland in a big way with their new Star Wars-themed lands. The groundbreaking is scheduled for 2016 in what will be their largest single-land expansion ever.

The park has not announced an end date to Season of the Force. Jedi Training: Trials of the Temple” will open on Dec. 8 with Darth Vader and the Seventh Sister Inquisitor, a new villain from the Disney XD series, “Star Wars Rebels.” Be sure to follow the Disney Park Blog for updates.

Disney is the Happiest Place on Earth…until you get lost in the chaos. Don’t miss 10 ways to navigate Disney’s crowds from Jamie at Love of the Mouse.