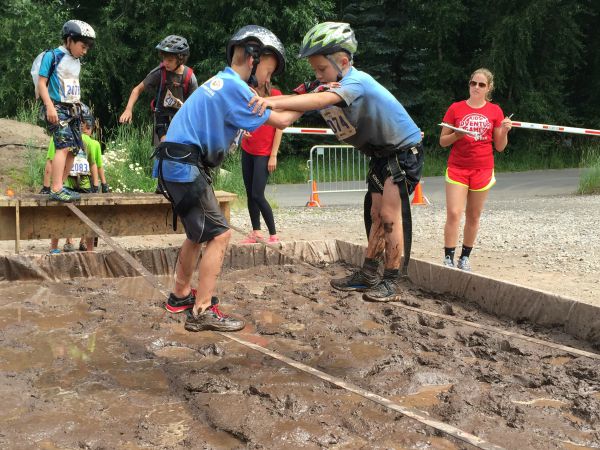 Kids Adventure Games: One parent’s (poor) attempt to keep up in “Coolest Kids Race on the Planet”

“Mom, stop being part of the paparazzi. You’re taking too many pictures!” My daughter Hadley joked as I snapped my camera yet again while she soared across Gore Creek on a zipline.

But I couldn’t stop because she kept right on going in the Kids Adventure Games where kids, ages 6 through 14, experience the thrill of adventure racing in Vail, Colo. And believe me, it was thrilling as you can see from our video:

My children have participated in a number of sporting events but never anything that pushed them to their limits while emphasizing the important of teamwork, problem solving and fun as teams of two tackled a variety of challenges.  From the get-go, this race was different. Prior to getting outfitted in their harnesses, a kids-only safety meeting was held as the racers were debriefed on the race course and equipped with a map. Race founder Bill Mattison later told parents  “Your kids are capable of doing great things if you just let them go it alone.” 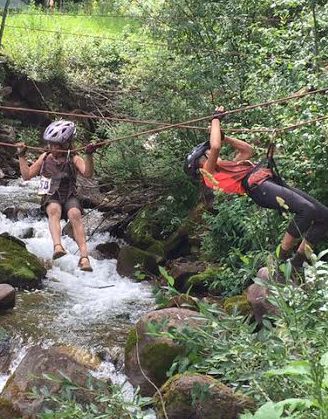 And great things they did.  My son Bode and his buddy Seamus were “Team Awesome” while Hadley competed with his sister Maeve as “Adventure Girls.” Anticipation was palpable as they lined up with their bikes at the starting gate beside Vail Resort’s Gondola One. Racers of all ability levels were staggered a few minutes apart. Adventure Girls started 15 minutes before Team Awesome so the boy’s goal was to catch them while the girls vowed not to be caught.

Parents can observe as much of the race as they want but are discouraged from helping; there were race volunteers at literally every turn in the seamlessly organized race. My plan was to follow the girls while my husband Jamie stuck with the boys. At least that was the plan until Adventure Girls raced their bikes along the Gore Valley Trail leaving me in their dust. A fellow helicopter parent pointed up. “There’s no way to keep up with them on their bikes but you can meet them at Gopher Hill Lift.” I took off up the hill, remiss I wasn’t able to witness the first three checkpoints: Ride through Hay Tunnel, watch them navigate the Slick Wall and then carry their bikes through the Skier Tunnel Obstacles. 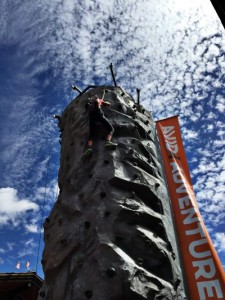 When I saw Hadley and Maeve round the hill, they were covered in mud and delved into the Tyrolean Traverse where they clipped onto a fixed line and pulled themselves across a river. From there, it was onto the Underground River Hike, a Blow Dart Challenge, Jungle Walk and Balloon Launch. I was breathless trying to keep up as they ditched their bikes, grabbed a tube and PDFs as they wound through the village  to the Covered Bridge where they ziplined across Gore Creek before tubing down the icy water. From there, it was onto a climbing wall, mud pit, a cargo net, and they ended with a Slope-N-Slide where all their mud was washed away in their frothy landing (on behalf of mothers everywhere, thank you for that).

My kids had the time of their lives but was it all smooth-sailing? Absolutely not. Seamus crashed his bike as he attempted to descend the loose gravel trail. Maeve hated crawling through the mud. Hadley dismounted her bike to walk down steep sections of the trail while Bode struggled figuring out his technique on the Tyrolean Traverse. The fastest time from some “seasoned veterans” was 45 minutes. My kids posted times that were right in the mix: Adventure Girls finished in 1:16 while the boys were just one minute behind at 1:17.

As they rested and basked in the midday suns electrifying verdant Vail Mountain’, I asked Bode if he wanted to do it again in 2016.

“Yes, but next time we’re beating the girls.”

For more awesome pictures of the Kids Adventure Games, go to their Facebook page.

Family travel: Where to stay, play and eat in Vail, Colorado in the summer.