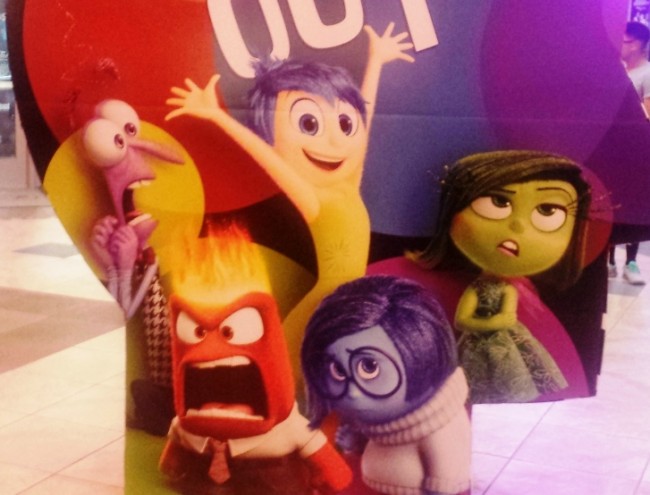 5 Things Parents Can Learn from the Movie Inside Out

(Disclosure: we were guests at the theater.)

Each of us loved the movie, for different reasons. Son liked it for the cartoon-y feel, bright colors, and fast pace. Daughter liked it for pulling on her heartstrings. Father liked it for the multi-layered humor that Pixar is so good at (as in virtually any episode of The Simpson, there is in-your-face kid humor alongside more subtle adult humor).

I, the Mother, liked the film because recently I’ve been self-studying DBT, Dialectical Behavior Therapy, due to my interest in trauma work in the realm of adoption. DBT can be summarized succinctly by the book title, Don’t Let Your Emotions Run Your Life.

Segue to Disney Pixar’s blurb about Inside Out:

Based in Headquarters, the control center inside 11-year-old Riley’s mind, five Emotions are hard at work, led by lighthearted optimist Joy (voice of Amy Poehler), whose mission is to make sure Riley stays happy. Fear (voice of Bill Hader) heads up safety, Anger (voice of Lewis Black) ensures all is fair and Disgust (voice of Mindy Kaling) prevents Riley from getting poisoned—both physically and socially. Sadness (voice of Phyllis Smith) isn’t exactly sure what her role is, and frankly, neither is anyone else.

Inside Out takes Dialectical Behavior Therapy from words and theories into images and a narrative. It’s DBT à la Buzz Lightyear. Along with basic tenets of attachment parenting, here are 5 takeaways (which will make sense even if you’ve never heard of DBT).

1. Every emotion has a purpose.

None are “bad,” though some could be overused or neglected/repressed. The journey within the film involves finding the purpose for sadness. I realized while watching how much effort many of us put into NOT feeling sad. 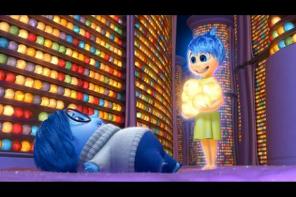 Relationships allow for connection. Connection allows for resilience. Connection is required before claims can be made on a relationships. Before you correct, connect — as one of my tutors is fond of saying. When dealing with a traumatized kiddo like Riley, whose trauma was being uprooted by a life she loved in Minnesota when her family moves to San Francisco, the connection with her parents must be perceived by her before requests of her can be entertained. 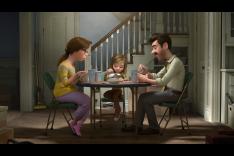 3. Play builds connection and we should invest in connection.

Inside Out portrays each of Riley’s memories as a large glowing pearl. Memories that have great significance or are oft-repeated are called core memories. Joy explains in the clip above that “each core memory powers a different aspect of Riley’s personality, like my personal favorite, Goofball Island.”

Courtesy Goofball Island, many of Riley’s core memories reflect her family’s silliness: food served in a zooming airplane spoon; undies worn on the head; nekkid toddler Riley shaking her patooty to the sheer glee of her parents.

Riley’s core memories show strong connection within her family, which won’t prevent tough times but will make recovery easier when she encounters them. 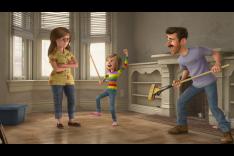 The steady building of Goofball Island, Family Island, Friend Island and the other foundations are necessary for Riley to weather emotions she experiences due to stress-inducing events in her life.

Though in my home we are past the zooming airplane spoon and nekkid toddler patooty stages, we can still invest in Family and Goofball Island infrastructure through games and giggles like jumping rope, getting out the Twister mat, playing charades, bouncing on the trampoline.

The online community known as ALI (Adoption/natal Loss/Infertility) has a tradition of abiding with someone who is enduring a loss or facing a fear. We don’t dismiss the emotions (“it’ll all be OK”) or tell someone to “get over it.” We don’t avoid tough emotions.

We sit with a person while she feeeeeeels it. We walk alongside.

Riley is able to fall back on core memories of being abided with as she deals with her losses and fears. Surprisingly, Sadness plays a key role here, especially when Riley is allowed to feeeeeel her sadness and is supported while doing so. 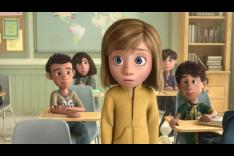 5. Becoming your own observer is one way to be mindful.

I vaguely remember a similarly-themed FOX-TV series in the early 1990s called Herman’s Head. Perhaps turning our emotions into their own entities is an effective mindfulness technique because it turns us into our own observer even as we are also the observed. That helps us retain a rational element while also being intensely emotional. What would it be like to observe yourself in a moment of highly-charged emotion and lend a color, a name, a personality to that emotion? Would that make it easier to stay in control of the emotion rather than allow the emotion to control you? 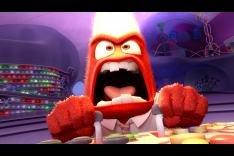 Inside Out by Disney Pixar is a movie my whole family recommends. Foster care social worker/movie reviewer Addison Cooper has reviewed this film also. Check out what he has to say on Adoption at the Movies.

A version of this post originally appeared on LavenderLuz.com.

Lori Holden blogs from metro-Denver at LavenderLuz.com. Her book, The Open-Hearted Way to Open Adoption: Helping Your Child Grow Up Whole (written with her daughter’s birth mom), is available through your favorite online bookseller and makes a thoughtful gift for the adoptive families in your life.

Lori is also available to deliver her open adoption workshop to adoption agencies and support groups.