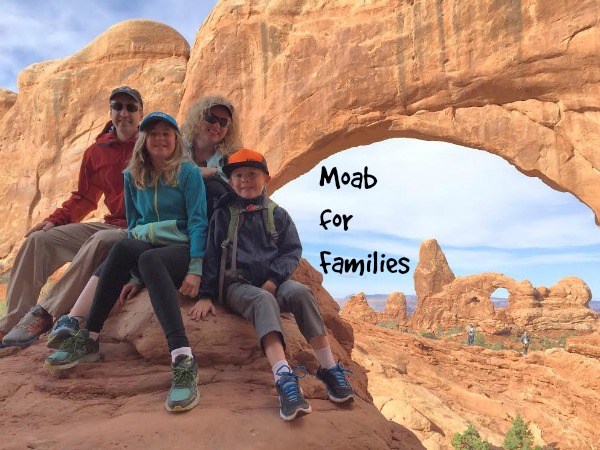 For several years, I was a Salt Lake City-based travel writer and adventure paradise Moab, Utah was my second home. We rafted the Colorado River, mountain biked famed Slickrock trail, 4x4ed Moab Rim, hiked to Delicate Arch at sunrise and cooled down in Mill Creek Canyon’s cossetted swimming holes. Even after moving to Colorado, getting married and having kids, my husband Jamie and I would return annually to backpack Devil’s Kitchen in nearby Canyonlands National Park.

I’ve vowed to take Hadley and Bode but we are busy juggling sports in spring and fall (the best times to beat Moab’s summer heat) and campgrounds are at capacity if you don’t book early. So, I jumped at the opportunity when I heard Kampgrounds of America (KOA), the world’s largest system of open-to-the-public family campgrounds, was doing a summer campaign.  KOA has more than 485 locations in the U.S. and Canada but I was obviously interested in one in particular. 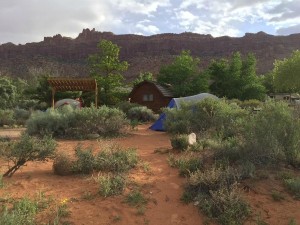 I was admittedly a KOA snob before our trip because I’m accustomed to backcountry wilderness experiences. But since having kids (and several rained out tent camping trips), it was a relief to have clean bathrooms and showers, fun on-site activities and the option to stay in a cozy camping cabin. The Moab KOA is conveniently located on the edge of town, just 5 miles from Arches National Park, 32 miles from Canyonlands National Park’s Island in the Sky District, Dead Horse Point State Park is 32 miles northwest and has three scenic byways (including National Scenic Byway 128 that was rated by Reader’s Digest as one of the “Top 10 Scenic Drives in America”).

My kids are seasoned outdoor enthusiasts but our adventures have been focused on the mountains and beaches so Moab’s red rock desert landscapes were out of this world. 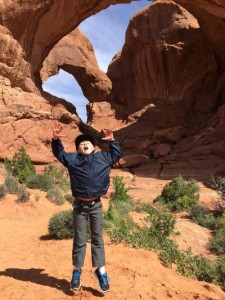 Our first stop was 76,518-acre Arches National Park, home to the world’s largest concentration of more than 2,000 natural sandstone arches. As we drove the 18 mile paved road, their mouths were agape at the dizzying array of pinnacles. “Look, are those the Three Gossips? I’m pretty sure I see the Petrified Dunes!”

Arches has an abundance of hiking trails–from short walks around Balanced Rock (0.3 mile) to more adventurous hikes like Delicate Arch, featured on Utah’s license plate, and the 7-mile loop through Devil’s Garden. My all-time favorite area is the Fiery Furnace. This strenuous three-hour hike winds through a labyrinth of contorted burnt-orange sandstone walls, towers, spires, fins and arches. The catch: heavy restrictions are in place and visitors must accompany a ranger-guided tour or obtain a hiking permit at the visitor center and we were too late. (http://www.nps.gov/arch/planyourvisit/programs.htm)

We settled upon hiking the Windows area, which has several short, interconnecting trails. The kids were in heaven climbing North and South Window arches that are formed out of the same sandstone fin, while also scaling castle-like Turret Arch and Double Arch, the tallest in the park. I was in heaven for these views. 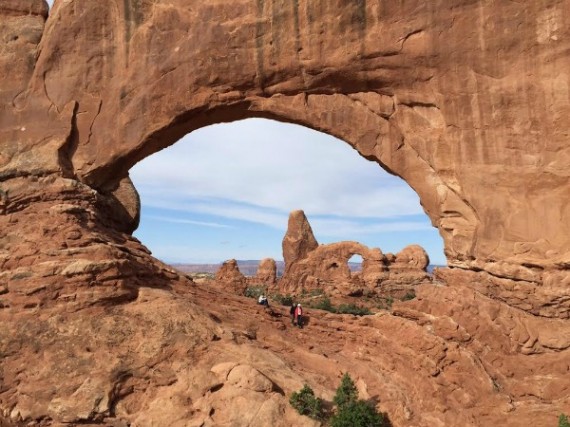 Duly noted: There is no “settling” in Arches.

(Click Page 2 to keep reading about our mountain bike adventures and a red sand sea!)