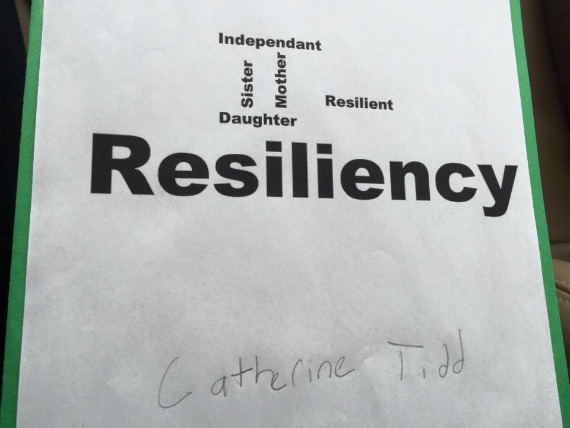 Motherhood: What They See is What You’ll Get

I’ve always been consumed with my kids’ perception of me.

Actually, I don’t know if perception is the right word. I mean, I don’t worry if they’re judging me (I have a 13-year-old daughter – I think that’s a given right now), but I’ve always wondered how they interpret me.

Does that make any sense?

Let me back up. When my husband died seven years ago, my kids were only five, three, and one years old. And from that moment…I felt like I was “on” all of the time; kind of like their own private performance of life.

I had witnessed enough in my life to know how I wanted to grieve in front of them. I had been around others who had lost spouses who seemed to almost make their young children their partners in grief. I’d been around adults who had experienced a loss when they were little and their parents seemed to demand that their children feel the impact of it the same way they did. And I’ve had friends who couldn’t seem to understand that their kids might grieve differently; and that caused frustration on both sides.

So, when my husband died, how I lived my life and how my children perceived what I was doing was a huge focus for me. I would cry in front of them in almost a calculated way. I don’t mean for that to sound so cold, but it’s true. I would cry to let them know it was okay to cry, but I wouldn’t sob (I waited until I had some private time to do that). If I was cranky one day, I would be honest with them and tell them that I was angry because I missed Daddy, thereby hopefully letting them know that grief shows itself in many ways.

Of course, this mindset goes beyond grief. As the cloud began to clear, I did my best to carve out a life for myself not only because I needed to, but because I wanted my children to see that. I wrote a book. I started a website. I found a new job. And they came along for the ride.

When I started to date, I did it very carefully. I rarely let anyone meet my kids and when I did, it was always someone who treated me well, who was respectful, and who I felt would help me set the example of what a relationship could be. It was important for my son and daughters to see what mutual respect looks like.

But like most parents, I wasn’t sure if I was succeeding in my plan. I mean, it’s not like our kids walk up to us and say, “Mom, I really appreciate what a mature, feeling, and capable woman you are. You have truly set the example I need to go out and change the world.”

We haven’t had that conversation yet.

But a few weeks ago, when I went to my son’s parent/teacher conference, I got an unexpected pat on the back.

“And here’s his vocabulary project,” his teacher said, pulling out a folder. “You must be so proud.”

I looked at the cover and said, “Wait. Is this about me?”

“Well, then let me get you a box of tissues. You’re going to need them.”

I looked at the project and saw the word RESILIENCY on the cover. The report on the inside detailed everything I’d done in the last seven years – raising kids as a single mother, writing the book, starting the website – and what he wrote shocked me. All along I’d hoped that the kids were picking up on a little of what I was trying to do, but he seemed to have absorbed it all.

“You have a great kid,” his teacher said, crying along with me.

That afternoon, when he got off the bus, I gave him a huge hug and told him how honored I was to be the subject of his report. And the truth is that “honored” doesn’t even begin to cover it. In one elementary school report, my son validated me. He didn’t know it, but his paper was like getting the best employee review I’ve ever gotten in my life (only better).

He, of course, blushed at this praise and then trotted off to find his skateboard.

They’re watching us, you know. All of the time. And they’re taking with them more than the “I love yous” we say every day or the times we punish them for their own good. They’re watching us live our lives and learning more from that than any class they’ll take in school.

What do you want them to see?