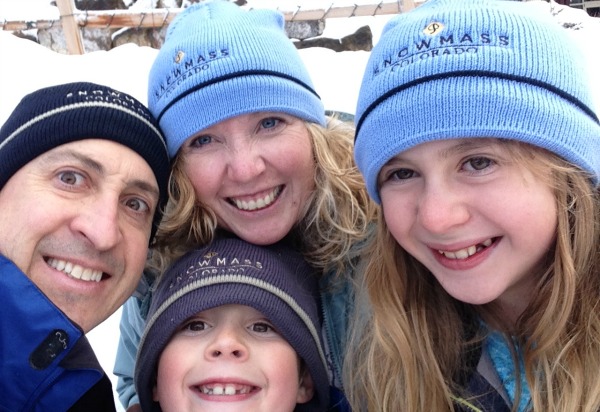 Travel: Why Snowmass and Buttermilk are the ultimate family vacation 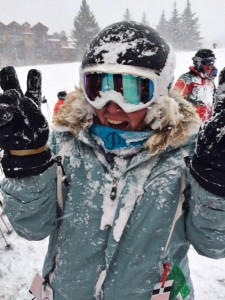 “I can’t believe I really did it!” My son Bode’s cheeks were flush with excitement and big, feathery snowflakes. It was our second day in Aspen and he had conquered Mount Everest. Or, in 8-year-old vernacular, he had skied his first black-diamond run at Buttermilk.

“The Power of Four” resorts–Aspen Mountain, Aspen Highlands, Snowmass and Buttermilk–are renowned destinations but it wasn’t until we experienced the latter two resorts’ family-friendly offerings that we were hooked. Not only does Snowmass offer a staggering amount of kid activities including their “Very Important Kid” program and Ullr Nights, but its counterpart Buttermilk’s gently rolling hills and new children’s center is now my top Colorado resort pick for families with young children.

Several resorts claim to be world-class but at Snowmass, we felt like the world had literally descended upon us as we shared chairlifts with charming Europeans and so many enigmatic Brazilians we could have sworn we were at Carnival.

And it was a party! When I’ve extolled the virtues of a winter vacation to Colorado’s ski areas, I’ve had several friends counter, “I don’t like to ski.” Believe me, in Aspen it doesn’t matter–you’ll have as much fun as a family on the slopes as you do off. Here are just a few reasons why.

Buttermilk is rated the easiest of Aspen Snowmass’ four mountains, making it a veritable kid playground. Parking is free at the nearby lot and the base area is as easy to navigate as the mountain’s seven lifts and 43 trailers that are predominantly rated for beginners and intermediates. Because Buttermilk caters to kids, our ski school drop-off was seamless and Hadley and Bode had a blast with their instructors. In addition to fine-tuning their skills (and giving Bode enough confidence to ski his first black diamond), they raved about the camaraderie with the staff. When we skied with the kids at the end of the day, Hadley pointed out fox tracks under the Summit Express lift and 14,018-foot Pyramid Peak shrouded in clouds. “And when we ride the West Buttermilk lift, do you know what the lift operators do at the midway loading station? If you pretend to fall asleep, they throw a snowball toward you to wake you up!”  After just one day on the mountain, both kids felt like insiders. 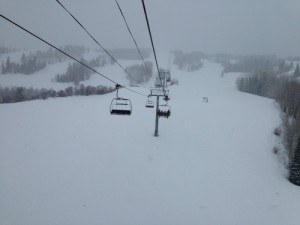 But it wasn’t just about the kids. Jamie and I spent much of the day on the eastern slopes of Tiehack where the runs are longer and steeper.  Aspen was in desperate need of snow and we perfectly timed our visit with six inches of fresh powder. For the majority of the morning, we had fresh tracks on almost every run (a miracle on a fresh powder day) because most everyone stayed with the easier pitches. Buttermilk also boasts an Olympic-size half-pipe commonly seen on the Winter X Games and two smaller terrain parks. I started gloating about my 0.0005 feet of air after launching off a jump at the Red Rover terrain park until a class of local 8-year-olds nonchalantly knocked a few 180s out of the park. Tough crowd.

The big news at Buttermilk this season is the new 7,500-square foot state-of-the-art children’s center at the base of Buttermilk that is conveniently the first building off the parking lot. Though there are plenty of opportunities for kids in the 7-12-year-old program at the Hideout, the facility primarily supports the 6 and unders and my too-old kids were salivating over the many nooks, crannies, hideouts, jungle gyms, rope bridges, a lookout tower and public playroom. When kids aren’t out on the snow, the indoor play areas help them develop their coordination skills, foster their imagination and invite them into a world of mountain adventure. 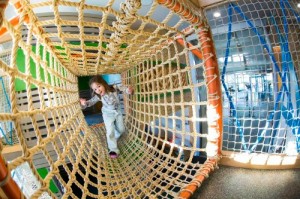 Out of Aspen’s four area resorts, 3,362-acre Snowmass has something for everyone—from long, cruising green and blue runs to glades to double black extreme terrain to terrain parks to excellent learning areas. Aspen Skiing Co. beautifully caters to kids and mine fell in love with the Treehouse, Snowmass’ 25,000-square-foot children’s center with seven interactive nature-themed rooms intended for specific ages as well as a 700-square-foot climbing room.

If that doesn’t make your kids feel valued, the “Very Important Kid” (VIK) program will. Special perks for VIKs are free activities from 3:30 p.m. – 4:30 p.m., which include shows, crafts, clowns and Snowy the Mammoth. Afternoon and evening activities such as dances, movies and game nights feature 2.5 hours of supervision by licensed professionals registered with the state and children’s meals for $35. Be sure to also check-out the free Snowmass Ice Age Discovery Center in Snowmass Village—my kids spent an hour exploring this small museum and marveled at the ice age discoveries.

I celebrated my birthday at Snowmass and though some might enjoy a distinguished night out on the town, I preferred family fun at Ullr Nights. Every Friday from 5:30-9 p.m. Ullr, the Norse God of Snow, comes to life. For just $8 per person (kids 3 and under are complimentary), we were whisked up the gondola to Elk Camp’s hoarfrost land of Norse mythology with live music, bonfires, ice skating, treats, entertainment in The Tent and guided snowshoe tours hosted by ACES. 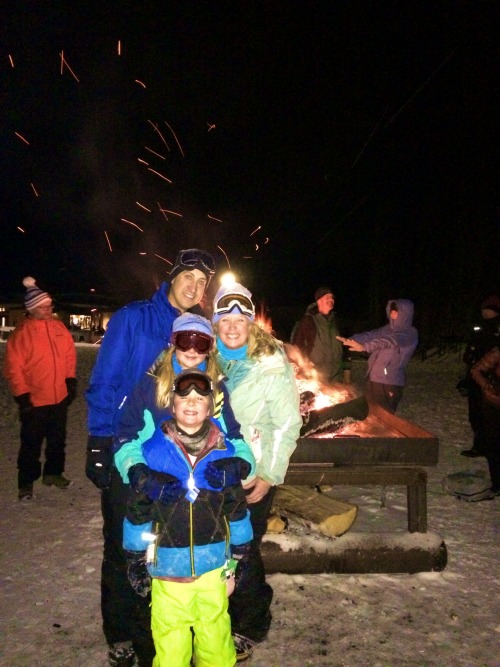 SnowBikin’. Upon arrival, Bode grabbed a Strider snowbike, took the magic carpet up the mountain and skated ?Slid? Biked down the hill. (Whatever the verb, the result was the same: exuberance). Children’s bikes are free with admission; for intermediate skiers ages 12+, a snowbike tour is offered for $69. 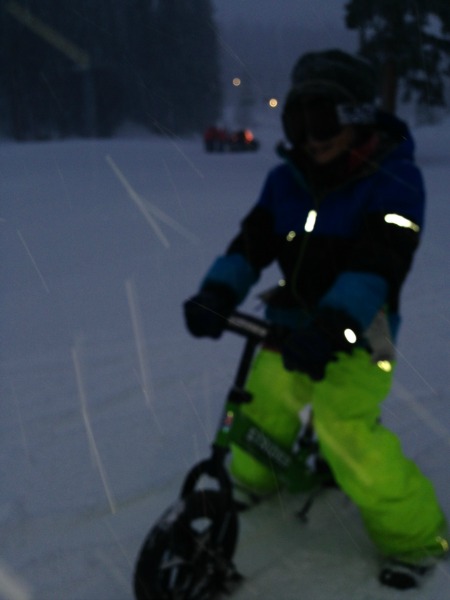 Slip Slidin’ Away. What would Ullr Nights be without a gargantuan snow sculpture of Ullr’s face with a slide running through the middle of it? I was content to watch Hadley and Bode at play until they played they taunted me to follow. “What’s the matter, Mom? Too old?” If careening down Ullr’s nasal passages proved that I’ve still got it on my birthday, so be it. I climbed the slippery slope, lay on my back, crossed my arms and shot outta there like a booger gone bad. Turns out I’ve still got it…and also got a blanket of snow up my back at the bottom.

Lift-serviced tubing is a welcome new addition this year and cozily lit multiple lanes are carved into The Meadows at Elk Camp. We linked up, went solo, joked with the staff and laughed as we banked off the turns. Tubing is an additional $24 and be sure to pre-reserve your time. 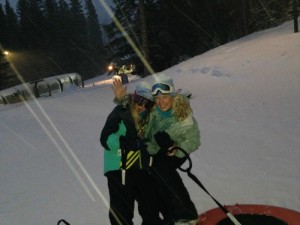 We had a blast at Ullr Nights but my favorite part of the evening was our ride down the mountain in our gondola. “It was a dark, snowy night,” I whispered and our impromptu ghost stories began as snow flew around our frosty expanse and the wind clinked through patches of crystals and aspens. Enraptured, the kids wove in their own ghost stories, a befitting end to a mysterious night that gives homage to all things snow.

It’s rare when hip and family-friendly go together but that’s what you’ll find at the Limelight Hotel. Located within walking distance to Aspen Mountain and Main Street, this 126-room boutique hotel with contemporary mountain décor has two hot tubs, a heated pool, complimentary shuttle around town and an included gourmet continental breakfast. After a long ski day, order some wood-fired pizza in the lounge and be sure to play some board games by the fire–the perfect way to unwind!

Kids ski free at Aspen/Snowmass with purchase of a minimum 3-day adult lift ticket, and earn a free ski rental with companion adult rental. Equipment rentals include ski and snowboard packages and individual items. Book by March 24, 2104: Valid April 1 – 5, 2015. Thanks to Aspen/Snowmass for partnering!