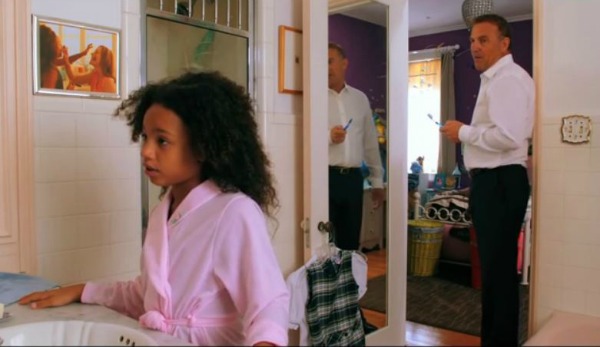 Though Black or White earns its adoption stripes through simple kinship adoption (Kevin Costner and Octavia Spencer vie for custody of the granddaughter they share, Eloise, played by the luminous Jillian Estell), the bigger message for adoptive families is the devastating split a person can experience when divided in two by color, race, biology and/or biography. And how not dealing with tough emotions such as anger and grief rarely means they resolve on their own.

Eloise’s mother (Kevin Costner’s daughter) died during childbirth, and Eloise’s father (Octavia Spencer’s son) has been absent due to substance abuse. Still, Eloise’s black and white families have formed a détente. Eloise lives with her well-off white grandparents in their tony home and neighborhood. In addition, Eloise has much access to the ebullient and extensive clan headed by her black grandmother, Rowena, who lives in South Central LA.

But the détente is upended with the sudden death of Costner’s wife, Eloise’s grandmother and primary caretaker.

On the race issue, some will dismiss the film as joining a long line of “white savior” films, such as The Blind Side and Losing Isaiah. Some may consider it patronizing.

But writer/director Mike Binder (The Upside of Anger), whose bi-racial nephew was the inspiration for Eloise, wanted to open up a dialog on race, even if it wasn’t a perfect one. Late in the film, Costner’s Elliot Anderson responds in a court scene with Binder’s crystallized message. When asked if he has a problem with racial prejudice, Elliot replies, “Is that the first thing I notice when I see a black man? Skin color? Yes. It’s not my first thought that counts. It’s my second, third and fourth thoughts.”

Adoptees may note that this story focuses on the needs and wants of the grownups in a situation, more so than on the child (who, in Eloise, is notably without trauma issues for one who has experienced such loss). And that gripe would be warranted.

But this is also where the film shines. For it shows the grownups with all their foibles and flaws. It shows how their wanting the best sometimes brings out their worst. We see repressed emotions, addiction, loss, hubris, stereotyping, and urges to win no matter the cost.

Ultimately, we discover the key to redemption: allowing long stuffed-down emotions to be felt and dealt with. We see these nuanced and flawed people aim to overcome their Either/Or tendencies to embrace a Both/And paradigm for the girl who joins them together. (Perhaps instead, the film should have been titled Black AND White.)

In this, the film’s flaws are also redeemed. Learning how to heal the splits inherent in adoption is a worthy endeavor for all grownups involved.

Lori Holden blogs from metro-Denver at LavenderLuz.com and can be found on Twitter @LavLuz. Her book, The Open-Hearted Way to Open Adoption: Helping Your Child Grow Up Whole, written with her daughter’s birth mom, is available through your favorite online bookseller and makes a thoughtful gift for the adoptive families in your life.