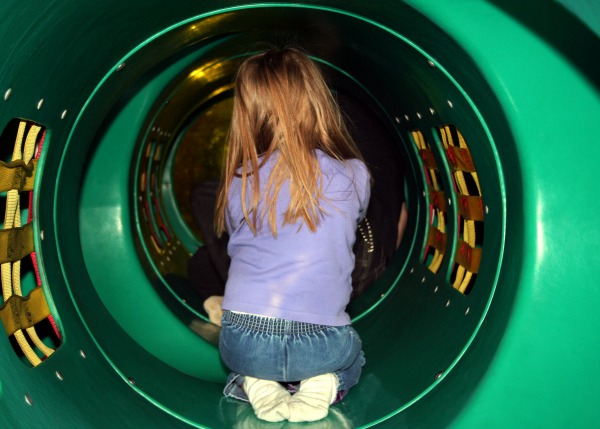 It’s no wonder they don’t want to leave those play structures!

When my daughter was young, one of our favorite places to play is a local play-area at a Rec Center near us. The indoor play-structure was built with a tree house theme in mind, and all of the tunnels stretch out above the room, like the branches of a tree. It’s great because the parents can stand or sit down below and chat while their kiddos crawl through miles and miles of tubing above. There are many different compartments, most all with windows overlooking the room below. There are different slides throughout so that you can easily get down…only to run around like a crazy person on the squishy floor of the play area and climb the spiral stairs up again.

Claire and I went there many times. Our Moms’ Club et there on occasion (more now, in colder weather, since meeting at a park to play is so nice-weather-dependent). It was great to meet my friends and chat while Claire played with the friends she knew in the group and meet new friends who happened to be playing there that day as well.

At first, Claire didn’t want anything to do with the looming structure. The stairs were too enclosed, and the tunnels too confining, and she’d get three steps up and start crying for me. The whole thing turned into more of a stressor than a playful relaxing time, so I opted not to go to the playdates at the center. Our group had so many activities during the week that it was fine to pick and choose.

Eventually, we started going again. Claire started getting more and more comfortable with going up the stairs into the structure by herself, and the more she did it, the more confident she became. Sometimes she’d venture out on her own, and sometimes all it took was an older or more confident explorer to say, “Hey! Come play with me!” and off they’d go.

And, then, we reached a new level….

Once, we were meeting some of our Moms’ Club members at the center. Claire was having a blast playing with the other kids. It was nearing the time to go, and one of the moms had to leave. She and her little boy, Ryan, said their goodbyes, and another friend and I continued with our chatting, watching our kids, Claire and Heath disappear up into the structure.

Ryan is a little older than Heath and Claire, and he is awesome at being a good helper. Ryan is an expert at finding other kids in our group and bringing them back down, or helping them get to the slides. He’s also great at answering the “Where are they now?” question that we holler up at him every now and then.

So, Ryan is gone, and we can’t find Heath or Claire anywhere.

There is only one entrance to the play area room, and we know they didn’t escape. We saw them go up the spiral stairs, but we can’t see them in the cool helicopter section nor the awesome car with the spinny-flower steering wheel. Where could they be?

We start calling for them.
No answer.

We listen for them.
No luck.

And, with that, I ascended the spiral stairs into a completely different world. No wonder they didn’t want to come down! I mean, come on!! This is so cool! The different colored tubes make the air glow, and there are so many different ways to go and things to see!

I crawl over to a couple different areas we know they like, but I can’t find them.

Just as I’m trying to decide which way to go next, I see a little bitty girl just crying her eyes out. There is another little girl sitting with her. She looks at me and says, “Ashley wants her mommy!”

And, then I can hear a mommy calling for Ashley.

Poor little Ashley has figured out how to get up the stairs but doesn’t know what to do next. We’re all congregated near the top of one of the slides. “This is Ashley?” I ask the older girl. She tells me it is, and Ashley just sobs harder. Knowing that I would want someone to help Claire if she were in a similar situation, I had to act.

I call down the tube-slide, “Is Ashley wearing all pink?”

“Oh, someone’s up there!” I can hear the relief in the woman’s voice. “Yes! Yes, Ashley is in all pink!”

I am horrible at guessing ages, but I would have a hard time believing that Ashley was much older than a typical one-year old. If that. I didn’t want to be responsible for tossing her down the slide, and the thought of negotiating the spiral stairs with a squirming toddler in my arms was daunting.

Then I got an idea.

“If you don’t mind, I’ll bring her down the slide. Would that be okay?” I yelled down to Ashley’s Mommy.

“You would!? That would be great!”

Luckily, this particular slide is very gradual, and I was able to slowly wind my way down without dropping poor little Ashley, who was screaming at the top of her lungs by this point.

As I got to the bottom, and got off the slide, I handed Ashley to a very grateful Mommy.

“Well, the good news? Your daughter does NOT like going to strangers! The bad news? I still have no idea where the two are that I actually went up there to find.”

During the whole ruckus with Ashley, I thought I’d heard Heath’s mom call up to me that she’d found him, but now, I didn’t see them anywhere! No Heath. No Claire. And, now I couldn’t even find my friend.

So, I reached into my pocket for my cell phone and called her. She popped her head out of the bathroom and told me that she’d found Heath, but couldn’t resume the search for Claire until they’d taken care of a more pressing matter.

When they were done in the bathroom, she told me that Heath thought Claire might be in the other section…the section where the bigger kids go. I’m not even sure how to get into that section, and Claire had never really played over there. This time, my friend went in.

I stood down below holding Heath’s hand while my friend searched for Claire.

Claire was playing with a new friend she’d met in the tunnels and had no idea why we felt it necessary for the fun to end.

Adults are no fun, and if given a choice, she’d stay in the tubes all day, thankyouverymuch.

It took some creative coaxing on the part of my friend, but soon they emerged, and we were all reunited.

The comedy routine we were inadvertently trapped in had ended, and it was time to say goodbye to the magical world of the play-structure. I can only imagine how funny the whole thing seemed to an outsider.

We have since returned and were able to leave without incident. I’m not sure if my “you HAVE to come when we call for you” speech has really sunk in or if we’ve just been lucky enough to catch them before they get pulled back into the tunnels by unseen forces.

And, now that I’ve been up there, I know what we’re dealing with…and it’s amazing that we ever get them down.