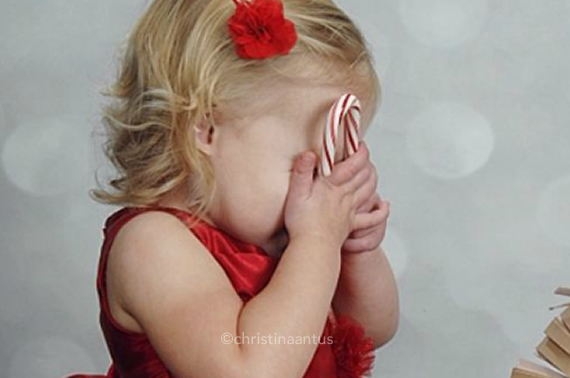 I stood looking at the holiday photos of my friend’s children. They were sitting still with perfect smiles. Not a single hair was out of place. Their clothes were on.

I wondered how they did that.

Maybe the children in the photo weren’t real.

I mean, they weren’t climbing on the lighted umbrella or asking people in the waiting area if they can have gum. There’s no photographic evidence of one inadvertently slapping the other in the eye. Instead, both children are sitting. Together. They even have their arms around each other. The last time my toddlers exchanged anything resembling an embrace was when they rolled off a beanbag chair together. Fighting over a bendy straw.

Our family, like most, has a collection of ridiculous attempts at capturing moments in time. Six of those moments have my husband’s left hand in them. Two have his shoe. Taking the right photos of small children is all about timing. Mine, apparently, is almost always off. It’s next to impossible to photograph my toddlers. At least 90 percent of my photos are a blurry streak. The other ten percent are of them smearing food in their hair.

I get anxious for holiday photos. It’s a stressful situation, like diffusing a bomb. I get one hour to get each child photographed individually, then together before someone has a meltdown, and my photos feature creatures from Dante’s Inferno.

A couple Christmas’s ago, we had an unsuccessful photo shoot because of the following five mishaps:

1. I couldn’t find the tiny sparkly bow in my infant’s hair because she ate it.

2. I wanted to test the limits of the already nonexistent attention span my children have. So, I dressed them at the photo studio. And by “dressing” I mean wrestling them into clothes while they struggled like alligators with supernatural strength.

3. My other toddler quit the shoot and made a pilgrimage to the men’s sock department.

4. My baby, who smiles at air, sat with a blank look on her face. No expression outside of a tiny strand of drool that stretched from her bottom lip to her top sweater button.

5. Our family portrait session consisted of us chasing our toddler around until we were sweaty and exhausted. By the time we got to actually taking photos of our family, she was crying and our six month old was eating a plastic snowflake she pulled off the backdrop.

The next year I did two things differently:

1. I only scheduled photos for just the two girls—no one cares how my husband and I are aging.

2. I appropriately scheduled the photo shoot for Friday the 13th, because I’m a big believer in bad omens.

It turns out the older your kids get, the easier this whole photo thing is. For example, My former infant was thrilled to see a rocking horse and ye-hawed her way through the shoot.

My three-year-old, on the other hand, wasn’t as easily impressed. Not with the horse. Or the camera. Or the photographer. Or me.

She didn’t smile at all, but she did stay in one spot. Eating her candy cane and watching indifferently as the photographer, and I Heckled and Jeckled our way to idiot status. Level red. Trying to make her smile.

She only wandered off once, returning to the sock department. She did a great job picking out some socks for Daddy so, at least this year she wandered to that department with a purpose.

Christina has two toddlers and one on the way—a baby, not a toddler. When she’s not writing, she’s neglecting laundry, making mediocre meals for her family and answering the same question 147 times in a single minute. You can find her hiding in the closet and eating candy at: The Mediocre Housewife.