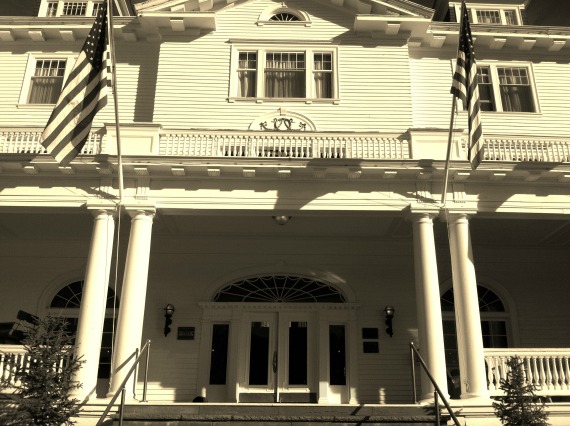 An Unexpected Visitor: A Night at The Stanley Hotel

As a single mother of three children, every time I take my kids on what I call a “mini-vacation” (because I’m not brave enough to go on a full-size one) I’m always worried that one of us won’t make it back.  This could be for several reasons:

But this last mini-vacation that took place over my kids’ fall break added an extra element of fear – because I took them to the charming, but haunted, Stanley Hotel in Estes Park.

Now, I don’t know why I thought this was such a brilliant idea because I am afraid of my own shadow.  My kids, who are thirteen, ten, and eight-years-old, surpassed me in the terror department some point in the last couple of years and they’ve all graduated into the PG-13 stage while I have firmly been planted in PG since high school.

“What are you watching?” I asked in disbelief one day when I walked into my TV room and listened to a woman explain the paranormal activity she had witnessed in her charming Pennsylvania home.

“The Haunting,” said my eight-year-old, nonchalantly chomping on a handful of popcorn.

So, why a woman who still sleeps with a nightlight decided she should take her kids to a haunted hotel is still somewhat of a mystery to me.

I guess it was because I made the reservations in the safety of my own home while it was still daylight as I scrolled, misty-eyed, through the beautiful pictures online.  The Stanley Hotel holds great family memories for me (as a child my parents would occasionally drive us up early in the morning to enjoy Sunday brunch), but I had never stayed there.  And so, reservation confirmed, I eagerly told the kids my plan.

“Did you know that you can sometimes hear someone playing the piano in the Music Room even when it’s empty?” my son asked me, his face lit with excitement as he scrolled through Wikipedia.

“Really?” I asked, starting to feel a little nervous.

“Yeah, and that room 217 is supposed to be one of the most haunted rooms there!  Do you think we’ll get that one?”

Good golly, I hope not.

By the time we hit the road, the kids had already downloaded a Ghost Radar app on their iPods.  While I marveled at the beautiful architecture and enjoyed the gentle breeze that floated through our room, the kids had their heads bent over their screens telling me, “There’s a ghost there.  And there.  Oooo.  I think there’s one in the bathroom!”

Not what I wante

They did take a break from ghost hunting for a little while so that we could play cards and have our own little Happy Hour on the wide front porch (hot cocoa for them, a glass of wine for me.  At that point I needed it), but before long…we were back on the hunt.

She stood outside the room which was located in a particularly dark corner of the hall and checked her radar.  That this hotel and specific room was so creepy it inspired Stephen King to write The Shining was not lost on me.  But I decided 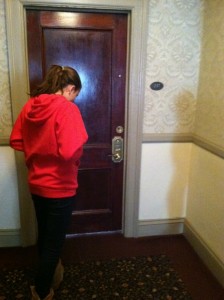 to focus on how cute it was that the kids were so into their quest.

So I took a picture.

It wasn’t until later that night, when I took my phone out to review all of the photos I’d taken that day, that I noticed a very distinct glow around my daughter’s head as she stood at the door of room 217.  It looked a lot like those pictures I’d seen in the TV shows that my kids loved and I feared.  And when I showed it to my daughter, she had only one thing to say.