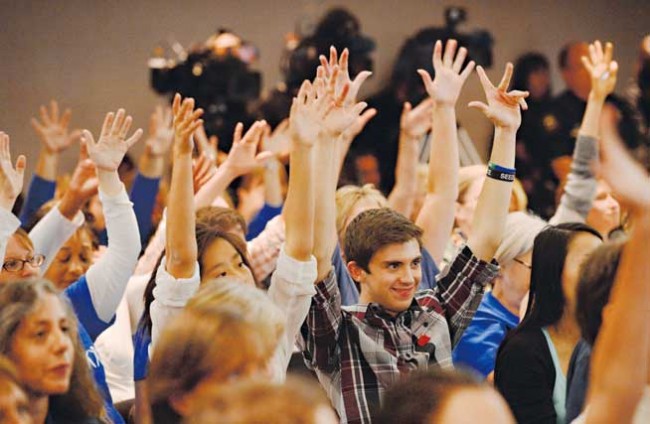 Hundreds packed the Jefferson County Board of Education headquarters building and the grounds around it Thursday night to decry a controversial proposed curriculum review committee that has been at the center of nearly two weeks of student protests.

By the end of the evening and after a bitter debate over the timing of the vote, the board approved by a 3-2 margin a compromise measure that would reorganize existing curriculum review groups in the district to involve more student, teacher and community voices.

The decision effectively scuttled a plan introduced late last month by board member Julie Williams to create a curriculum review committee that would have relied on teaching materials that promote patriotism and “positive aspects” of U.S. history and avoid encouragement of “civil disorder, social strife or disregard of the law.”

The meeting — the first since the curriculum controversy that has attracted national attention burst onto the scene — began with more than two hours of public comment.

The board room was packed, with camera crews from media outlets from around the country lining one side of the room and reporters on laptops in front of the dais.

Williams, who was part of a conservative majority elected to the school board in November, began the evening by defending her plan as an attempt CLICK TO KEEP READING