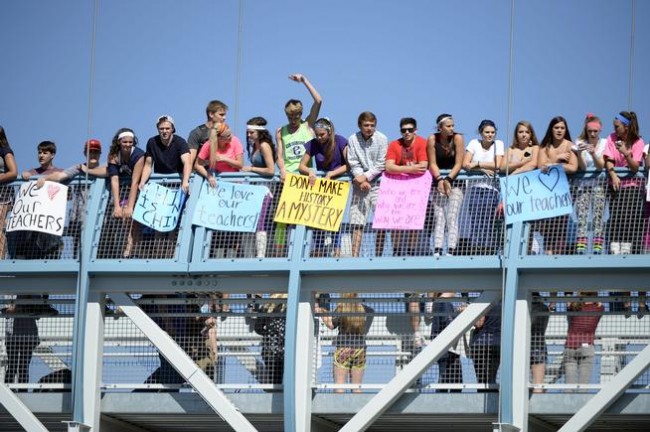 Fourth day of walkouts with massive protest near Columbine High

While teachers and the Jefferson County school board are busy blaming each other for this week’s student walkouts and protests, the teens are happy to take credit.

“People think because we are teenagers, we don’t know things, but we are going home and looking things up,” said Savanna Barron, a senior at Lakewood High School, as she waved a sign on Kipling Street on Thursday morning. “If they don’t teach us civil disobedience, we will teach ourselves.”

By Thursday, the fourth straight day of protests, students had improved their organization, message and size, rallying a group of roughly 1,000 at a combined Columbine and Dakota Ridge high school walkout that saw kids crowd onto a pedestrian bridge over South Wadsworth Boulevard.

A movement that started with cardboard signs and random chants has moved to bullhorns and even a slogan: “It’s our history, don’t make it mystery.”

Facing criticism about skipped classes — including from passing motorists at Lakewood High who shouted at the demonstrators — some students opted to use their lunch or free periods to protest.

“It’s an unexcused absence, but I don’t care,” Tayler Lopez, a sophomore at Columbine and a protest organizer, said Thursday. “This is more important than truancy.”

Hundreds of high schoolers across the county have hit the streets protesting a proposed curriculum committee that would call for promoting “positive aspects” of U.S. history and avoiding or condoning “civil disorder, social strife or disregard of the law.” They’re also upset about an evaluation-based system for awarding raises to educators.

Controversy has swirled around the Jefferson County school board after the election of a conservative majority to run the 85,000-student district. Action began last week when two schools closed because 50 teachers either called in sick or took a personal day.

The issue has become so heated that Thursday the Jefferson County Sheriff’s Office said deputies were investigating threats against school board members’ children. Sheriff’s officials declined to elaborate.