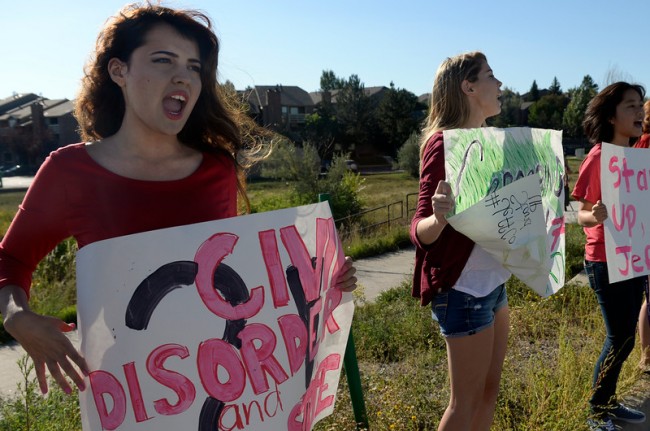 Discord over the direction of Jefferson County Public Schools spilled into classrooms and onto sidewalks Friday after an unusually large number of teachers either called in sick or claimed personal days at two high schools, prompting the district to cancel classes.

A total of 50 teachers from Standley Lake and Conifer high schools were absent, out of 117 teachers at both schools. Without enough substitutes, Superintendent Dan McMinimee made a “quick and difficult decision,” saying there wouldn’t be enough adults in the buildings to provide a safe and secure environment for students.

At a news conference in which he apologized for inconveniencing parents, the first-year superintendent called the teachers’ choice “unfortunate” while declining to speculate on their reasons.

“While I respect the opportunity for free speech and expression, I think there are other ways we can work through these differences without putting kids in the middle,” McMinimee said.

The Jefferson County Education Association, the teachers union, said it did not organize

any action but understands the frustrations of teachers and others about what it described as a pattern of secrecy, wasting taxpayer dollars and disrespecting community priorities.

More disruption could be coming. An organized “sick-out” may be planned for Monday, district leadership wrote in an e-mail to staff Thursday that warned that such actions are illegal under state law.

Tensions in Colorado’s second-largest school district have been high since the November 2012 election of a conservative slate of three school board candidates who became the majority.