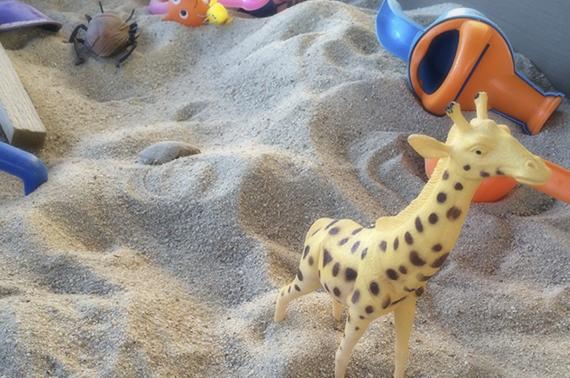 My children both have a very odd way of interacting with their sandbox. I’m not sure if this is something they’ve discussed behind closed doors, or how each of them came to behave exactly the same around it. There’s clearly a set of predetermined rules they both follow:

2. Seek out tools, sharp things, and barbecue paraphernalia.
including but not limited to: rakes, rocks, plants from the garden, bark from the tree or knobs for the grill. Put these items in the sandbox.

3. Put rocks in the sandbox.
Bury them. Add more. Do this until the sandbox resembles a course gravel pit.

4. Spend time picking grass blades.
When you have enough to recreate an entire second lawn, toss it all into the sandbox. Mix well.

5. Eat the sand.
Because we don’t have $40 worth of snacks anywhere inside the house.

6. Push your hands underneath the sand as far as you can until half your body is buried.
Then, eat more sand.

7.  Play everywhere except in the sandbox.
This includes inside trees, under the wheelbarrow, behind the old Christmas tree and trash cans. Unless there’s the threat of another child potentially interested in the sandbox, there’s no need to play with it.

8. Set a goal to empty the entire sandbox onto the ground.
This is done by way of throwing sand or transporting it across the yard in small plastic teacups.

9. When possible, find a way to get water into the sandbox before you’re intercepted by a grown up.
Because the only thing more fun than throwing sand, is throwing wet sand.

10. Inconspicuously pour sand in hat, jacket, pockets and shoes.
Distribute it around the inside of the house in various areas to keep things interesting for Mommy.

For not really ever playing with it, they sure do spend a lot of time playing around it.

I clean up a lot of sand. Which you might expect if there was an ocean in the backyard, but there isn’t. Just a sprinkler.

The other day I found a pile of sand on the stair railing inside. I’m beginning to think that somewhere in my house, there’s a secret indoor sandbox being built. If that’s the case, it looks like I might save some money on snacks.

Christina lives in Denver with her husband and two daughters. She’s been featured on the Erma Bombeck Writers’ Workshop, Scary Mommy, What the Flicka and recently added: “first-place winner in the 2013 Boulder Writers’ Workshop Comedy Writing Contest,” to her list of accomplishments—it’s above changing a diaper with only one hand and answering the same question 147 times in a single minute. You can follow her third pregnancy journey over at Pregnancy & Newborn’s Knocked Up Blog or find her rambling on The Mediocre Housewife.