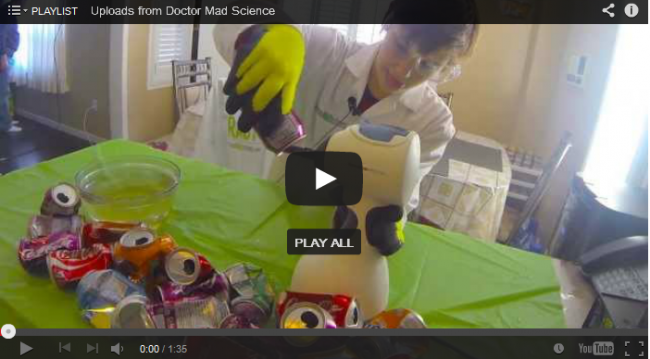 12 YouTube science channels to keep your kids learning this summer

YouTube is brimming with quirky, entertaining and educational science programs. As much of it is produced for a general lay audience, there’s plenty of appealing content for precocious kids and parents.  Here are some of the best YouTube science channels to check out.

Whiteboard illustrations explain every-day questions like if video games make you smarter and if plants think. During the Olympics, learn more with videos on topics like why Olympic records are always broken. Not all the content is kid appropriate though. For example, there’s a video on if sex affects athletic performance. The video merely acknowledges people have sex and focuses on non-titillating questions like how many calories sex burns and its effects on energy, anxiety levels and alertness, but parents might want to keep an eye out.

From The Field Museum in Chicago, this channel explores science through the museum’s vast collections and exhibitions with host Emily Graslie.

Though not focused exclusively on science, DNews covers topical questions and current event issues like why zoos kill healthy animals, in reference to the euthanization of a healthy, two-year-old giraffe at the Copenhagen Zoo, and the physics of figure skating, in time for the Olympic game. There are more evergreen topics like how carbon dating works. Parental guidance strongly recommended as there are some not-for-kids content, such as a study that finds women who fake orgasms also cheat.

This channel is produced and hosted by a 12-year-old named Jordan, who also happens to have autism. Jordan uses every-day household items to perform simple science experiments, like making boiling water freeze instantly in cold air and creating a fruit battery. Caution to parents: Jordan’s experiments may instill in your children the desire to explode things in your microwave.

The channel illustrates common physics questions via whiteboard. Learn what gravity is, how magnets work and  the science behind rainbows. The show occasionally touches on other science disciplines like evolution versus natural selection and the Schrodinger’s Cat thought experiment

Of course NASA has a YouTube channel — it has several, actually, including separate channels for their various research centers and even the Hubble Space Telescope. Keep up with discoveries, launches, profiles and more.

This television series from the 1990s wasn’t produced for YouTube, but we’re including it anyway. See clips from the charismatic host explaining everything from static electricity to how an eyeball works.

8. The Periodic Table of Videos

This channel focuses on chemistry with a video for every element in the Periodic Table — hence the name. In addition to the elements, videos focus on science news and related topics, like boiling water and exploding hydrogen bubbles. Host Martyn Poliakoff literally looks like a mad scientist.

This channel is fun,fast-paced shorts on science news, history, and more. Visit weird places like the Waitomo Caves. Meet great minds in science like Dmitri Mendeleev. SciShow also produces a talk show and a series on the fundamental forces of physics.

Veritasium covers everything from why venomous animals live in warm climates to the question, if we can really touch anything (don’t assume the answer is yes). Host Derek Muller performs expert interviews and science experiments, debunks misconceptions and even performs a few songs (seriously, you will never think of atomic bonding the same way again).

VSauce is my 10-year-old’s favorite science channel, which means exactly what you’d think. The focus is on the weird and the mind-boggling. Find out what does human taste like and why we kiss. (That’s about as racy as it gets.) Sibling channel VSauce2 focuses on general craziness found around the Internet and VSauce3 is about gaming.

Once you’re hooked, you may even want to keep watching your favorite science shows even after spring finally arrives. Most of these are updated weekly, if not daily. Subscribe and you and your kids can get a regular dose of smarts.