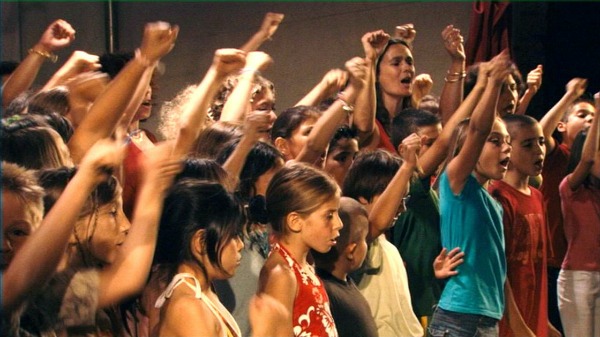 Kids: You Say You Want a Revolution?

I’m beginning to understand why ideas and education are the first things to be controlled in oppressive regimes. Education leads to…thoughts. Ideas. Connections. Expression. Discussion. And yes, Revolution.

I, being the Head Mama around here, am in a position of Exalted and Sovereignly Great Dictator. Especially when the playroom and bedrooms look like they’ve been ransacked by a bunch of gremlins with a penchant for making cardboard box civilizations and scattering the contents of every toy container to the four corners.

Today is particularly oppressive for the kids, as I am leaving to take care of some business for a few days, and Head Daddy is large and in charge when I’m gone. He needs a clean and tidy house like I need Dove Chocolate and Cherry Coke. I have them on a strict schedule of 15 minutes cleaning with a 10 minute break. Must. Clean. Up!

After lunch, I sent them upstairs to clean some more. They both did their best to argue why they shouldn’t have to/needed less time cleaning/needed a longer break. I announced in my best Exalted and Sovereignly Great Dictator voice, that I was boss and what I said GOES.

However, I’ve been lax in the information I’ve allowed into their impressionable young minds. Without giving heed to the implications, we’ve been reading books about Benjamin Franklin, the American Revolution, Colonial times, and the Founding Fathers. They both gave each other a look and retreated upstairs. I heard a lot of chatter between them and could decipher words like, “King George”, “Colonists”, “England”, “Democracy”, “Declaration of Independence”, and “Not Fair!” [photopress:revolutionsword.jpg,full,pp_image]I knew what this meant. It meant that our recent trip to Williamsburg had really sunk in, and they were going to use the things they learned there against me.

Sure enough, a few minutes later, they both came down with handmade signs.

“Give us Breaks or Give us Death!”

My 8-year-old son stepped up and announced they were forming a revolution against my Exalted and Sovereignly Great Dictatorship. Outrageous! Preposterous! Unthinkable! But not for the two musketeers. They’d learned enough to know they had Rights. And the ability to Self Govern. And a duty to stand up against an oppressive regime. Even one that just gave them Oreo’s with their lunch.

We came to a peaceful resolution. They agreed I could stay the Exalted and Sovereignly Great Dictator if they could reallocate their break times. So far, so good, but I’m alarmed at the seeds of discontent our foray into Revolutionary America has sowed. That’s the problem with Democracy. Once the idea takes hold, it’s impossible to unteach it.

Guest blogger Tiffani lives with her three right-brained kids and one left-brained hubby in Erie.