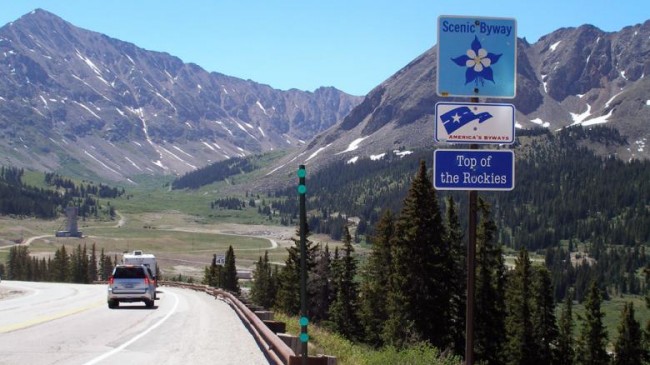 Spending a long amount of time in the car for a road trip can sometimes be uneventful, but not a road trip through Colorado. The state is home to 25 Scenic and Historic Byways (11 of which are also America’s Byways) celebrating their 25th anniversary in 2014 along with other roads and passes that offer amazing views. Summer through fall is the perfect time of year to travel the byways, roads and passes of Colorado.

Following is a sampling of Colorado’s scenic drives with the best views and activities provided courtesy of the Colorado Tourism Office.

Cache la Poudre – North Park Scenic & Historic Byway (Fort Collins). This drive, which means “the powder’s hiding place” in French, is 101 miles (three hours) following the Poudre River up to Cameron Pass. The route was once used by settlers connecting the northern plains of Colorado to the Green River settlement in Utah. Now, the route is a place to drive and see raging river rapids ideal for rafting, Colorado’s state mammal, the bighorn sheep, and amazing views around the bowl-shaped basin of North Park at the top of Cameron Pass. Don’t forget your binoculars, as North Park is a bustling habitat for wildlife.
Frontier Pathways National Scenic & Historic Byway (Pueblo). After beginning this drive in Pueblo, pass along the high plains to see buttes and flatlands before hitting the south side of a local favorite, Lake Pueblo State Park, a 4,646-acre lake. Another 25 miles down the road is the town of Wetmore, which separates the Great Plains from the edge of the Rockies. At Highway 96 and Highway 165, the byway splits west and south. The western route hits the San Isabel National Forest and sister towns Silver Cliff and Westcliffe. The southern route leads to the modern-day structure Bishop Castle and Colorado City, which is a great place to eat some local cuisine. Keep an eye out on this 103-mile (three and a half hour) drive for gray fox, mule deer, elk and pronghorn.
Gold Belt Tour National Scenic & Historic Byway (Cañon City). The Gold Belt Tour is 131 miles (five to six hours) of rolling mountain parklands to deep rocky canyons. The drive was once the “Roads to Riches” historic route, connecting Cripple Creek to Victor Mining District and was also the world’s largest gold rush to Florence, Cañon City and Florissant. The drive climbs from 5,500 to 9,500 feet in elevation and visits Phantom Canyon Road, a road with green spotted canyons and eerie ghost towns. A great place for a rest stop towards the beginning of this trip is at the Florissant Fossil Beds National Monument to see fossils dating back 34 million years.
Highway 160 over Wolf Creek Pass (Pagosa Springs). For a shorter scenic drive, Highway 160 over Wolf Creek Pass will not disappoint. The highway stretches 41 miles (about one hour) between South Fork and Pagosa Springs. Views from the highway include portions of Weminuche Wilderness within the San Juan National Forest, the Continental Divide Trail and the 100-foot Treasure Falls. The hike to Treasure Falls is one for the whole family and a great way to get out and about. 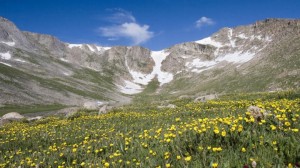 A wildlower basin along the Mount Evans Scenic Byway near Idaho Springs, CO

Mount Evans Scenic & Historic Byway (Idaho Springs). This Scenic Byway is also the highest paved road in North America at 14,130 feet above sea level. Along the 49-mile (two hour) road, alpine lakes, granite walls, mountain goats and bighorn sheep can all be seen. On the way up, views of glacier-cut valleys and many sharp, rocky peaks can’t be beat. On the way back down, stop in Idaho Springs at the Indian Hot Springs resort to relax and enjoy the hot springs.

Peak-to-Peak Scenic & Historic Byway (Estes Park). Established in 1918, Peak-to-Peak is Colorado’s oldest Scenic Byway. From Estes Park to Black Hawk, this 55-mile (two hour) drive passes through Rocky Mountain National Park (celebrating its 100th anniversary in 2015), Golden Gate Canyon State Park, Arapaho and Roosevelt National Forest and Eldora Mountain Resort ski area, all of which make for a beautiful drive full of mountain and high-country lake scenery. Take a detour through the ghost towns of Hesse and Apex, and walk around for a rest stop, or stop west of Eldora for an easy hike to Arapaho Glacier.
Pikes Peak Highway (Colorado Springs). In 1915, Pikes Peak Highway was built and allowed locals and visitors to reach the summit of Pikes Peak. Today, the 19-mile drive (about two hours) is filled with lakes, mountains and wildlife along the climb from 7,400 feet to 14,115 feet. There are also many activities to choose from on the way up, such as hiking, biking and boating. Once at the top, try a world-famous donut at the Pikes Peak Summit House — it is the only donut made at an altitude above 14,000 feet.
Top of the Rockies Scenic and Historic Byway (Leadville). Colorado’s two tallest peaks, Mount Elbert and Mount Massive, can been seen from this scenic drive. For 115 miles (four to five hours), pass the beginning of the Arkansas River, the town of Twin Lakes in San Isabel National Forest and Leadville, the highest incorporated city in the United States. Get off the beaten path for a bit and bike Shrine Pass, which is the perfect place for viewing wildflowers, or go trout fishing in Missouri Lake. This Byway also includes Independence Pass.
Silver Thread Scenic & Historic Byway (Lake City). The Silver Thread Scenic Byway passes through two of Colorado’s historic districts, Lake City and Creede. Each has many sights worth seeing. Lake City has one of the largest collections of preserved buildings from the 1870s, and Creede has the Creede Repertory Theater, which USA Today called “one of the best places to see the lights way off Broadway.” Also along this 120-mile (two to four hour) route, see the 800-year-old Lake San Cristobal, and don’t forget to wander off a bit on Forest Road 510 to see stunning views of North Clear Creek Falls. 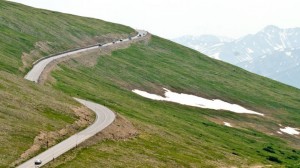 Trail Ridge Road (Estes Park). Take a drive through Rocky Mountain National Park on the 48-mile (two to three hour) Trail Ridge Road. Starting in Estes Park, hop on the highest continuous auto road in the country to see elk, glacier-carved valleys and amazing peak summits. The Continental Divide can also be seen from this route. Due to its high altitude and heavy snowfall, the route is only open from late May to late October. Don’t forget to stop by The Stanley Hotel in Estes Park, which inspired Stephen King’s novel “The Shining.” Also, head to Grand Lake, which is the largest natural lake in the state of Colorado.

West Elk Loop Scenic and Historic Byway (Gunnison). The West Elk Loop Scenic Byway is one of Colorado’s longer drives, but worth every minute. This 205-mile (eight to 10 hour) drive passes through three beautiful mountain towns — Marble, Gunnison and Crested Butte, each of which has something truly unique. See where the marble for the Lincoln Memorial and Tomb of the Unknown Soldier in Washington, D.C., came from in the old mining town of Marble. Gunnison offers a culture mixing the ranching community and a university, while Crested Butte offers amazing views of wildflowers, as is designated the “Wildflower Capital of Colorado.” Also along the drive, pass by Black Canyon of the Gunnison National Park.